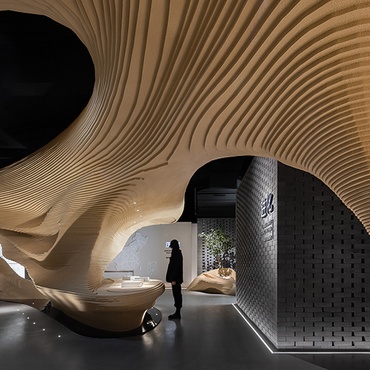 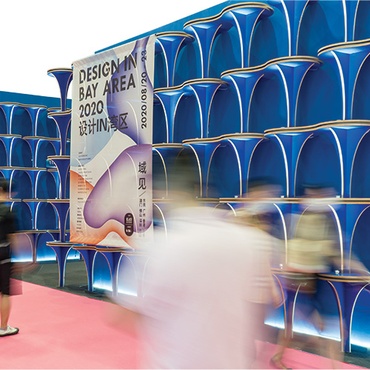 3+2 Designstudio and A Lentil Design Rethink the Greenhouse in an Exhibition Space in Taiwan
Photography courtesy of 3+2 Design Studio. Some thought leaders are devoted to curbing climate change. Others are engineering ways to ... 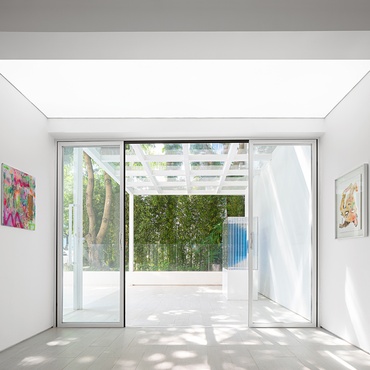 A Former Residence Morphs into Light-Filled Gallery in Shenzhen, China
The interior of KennaXu Gallery connects to the yard, offering space for communal gatherings. Photography by Kevin, Benmo Studio.  Surrounded by lush ... 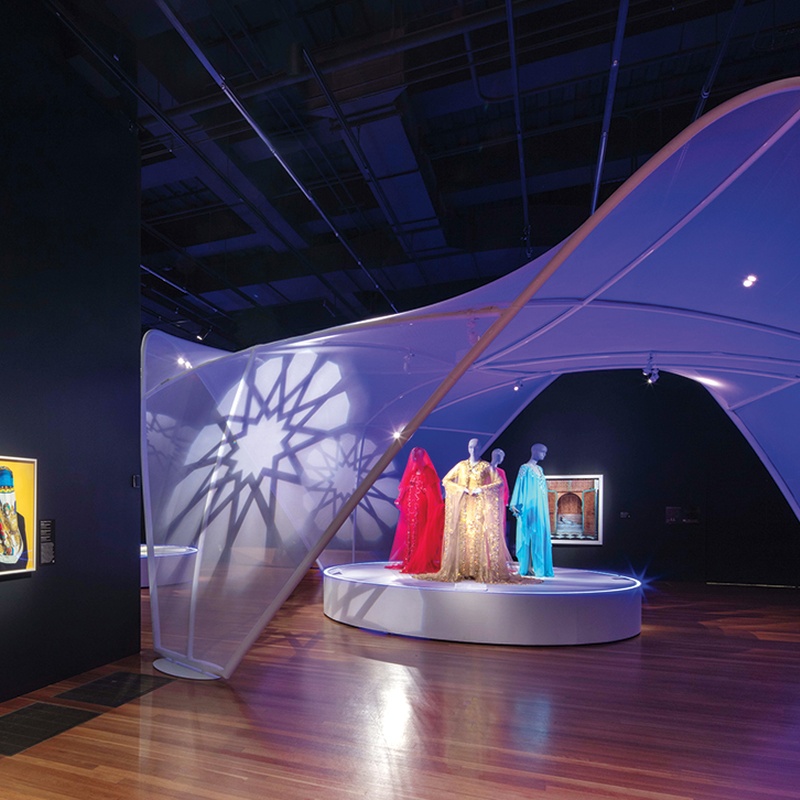 From futuristic showrooms to extravagant displays of fashion from icons of the industry like Louis Vuitton and Karl Lagerfeld, Interior Design put the spotlight on many worthy exhibitions throughout the year. The following 10 are our picks for top exhibitions of 2019. They include the Best of Year award winner for Art Exhibition and well as one of the honorees in that same category. 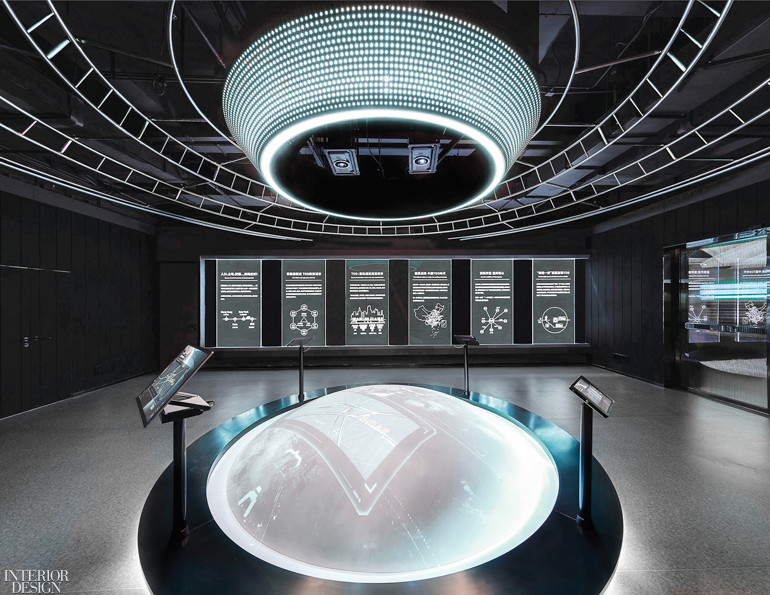 This is no orbiting mothership. Instead Karv One Design’s Hyperiôn Light Year is a slick marketing exhibition made to sell commercial space in the Longfor Hyperiôn Project, part of a 5-million-square-foot Chinese real-estate development centered around Chongqing’s new high-speed rail node. The exhibition won a 2019 Best of Year award for Art Exhibition. Read more about this project 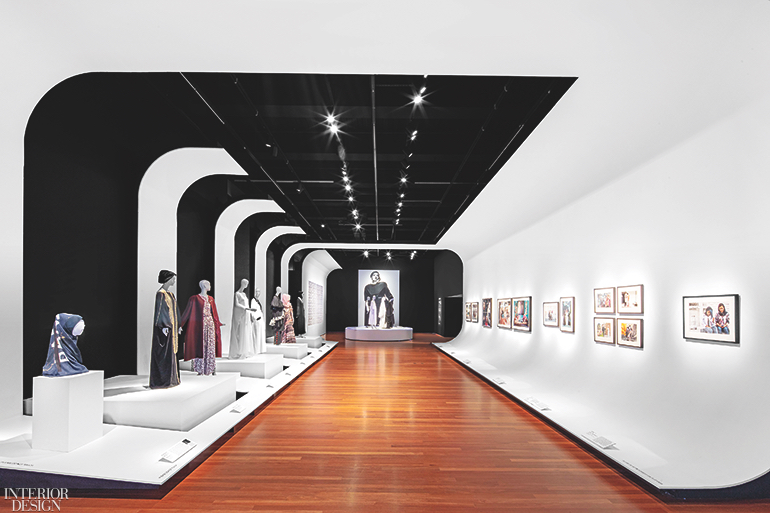 Sisters Gisue and Mojgan Hariri have designed build­ings, furniture, and even jewelry. But they had yet to conceive an installation as large and impactful as “Contemporary Muslim Fashions,” which occupied 12,000 square feet of the de Young Museum in San Fran­cisco and had 105,000 visi­tors during its 3 1/2-month run. The exhibition was a 2019 Best of Year honoree for Art Exhibition. Read more about this project 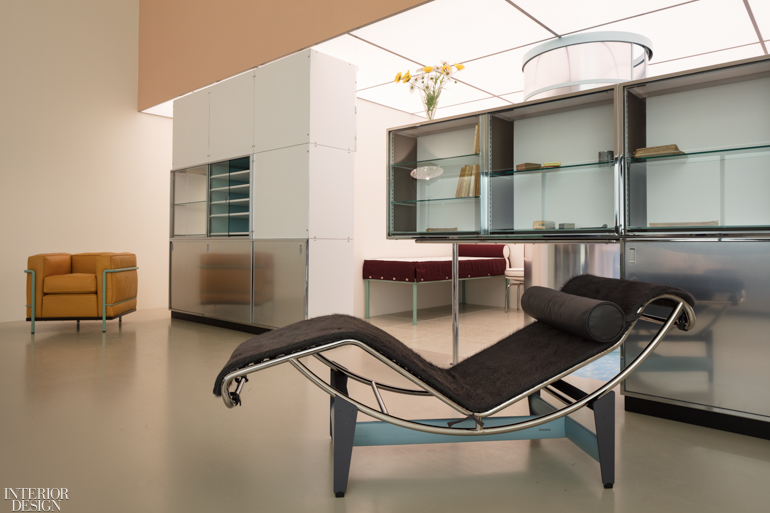 For "Le Monde Nouveau de Charlotte Perriand" ("Charlotte Perriand: Inventing a New World"), an exhibition at Fondation Louis Vuitton in Paris, Cassina—the only company authorized to manufacture furniture by the early 20th-century visionary of modern furniture design—collaborated with Pernette Perriand Barsac to reconstruct some of Perriand’s pioneering works. Read more about this project 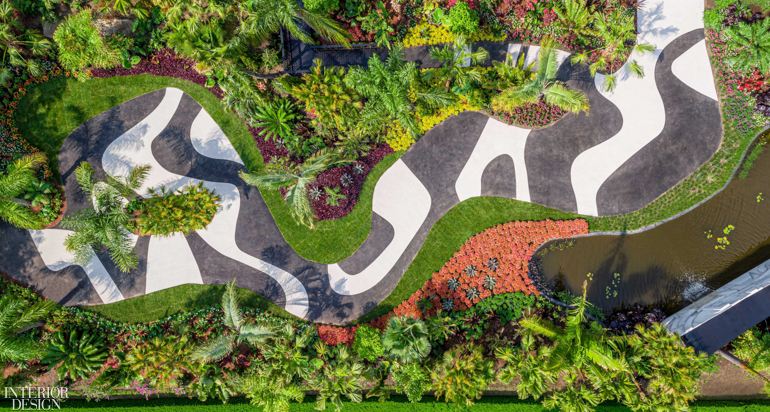 The exuberance of Brazilian Modernism was on full display this past summer in the Bronx as “Brazilian Modern: The Living Art of Roberto Burle Marx” debuted at the New York Botanical Garden. The largest botanical exhibition ever mounted by the NYBG, it combined a horticultural tribute to Burle Marx—one of the most significant Brazilian artists and landscape designers of the 20th century—with insights into his vibrant artwork and textiles and his advocacy for plant conservation. Read more about this project

Ettore Sottsass at the Institute of Contemporary Art Miami 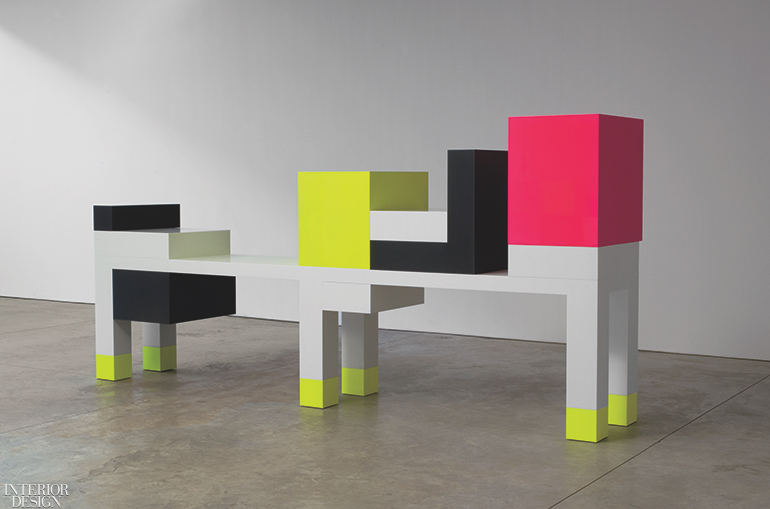 The lines between design and art have been progressively blurring since the late 20th century. Even in southern Florida: Art Basel Miami Beach and Design Miami/ have been coinciding since 2005. The Institute of Contemporary Art Miami further solidified the symbiotic relationship with the launch of a biannual exhibition dedicated to exploring postwar and contemporary design. Read more about this project 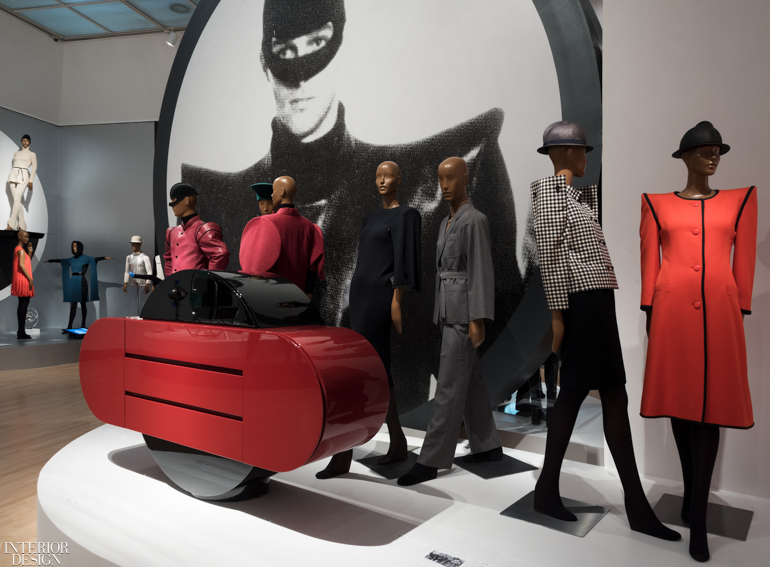 Space-agey French fashion landed in New York—just in time to coincide with the 50th anniversary of Apollo 11’s lunar voyage. “Pierre Cardin: Future Fashion,” at the Brooklyn Museum, traces the seven-decade career of the 97-year-old fashion designer. The retrospectivem which runs through January 5, 2020, includes some 170 objects dating from the ’50s to today. Read more about this project 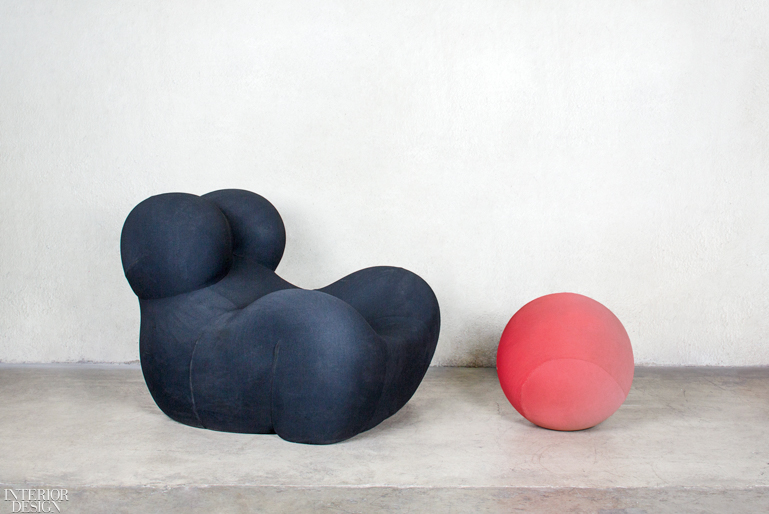 At age 79, Gaetano Pesce’s influence is still going strong. B&B Italia celebrated the 50th anniversary of his iconic Up chair this year by exhibiting an enormously oversize version of it in Milan’s Piazza del Duomo during Salone del Mobile. But from October 24 to December 14, Friedman Benda in New York focused on the pivotal period of his career from 1968 to 1992 with “Gaetano Pesce: Age of Contaminations.” On display were rarely seen works from historic collections and early prototypes, such as his 1970s red-epoxy model for the monumental Carenza Bookcase. Read more about this project 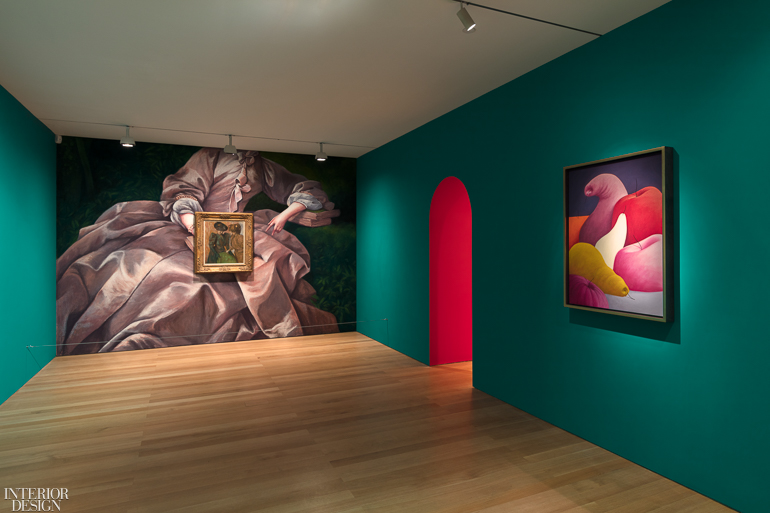 Stop by the FLAG Art Foundation in New York and it may feel like you’ve stepped into the past. As in three centuries ago past. It’s the effect of “Nicolas Party: Pastel,” which runs through February 15, 2020, and features four enormous murals by the young artist along with a dozen other works by the likes of Mary Cassatt, Edgar Degas, Loie Hollowell, and Chris Ofili, all either from or inspired by the Rococo period—and all in soft pastel. Read more about this project 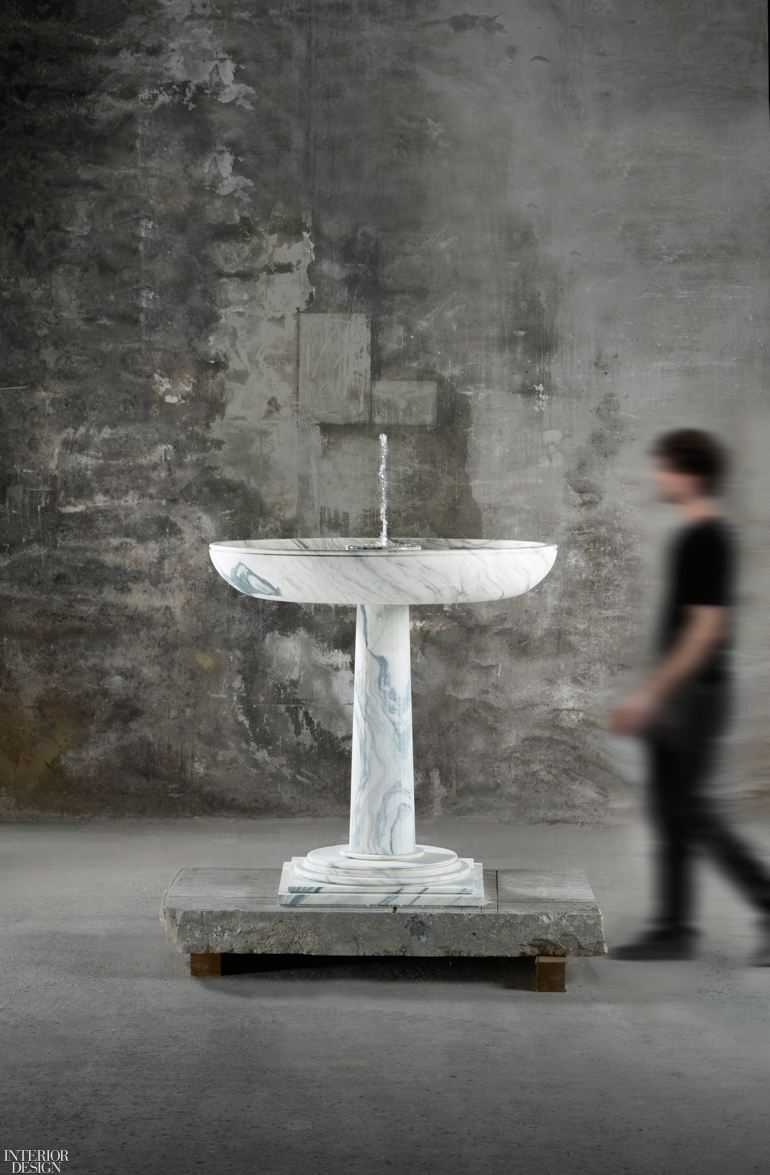 He was best known as the sunglass-wearing creative director of Chanel. But the late Karl Lagerfeld’s creativity extended beyond fashion to illustration, photography, and design. The latter was on display in “Architectures,” an exhibition of his sculptural furniture that ran at Carpenters Workshop Gallery in Midtown through November 15. The 20 pieces in the show—ranging from ashtrays and lamps to tables and a fountain—are all rendered in either black or white marble, evoking a contemporary architecture with Greek origins, and sculpted, faceted, and polished in Italy. Read more about this project 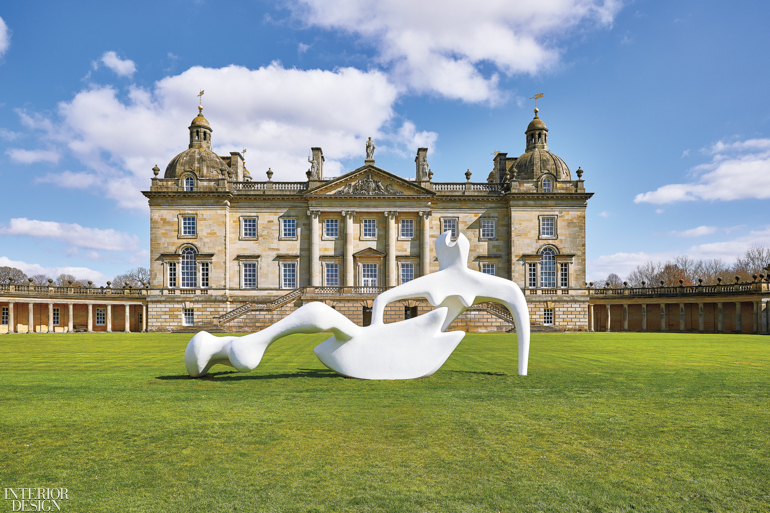 Nearly two centuries divide them. But Houghton Hall and Henry Moore are two of England’s national treasures. The former was built in the 1720s by prominent Georgian architects Colen Campbell and James Gibbs for Great Britain’s first Prime Minister, Sir Robert Walpole; the latter is considered the U.K.’s greatest sculptor of the 20th century—and the two were brought together this past summer for all to enjoy. Read more about this project