Working It: Rockwell's NeueHouse is More Club Than Office 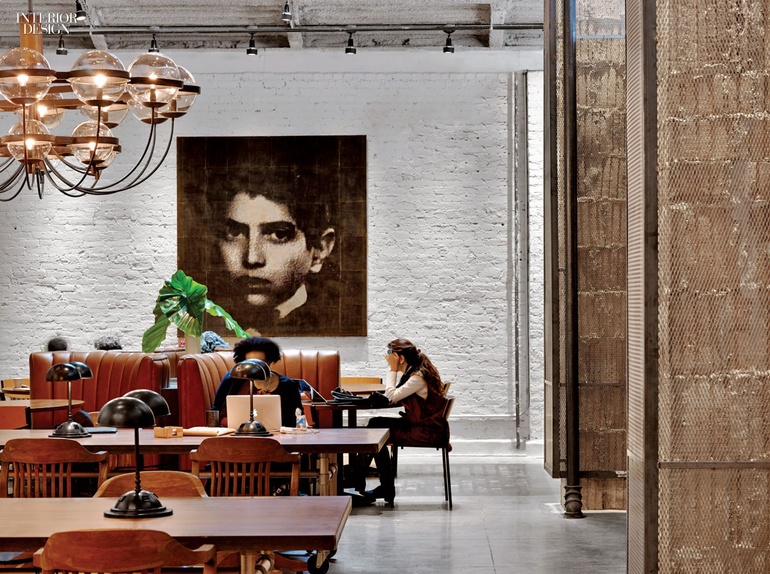 All the world’s a stage to David Rockwell, who has spent a lifetime studying how people move through spaces. The Interior Design Hall of Fame member, also a Tony Award–nominated set designer, believes that interiors should be theatrical. But that, he says, doesn’t necessitate bright lights or shiny surfaces. It means offering places to see or be seen, to be extroverted or introspective, to perform or just observe. Right now, he’s applying those ideas to some very high-profile collaborations—with the Ian Schrager Company on a Marriott Edition hotel and with Diller Scofidio + Renfro on the Culture Shed and a mixed-use tower, all in New York. There is no purer application of his principles, however, than the nearby NeueHouse, a shared office space run like a private club.

Rockwell says that he and principal Greg Keffer designed NeueHouse in a way that “privileges spontaneity and movement.” The idea is to accommodate the various ways that people work today, often with little more equipment than an iPhone. (And a credit card. Members pay between $200 and $1,500 a month to use the space.) Transforming the five-level, 35,000-square-foot facility, a former auction house, gave Keffer the opportunity to combine his expertise in office design, developed previously at Studios Architecture, with the restaurant and hotel magic that the Rockwell Group is known for.

Resemblances between the ground level at NeueHouse and the lobby of a hotel are only skin deep, however. In the hotel scenario, Rockwell says, “The first two people who sit down can dominate the room. Here, there’s always something new around the corner.” That’s due, in part, to a freestanding structure that breaks up sight lines. Taking advantage of the 18-foot ceiling, this pavilion rises on an incline that some members refer to as the Spanish Steps, a kind of all-purpose gathering place. Beneath the steps is a small café. To either side are furniture groupings, some with plush sofas and leather-edged easy chairs and others more librarylike, centered on long tables.

For furnishings, Rockwell and Keffer went with a mix of new/old, smooth/rough, and high/low. They demonstrate their flexibility when it’s time for an evening event, for example a lecture. “The lights go down, the café becomes a bar, the steps become stadium seating, and a platform by the windows is a stage. All the furniture moves around and transforms,” Keffer says. The chandeliers—of blackened steel with brass details and handblown glass globes—can be raised or lowered on pulleys for a feeling that’s more or less open. A picture rail around the entire perimeter makes it easy to swap artwork in and out as well. Many pieces hang against brick that the architects exposed along with the concrete floor, now polished to a color happily between beige and moss. Steel mesh wraps structural columns, and plywood surfaces walls. If the aesthetic seems just a bit unfinished, that’s intentional. NeueHouse is for content-creators, people who can fill in their own blanks. As Rockwell explains, “The rooms are conversation-starters.”

The three upper levels are given over to work areas that provide varying degrees of privacy or openness, from offices enclosed by steel-framed glass to double-sided workstations custom-designed to suit a variety of layouts. And each level has a pair of meeting rooms. Both have whiteboard walls, and one has a conference table. The main conference room—the one that would be the boardroom if this were the headquarters of a single corporation—is down in the basement alongside two specialized spaces created in partnership with the Sony Corporation: a video studio and a screening room with seats reclaimed from an opera house and paneling with an intentionally tactile, stringy quality. Outside the conference and screening rooms is a lounge with a counter of patinated zinc that, by day, offers tech support in the mode of Apple’s Genius Bar and, by night, becomes a bar bar offering liquid support. For anyone who’s hungry, food carts are wheeled around, an indoor equivalent of food trucks at an office park. The carts were designed in an idiom that stresses craft: earthy yet a tad glamorous, not exactly Brooklyn but not quite Upper East Side either.

Rockwell, who is a partner in the NeueHouse operation, has participated in the series of “conversation” evenings there, most recently with the boldface contemporary-classical composer Nico Muhly. (One of the membership directors worked at Soho House before joining the venture.) Cofounder Joshua Abram has praise for the atmosphere Rockwell and Keffer created. “There are people with perfectly good offices elsewhere who come here to work,” he observes. It’s not hard to see why. “Perfectly good” is one thing, but imperfectly good is even better.