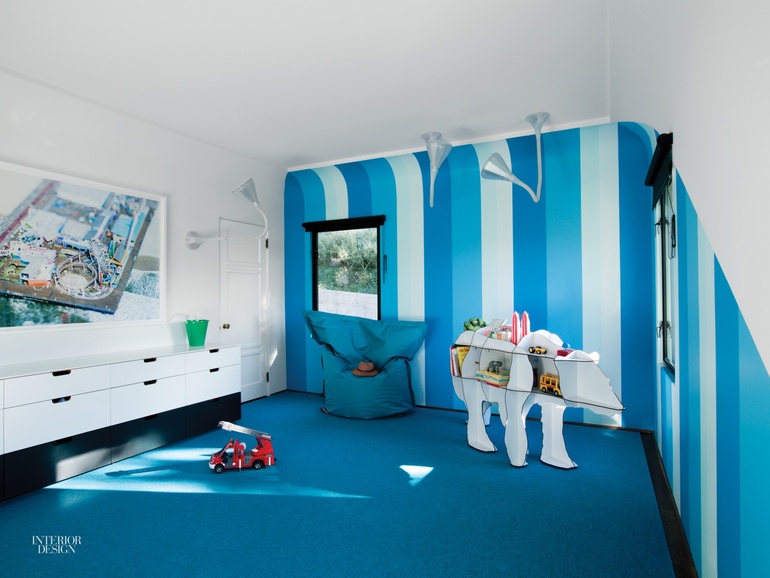 A restrained modernism characterizes the architecture of Chet Callahan. Interiors by Ghislaine Viñas, on the other hand, are exuberant and fearless, especially in her approach to color and art. So, you’re probably wondering, how did these two come to work together? On Callahan’s own Los Angeles home, to boot?

The answer is simple: family. Callahan and his investment banker husband, Jacinto Hernandez, knew they’d have one someday. They also knew that their pristine white-box dwelling was not a place for kids. No backyard, no parks, nowhere to be, well, a kid.

When the first of two adopted baby boys came into the couple’s life, they decamped. “I’d been looking for something modernist,” Callahan begins. But he settled for Spanish colonial from the 1930’s. “That style can also be austere,” he says. “And, having grown up in Southern California, I could appreciate the traditional details.”

Renovation of the 2,600-square-foot house was all about “making it fit our lifestyle,” he continues. “What to keep. What to add.” Out went the ground level’s warren of rooms. In came a kitchen, dining area, and den, all occupying a single square volume to one side of the entry hall. The sunken living room and the office where he operates his namesake firm are on the other side.

Kitchen cabinetry is a bright white to match the dining area’s previously owned table, a ribbonlike piece in solid-surfacing. The den’s Patricia Urquiola sectional faces a run of white built-ins. Thinking as an architect, he sees their top as a datum line. Thinking more practically, as a father, he knows they’re really about storage for toys and electronics.

Glass plays multiple roles, in true modernist style. In the kitchen, one section of stucco wall made way  for a glass accordion door offering instant access to a new terrace and swimming pool. Talk about kid-friendly. Upstairs, glassing in a sleeping porch gave the master bedroom its own bathroom.

One and a half years after starting, Callahan was finished. At least to a point. Plan-wise, the house worked perfectly. But it lacked soul. “I needed a designer with a skill set I hadn’t cultivated,” he admits.

Full disclosure: He began his search with Interior Design. Flipping through, he came to a dead stop at a project by Ghislaine Viñas Interior Design. At first, he was deterred by the distance—her firm is in New York. But Hernandez, a can-do type, was not. “Why not hire her?” he prodded. The cold call was made, the plane ticket booked.

“It sounded like fun,” she says of that first conversation. Intuition paid off. “I walked into the house and found the architecture immaculate. Proportions were perfect. Counters were the right thickness. I was super-excited,” she recalls. “My big idea was color blocking, to add a graphic element.”

Quarters for the boys, now 6 and 3, boast swaths of bold stripes. She painted deep-orange horizontal ones in the bedroom, then laid a rug with sunny orange chevrons. Meanwhile, the playroom is awash in aquatic verticals.

For the master bedroom, heretofore pristine white, she went with hot pink. What? Absolutely. It was love at first sight for Callahan and Hernandez. Starting by the foot of the bed, she painted a wide band  of pink from wall to ceiling. Actually, more accurately, her contractors from New York did the painting. She flew them in to ensure precision—no blurring of lines chanced in a room where an architect would be sleeping.

Runners in the hallway and down the stairs help transition to the more staid palette on the ground level. These rugs are literally and figuratively loopy, with two different pile heights and a pattern of colored outlines in lozenge shapes taken loosely from the Spanish-looking tiles on the roof. However, the background against which the colored outlines appear is a sober black.

The living room’s extra-long chesterfield and the rug underneath are a dark “raisin,” she says. “I chose it because it works with the yellow Urquiola dining chairs they already had.” Plum-colored chairs and a magenta cocktail table, all by Hayon Studio, complete the setting.

Or almost. Owning no art to speak of, Callahan and Hernandez looked to Viñas for advice. She, in turn, matched them up with a gallerist client-friend, Paige West. “Paige taught us how to collect, what to look for, and what to pay,” Callahan says.

Quick studies, the couple purchased 10 works, three from West’s own Mixed Greens and the rest from other contemporary  galleries on both coasts. Almost all are colorful, and some skew architectural. One of those, propped on the desk in the office, is a round canvas painted with precise vertical stripes. Pink, of course.