Gateway to the Gates Foundation: Visitor Center by Olson Kundig 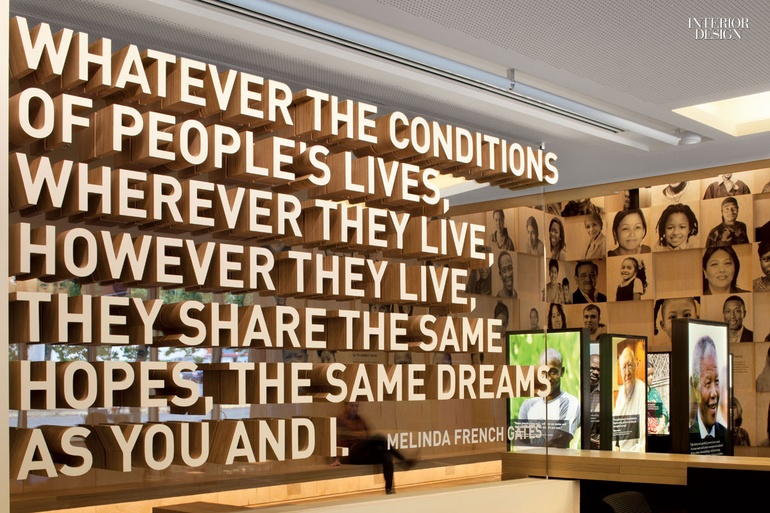 Yes, we’re all aware that Bill and Melinda Gates are major philanthropists. But how many of us truly know the extent of the Seattle-based Bill & Melinda Gates Foundation’s work and its partnership with governments, NGOs, universities, and individual grantees? That’s changing, thanks to the visitor’s center where Olson Kundig Architects has put a public face on efforts to combat HIV, malaria, poor sanitation, water scarcity, and homelessness in Africa, northern India, and China as well as, closer to home, the Pacific Northwest.

While these are clearly serious issues, it’s through play that principal and partner Alan Maskin gets the message out to visitors. They can spin a wooden globe, pull levers and pulleys, or digitally plan a foundation in this actively participatory environment. “We’re changing the model of the museum,” Maskin says.

Established in 1997, the foundation now occupies a campus by NBBJ, which completed the visitor’s center building to LEED Gold standards, including an immense green roof. Then Maskin took over for the interiors, 11,000 square feet planned with intense client collaboration encompassing a nationwide research tour. “The foundation had its own content team,” he continues. “Together, we visited places like the Centers for Disease Control and Prevention to see how they confront extraordinary challenges.”

Based on his experience with museum projects, he continues, “People feel welcome if they can see inside—before reaching the door.” So design for the Gates Foundation interior actually began street-side, with benches facing the building. Also on the exterior, projecting horizontally from a frame on the roof, are steel letters spelling out part of the Gates mission statement: “Today’s problems are solvable.” The words appears, in shadow form, on the sidewalk at noon. Over the course of an afternoon, they move upward on the building before disappearing at sunset.

As for the interior itself, flexibility and sustainability are the two keynotes. Flooring, for example, is largely concrete squares that, while hefty-looking, can be lifted for access to the mechanicals below. LEDs reduce electrical load, while a solar tracking system harvests daylight, a precious commodity in Seattle—nothing communicates the foundation’s core optimism more than sunshine. Almost as important, with so much openness, were acoustics, so recycled denim is packed above MDF ceiling slats to absorb noise. And the same priorities inform the exhibition displays, a kit of parts basically in steel with ash that’s been recycled and engineered. “We used thousands of fasteners,” Maskin explains. “They allow us to take apart the displays and reconfigure them, rather than demolishing them, as exhibits change.”

The floor plan offers flexibility, too. Along virtually the entire front of the building runs the main corridor, sloping up slightly as it goes. Openings off this long ramp offer access to the four galleries running parallel, but it’s not usually necessary to return to the corridor to change galleries. Three of the four are interconnected, with a few steps between accounting for level changes. (The only space that can’t be reached directly from the corridor is the theater.)

Each space tells a chapter of the foundation story. At the entry, floor-to-ceiling plywood letters proclaim Melinda Gates’s personal credo. Immediately after comes the three-gallery enfilade.

First is Voices, a portrait gallery that celebrates not only the foundation cochairs but also the staff and the grant partners and recipients—all images that put a human face on the foundation’s work for the world’s less fortunate. Next, the Family & Foundation gallery has several components. An interactive time line describes efforts to date,  with a portion left blank for future endeavors. Visitors can also spin an old-school wooden globe to see the foundation’s geographical reach appear, as if by magic, on a digital world map on the floor. They can even design their own foundation: They type in ideas, which are then displayed on a digital wall as a permanent part of the exhibition. Last of the gallery trio is Partnerships, where a conveyor belt rotates through the 7,000 grants made prior to the opening of the visitor’s center.

It’s from Partnerships that visitors enter the theater to sit and watch short documentaries on public health. You can glimpse them on the go as well, since the theater is open to the corridor. For formal screenings, a partition can be cranked down—a trick that Maskin borrowed from residential projects by his Interior Design Hall of Fame member boss Tom Kundig. Beyond the theater, the fourth and final gallery, Innovation & Inspiration, offers digital and analog tools for visitors to try building a model, planning a village, or writing a proposal. The resulting ideas and portraits appear on another digital wall. For those more inclined to writing by hand, a steel “postcard tree” invites contributions.

“We can’t rely on people like the Gateses to solve all our problems. Everyone must be more philanthropic,” Maskin says. “Myself included.”