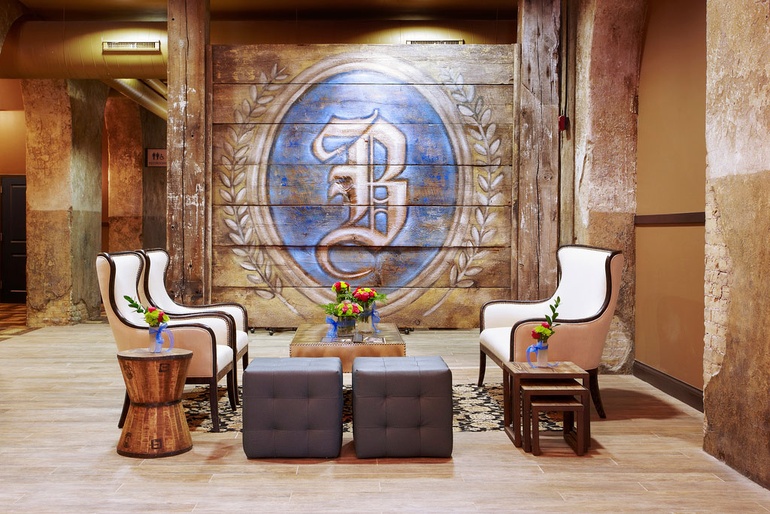 Building a hotel from the ground up allows interior designers freedom to develop a visual impact in bold and highly individualistic strokes. But what if the canvas for creating that impact were decades or even centuries old? What if it was once a department store or a church or a brewery? When innovation meets preservation, the results are one-of-a-kind. Here are seven recent hotel projects in the U.S. and around the globe where conversion created aesthetics no new build ever could.

2. Designer: Jean-Dominique Leymarie
Project: L’Iglesia Hotel, El Jadida, Morocco
Conversion: From a church
Standout: The former knave of a 19th-century Portuguese church shuttered since 1969 and located in the UNESCO World Heritage Site coastal city of El Jadida underwent a three-year restoration by owner Jean-Dominique Leymarie and his wife Marielle. The result is a vibrant and timeless design that incorporates eclectic European furnishings, rugs, mirrors and assorted household items from the 1930s to 1950s, most sourced from antique dealers in Marrakech—as was the striking lobby chandelier from Syria.

3. Designer: Landmark Restaurant Equipment & Design
Project: The Brewhouse Inn & Suites, Milwaukee
Conversion: From a late 19th century brewery
Standout: Historic preservation and creative repurposing are showcased in the Kettle Atrium, where restored brew kettles from the Pabst Blue Ribbon Brewery, which opened in 1892, are set against a backdrop of original subway tile walls and a stained-glass window of King Gambrinus, patron saint of brewers. The LEED-certified hotel has 90 light-filled guest suites with décor that melds neo-Victorian and “steampunk” style with headboards and tabletops made from salvaged floor joists, while the front desk is constructed of 1,550 amber beer bottles.

4. Designer: Gert Wingardh
Project: Miss Clara by Nobis, Stockholm
Conversion: From a school for girls
Standout: The former Atheneum school’s Art Nouveau architecture had such a distinctly feminine style that reinterpretation required respect. The designer opted for “contemporary riffs” that follow the same fluid lines of the original 1910 Hagström & Ekman design. Featuring 92 rooms and slated to open in April 2014, this Design Hotels member feels “abstract modern day Art Nouveau” with a palette of dark and light, bathroom walls of glass, and materials that are inherently Swedish: limestone, oak, bentwood, leather and parquet.

7. Designer: RPW Design
Project: InterContinental London Westminster
Conversion: From a hospital
Standout: Formerly known as Queen Anne’s Chambers, this hospital-turned-government-building-turned-hotel dates to the late 19th century and is located in the heart of London’s government district. To acknowledge this, the designers incorporated details from Westminster Abbey into the lobby’s marble and mosaic floors, while satirical artwork (such as Tom Clark’s bronze of a worker climbing a ladder) references British political life. Upstairs in the 256 rooms and suites, the theme is contemporary residential luxury, created with soothing neutrals.