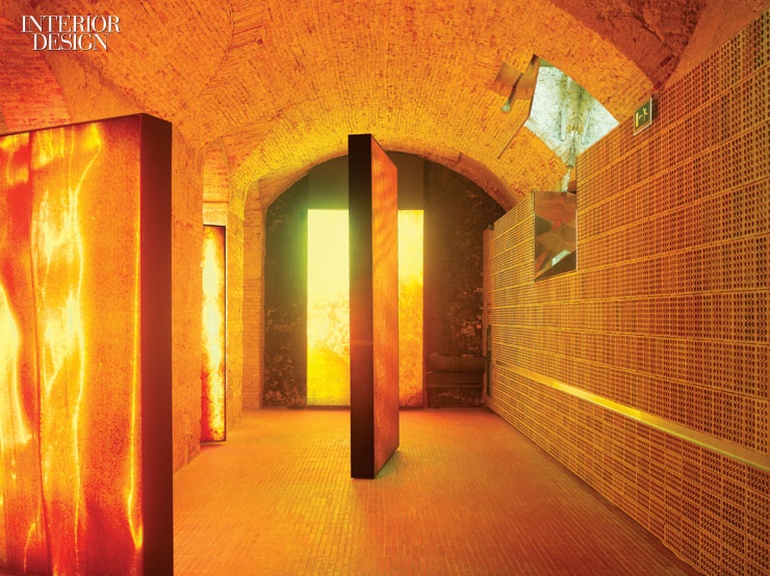 Big things are brewing again at the old Cervezas Moritz headquarters in Barcelona, Spain. Inaugurated a century and a half ago and shuttered after the death of the brand in the 1970’s, the edifice has reopened following a seven-year renovation spearheaded by the descendants of Louis Moritz, a French immigrant. Hoping to resurrect the beer for a 21st-century audience, his heirs approached Jean Nouvel, who has elevated a onetime industrial space into a temple of indulgence. The ground level offers bars for beer and wine, a brasserie, a bakery, a lifestyle boutique, and an area for private events, while the basement contains a microbrewery and a more formal restaurant. A second high-end restaurant and a boutique hotel are planned for the five upper levels.

At the start of the 44,000-square-foot project, Ateliers Jean Nouvel found that unappealing walls, floors, and ceilings from the 1970’s and 1980’s, when the disused brewery housed shops, had obscured anything original. Removing those accretions became a priority. A wealth of 19th-century detail awaited, including redbrick walls, glazed floor tiles, and huge concrete fermentation tanks, plus a secret staircase that the family had used to flee to safety during the Spanish Civil War. Nouvel preserved all the rediscovered features and integrated them. Old beer-making machinery is displayed as if in a museum. Wooden beams hover quietly overhead.

The ground level and basement, once closed-in and dark, underwent demolition to open them up and admit sunlight. Walls, ceilings, air shafts, whole courtyards—many were ripped out or sawed away. This yielded vast airy expanses, often defined by nothing more than pivoting light-box partitions. As a result, nearly all parts of the roughly triangular interior flow into one another functionally and visually. Myriad mirrors, in one case mirrored pyramids, mingle and superimpose activities from nearby, from the level above or below, or even from the street for a fun-house effect that’s a key element of Nouvel’s design.

Identical to the light boxes that serve as partitions are others suspended from the ceilings, glowing with symbolic colors. In the brasserie, they tend toward the yellow and amber evocative of lager and ale. Redder tones suggest Bordeaux or Burgundy in the wine bar, where the floorboards allude to wine barrels. Underground, in the restaurant, there’s a luxurious golden tint. Meanwhile, wall-mounted or freestanding light boxes flaunt funky images that Nouvel’s graphics team adapted from early 20th-century Moritz beer advertisements—note the pink elephant quaffing a pint.

Finishes and furniture take the lighting scheme into consideration. The clear epoxy covering floors, a patchwork of old tiles and new polished concrete, was tested in varying applications to capture the most precise illumination. (The team had to start over at one point when a cat walked across a wet floor.) Counters and tabletops in tin gently reflect and diffuse the colored glow from the light boxes. Furthermore, tin is a metal that will age visibly as a kind of homage to the bricks, tiles, stone, and other components left over from the brewery.

In the courtyard, the brewery’s fissured brick backdrops a plant wall by Patrick Blanc—who also designed the vertical gardens of Nouvel’s Musée du Quai Branly in Paris. The plant-brick combo represents a mingling of nature with industry, just like the process of making beer. Simultaneously, the plants are a living complement to the stone representations of barley and hops carved into the facade. Indeed, the project was guided overall by a desire to layer or juxtapose different eras. A clear glass wall allows the microbrewery’s H.G. Wells–worthy stainless-steel machinery, on one side, to provide a striking counterpoint to a venerable well, on the other. Now a non-operational feature of the restaurant, the well once supplied water for beer-making. The idea is revelation through contrasts, throwing each era into relief.

The microbrewery’s futuristic machines pump out unpasteurized craft beer dispensed via stainless-steel taps meticulously developed to beckon with glistening droplets of condensation. And lively Barcelona crowds throng in from 6:00 in the morning until the wee hours, every day of the week. Did the architects also consume a fair share of suds to get through the massive overhaul? You bet.