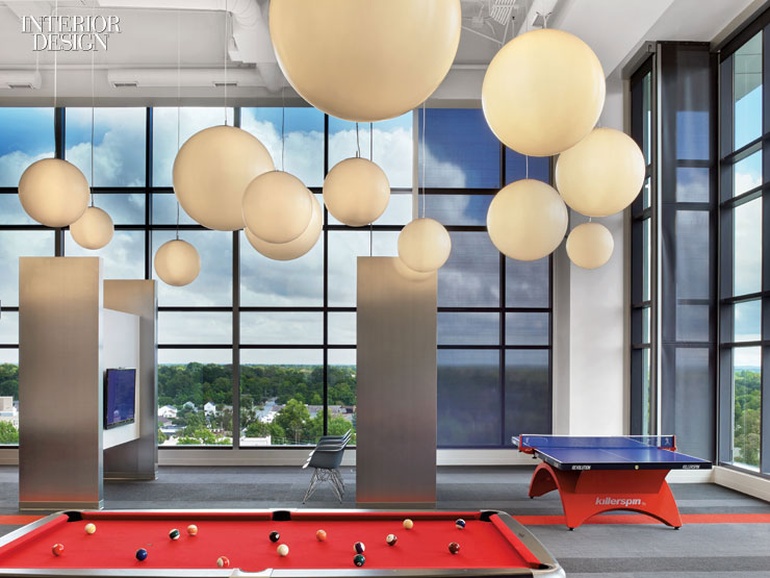 Prospective employees of Red Hat might do a double-take when they step off the elevator. The scene in the atrium surrounding the tech company’s reception desk could be straight out of Silicon Valley, with coworkers blowing off steam over a game of air hockey or ping-pong. But, as the occasional “y’all” may attest, this isn’t Northern California but the North Carolina city of Raleigh. That’s the ultimate result of a strategy evaluation during which Red Hat’s senior director of global workplace solutions, Craig Youst, asked employees to describe their ideal corporate headquarters. “We quickly realized,” Youst says, “that 30-year-olds overwhelmingly seek a high-energy, downtown type of environment.”

At the time, Red Hat’s staff of 900 had settled into the tech-focused but suburban campus of North Carolina State University. Youst was part of an executive team that stepped back to think about the company’s long-term future and even considered a move to another city. But a $15 million incentive package from state and municipal governments, coupled with the chance to take over a high-rise in a lively downtown neighborhood, persuaded Red Hat to re-commit to Raleigh even though the 19-story, 420,000-square-foot building in question—constructed for a regional energy company—required a major transformation to mesh with Red Hat’s vibe. IA Interior Architects, which was already working with Red Hat on international workplace guidelines, signed on for the challenge.

IA design principal Julio Braga and senior associate Kristen Streeter, who had both completed a Red Hat satellite office in California, hit the ground running in Raleigh. “When they were thinking about their new home, they were looking for fluidity to create connections,” Braga says. He adds, “One positive aspect of this building was that it had large floor plates.” IA took advantage of them to promote the idea of open-source—not only Red Hat’s platform for software but also an apt description of the company’s philosophy of collaboration. “They believe in open-source as a way of working and living,” he explains. “As a principle, open-source means that small ideas can come from different places and create something big.”

The buzzing epicenter is that atrium immediately encountered by visitors. To create it, IA combined levels eight, nine, and 10, a location suggested by the existing roof terrace on eight, where the building narrows by almost half. Reception shares the middle level with the main lounge, the cafeteria, and conference rooms. A gym is above. At the bottom, the employee training center overlooks the terrace. Literally and visually linking the three levels, a kind of cross-section of the Red Hat community, is a floating staircase. Floor-to-ceiling windows maximize headroom of up to 24 feet. In the words of the company’s global senior manager for workplace planning, Louise Dixon Chapman, “The space really communicates what we’re trying to achieve, transparency.”

Beyond the atrium, the massiveness of the interior gives way-finding added importance. IA worked with Red Hat’s branding department to develop a system with several layers of meaning. On a typical office level, elements underscore connections to North Carolina. “In elevator lobbies, different regional materials are applied to the feature wall,” Streeter explains. “It could be a texture, referencing the sandy dunes of the Outer Banks, or pottery, which there’s a great tradition of here.” Levels are further distinguished by accents rotating between blue, green, and orange.

Branding even extends beyond the building, thanks to the large windows that open it up to the rest of downtown. “When we started designing the corner huddle rooms, we realized they could look like a giant red stack from the outside if we painted them. That was easy execution for a grand effect, associating a whole new kind of imagery with the building,” Streeter continues. IA also worked with the branding department on rooftop signage that adds a striking streak of crimson to the city’s evolving skyline.

Down at street level, in the lobby, Red Hat has established an equally engaging presence by collaborating with a local museum, CAM Raleigh, to develop a program of art that changes semiannually. IA intervened in the lobby, too. It’s a statement piece in a youthful, energetic palette of red and white, a far cry from the previous incarnation’s paneling in corporate-traditional onyx. But rather than just toss the large slabs, IA repurposed them, a move that contributed to Red Hat’s LEED Gold certification. The onyx now clads the reception area for the boardroom, up on 18.