Mr. and Mrs. Eichler Request the Pleasure of Your Company 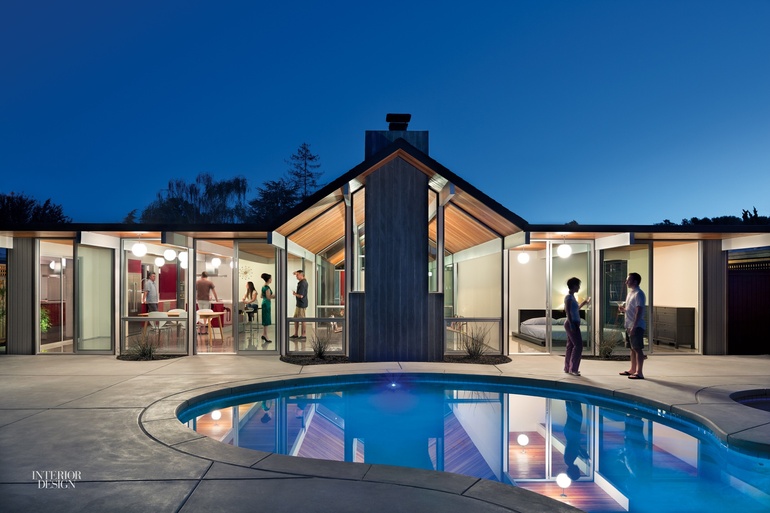 For renovations of residences by Eichler Homes, the real-estate developer known for subdivisions in postwar California, the go-to architecture firm is appropriately called. . .Modern House. So far, the firm has redone eight of these post-and-beam tract houses built for efficiency with, generally, a one-level 1,500-square-foot plan. They originally went for roughly $10,000. Now, Modern House principal Curt Cline reports, they’re highly sought-after, especially among the Silicon Valley crowd. At least one has gone for $2.6 million.

This particular Eichler residence, in the Silicon Valley city of Sunnyvale, is a real prize: designed by A. Quincy Jones’s namesake firm, which contributed multiple Eichler models between 1958 and 1966. Public and private areas, surrounding a courtyard, total an extra-generous 1,650 square feet. Out back, there’s a kidney-shape swimming pool with a hot tub. But there was work to be done. As with many Eichlers, the house had been bastardized during the ’70’s—the litany of cosmetic errors included “a ticky-tacky kitchen,” Cline reports. And that’s not all. “The Eichlers had concrete floors with radiant heating. Over the years, the concrete cracked and broke the copper pipes inside,” he explains. “The house had water damage throughout.”

Fortunately, the new owners, a couple working in technology, are devoted to what Cline calls “honest modernism.” (That wasn’t the case two decades ago, when clients—the gleam of resale in their eyes—often wanted to fancy things up, he notes.) Nevertheless, he soon realized that he would have to completely deconstruct and reconstruct. Going beyond mere repair, his goal was to fulfill some of modernism’s promises: an enhanced indoor-outdoor connection, thanks to increased glass and light, and an even more open layout.

“Once you’ve done a few Eichlers, you’re familiar with the methodology and the detailing,” Cline continues. To be safe, however, he documented the existing house with his own set of measurements and drawings prior to the arrival of the demolition crew. That would allow him to rebuild more or less according to the original plan. Current technology is a big help in updating a mid-century house both stylistically and seismically. California is earthquake country, after all. Heretofore, Eichlers had relied on their wooden facades as sheer walls. Being able to reinforce the posts with steel when rebuilding freed him up to replace some of those solid spans with glass. A few deft moves rendered the house virtually see-through—the entire rear elevation is transparent, in fact, as sliding doors better unite the patio and pool with the living and dining areas and the master bedroom. In his quest for more internal openness, the master suite and the guest room replaced three tiny bedrooms along one side of the central courtyard.

Furnishings were a joint venture, since the couple were well versed on style from the mid-century era. So well versed, in fact, that they already had three glass pendant globes from another Eichler. Equally period-correct is the living area’s setup of chairs by Le Corbusier surrounding an Isamu Noguchi–esque cocktail table. They’re anchored by a hair-on hide rug.

Cline retained original materials where possible or replaced them with close equivalents—the largest example being the ceiling’s Douglas fir strips, still 3 ½ inches wide. Elsewhere, he made changes but thoughtful ones. The fireplace and chimney in the living area were painted-over brick when he arrived. Rather than repair it, he re-faced everything in vertical planks of board-formed concrete; the central ones extend upward to meet the peak of the cathedral ceiling. The flooring is new as well. Though he did first try to patch the concrete, it ended up as, well, patchwork. So he tiled the entire slab with porcelain squares, their gray glaze a dead ringer for concrete. Outside, actual poured concrete replaces the pebbles that had surrounded the swimming pool and hot tub. For the driveway, he put in concrete punctuated by channels of river rock.

Indisputably new, the master bathroom reads boutique hotel with a floating vanity and a span of glass doors that slide open to a bamboo micro-garden. The kitchen is 100 percent 21st-century, boasting streamlined Italian cabinetry lacquered tomato red, counters in gleaming white quartz composite, and appliances in stainless steel. Cline figured that not even Eichler purists would object.