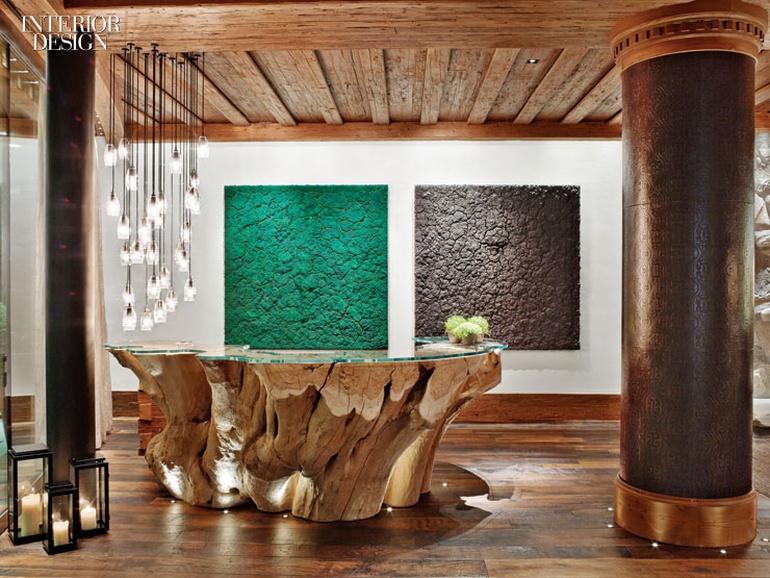 For the ultimate in swish après-ski, visit the Swiss village of Gstaad, where celebrities and European royals touch down every winter for pleasures beyond the slopes. The local luxury aesthetic, however, leans toward the rough-hewn, as restrictions mandate traditional exteriors. “You basically build a chalet or. . .a chalet,” HBA partner Nathan Hutchins jokes. Exhibit A being the Alpina Gstaad, a six-story, 56-key hotel designed by his firm and Elizabeth Wampfler, partner at Jaggi & Partner.

“As much as possible, she and I used natural materials,” Hutchins says. Weathered timber, largely reclaimed from barns, sheathes walls and ceilings. Embossed cowhides got pieced together to wrap the lounge and lobby’s round structural columns. River stones became fireplace surrounds. Craggy split-face stone clads the elevator core.

Humor plays a part as well, via artwork, some commissioned. In the all-day restaurant, a wall-hung sculpture shaped like goat horns is composed of horn-handled knives and forks. In  the cigar room, there’s a black-and-white acrylic on canvas of a smoking gorilla. The hotel owners, Marcel Bach and Nachson Mimran, were responsible for finding the creator of that piece and for stipulating that the room’s mahogany paneling be patterned after Bach’s favored salón in Havana. (A woodworker went there for seven days to study the finishes.)

The owners also contributed the lounge’s salvaged trompe l’oeil ceiling, which probably came from a church. Painted on wooden planks, the ceiling arrived in three pieces and was installed using joists and hangers. Another logistical adventure involved the duplex suite. An oversize headboard had to be lowered by helicopter onto a balcony and guided inside, thanks to the double doors.

Even more enormous was the tree root that Wampfler grabbed for use as the reception desk after a farmer happened to mention spotting a fallen ash a few valleys over. At several tons and 10 feet in diameter, the root was far too heavy and cumbersome to move around the reception area, so the architects substituted cardboard cutouts to finalize the positioning. The desk now sits beneath a cascading chandelier, its glass shades etched with snatches of Swiss poetry.