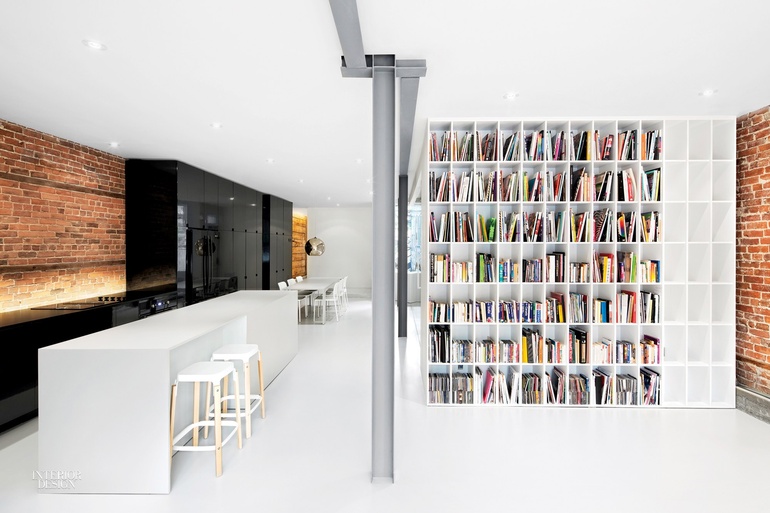 It’s universal. You walk through your front door...and head straight for the kitchen. At this Montreal apartment, the owners, a graphic designer and a pharmacist, don’t have far to go. The open kitchen is just steps from the entry, straight ahead, as befits the star attraction. Thank Anne Sophie Goneau for that—she could have placed the kitchen practically anywhere she liked after gutting the 1,300 square feet, the ground level of an 1887 triplex.

One sidewall anchors the black swath of glossy plastic laminate that unifies and accommodates the kitchen’s cabinetry, sink, and appliances. For the cooktop, Goneau chose integrated ventilation. “There’s no hood, since I was going for maximum exposure of the brick wall,” she explains. Parallel to this major built-in sit the kitchen island and the dining table. Avoiding the “big block” look for the island, she says, she gave it the same slim shape as the table. She also had both match the matte gray epoxy flooring, radiant-heated throughout.

Where the kitchen built-in and the dining area terminate, the floor plate narrows to just half the width of the front section, and the hemlock boards take over from the exposed brick on the wall of the corridor past the guest room, to the bathroom. No shower curtain in sight here. The mood turns positively steamy with a shower and a toilet fronted solely by glass.