The Story of Stone: Stone Source Showroom by Gensler 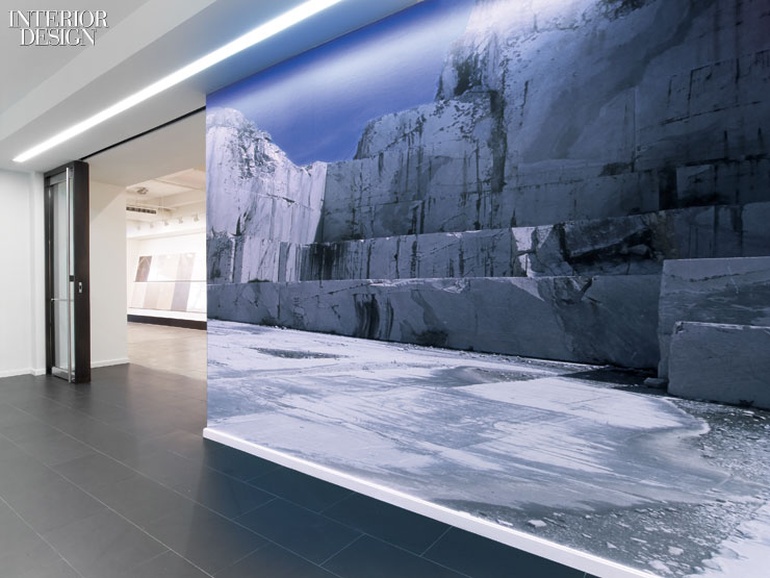 It’s a long way from quarry to job site, a journey that’s sometimes forgotten in a gleaming kitchen or a glamorous hotel bathroom. So Stone Source is offering a reminder at a trio of Gensler-renovated showrooms. Washington and Los Angeles came first. Now there’s the largest, in New York.

The showrooms aim to change the way Stone Source clients learn about its products, reflecting a shift in designers’ relationship to natural resources. In New York, the first indication of the new narrative is the photomural of a quarry that appears in the elevator lobby. Farther in, images shot in other quarries loop on flat-screen monitors.

One of the most revealing changes, literally, was to expose the windows, which had always been covered. Product samples mounted below can now be viewed in natural  light. And the entire interior benefits from the textural context provided by the facades of surrounding buildings.

Yes, a certain amount of?wall surface disappeared when the windows re-appeared. “The project was about minimizing display and maximizing product,” Gensler design director Ed Wood says. Samples are approached in a more interactive way. Instead of being glued to a wall, stone slabs or tiled panels might lean against it. Drawers open and close.

Functionality also increased for staffers. Whereas sales-people once disappeared into the nether reaches to find a sample, today they accompany clients into open bays. In addition, much-needed office space was gained when an adjacent tenant left. A little more than half of the current square footage, 15,700, is given over to low benching workstations flanked by  meeting and multipurpose rooms. The latter have even been used for employee and client yoga classes after-hours.

Not all is smooth and sleek. In fact, the rough edges may be?the project’s most alluring aspect. Surely no one will bypass the rugged profile of the Calacatta marble block that anchors one end of the reception desk. Another lesson that natural materials are imperfect, perfectly.