Out of the Office: Ippolito Fleitz Group Renovates Drees & Sommer 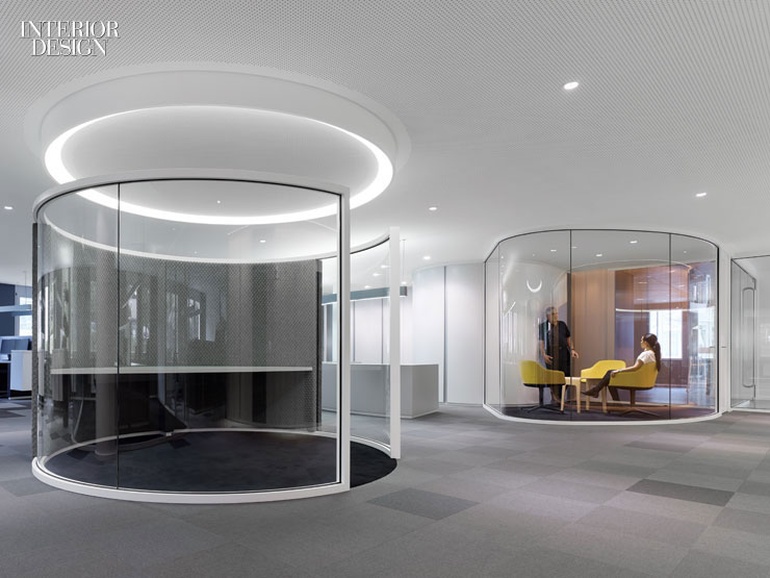 Personal space at Drees & Sommer, a Stuttgart real-estate project-management company, used to be defined by stacks of paper in varying heights, forming irregular boundaries in the office area. It?had been a classic desk-oriented environment ever since Hans Sommer completed the building in 1992. A decade later, those desks started to empty, and the proliferation of portable devices in recent years only accelerated the exodus. The catalyst for hiring Ippolito Fleitz Group for an overhaul, Gunter Fleitz says, was “the realization that the average time someone is actually in the office is only one and a half days a week.” Peter Ippolito adds, “With the exception of the assistants, most staff is working with the client at?the building site.” The contradiction was clear. With so much space monopolized by employees who were absent, there wasn’t enough left to allow the company to expand. “We’re facing this problem all over Germany,” Ippolito says. “Buildings, now 20 or 30 years old, needing to be renovated.”

The new internal organization is sensitive to the building, an unusual three-story structure with two asymmetrically curved wings pinwheeling off a round glass atrium. “It was important to Hans that we respect his architecture,” Ippolito says. A bonus to this approach: cost-effectiveness. Transparency drove the layout of the workstations on the two office levels, totaling 20,000 square feet. (Ippolito and Fleitz didn’t touch the conference center above.)

Critical to the success of the concept, both teams agreed, would be a touch-down approach. “All the employees, including management, lost their assigned offices and desks,” Ippolito says. “Now they come in and look for a spot that’s best suited for what they have to do that day. It’s a change in the whole way of working.” The results were immediate. Drees & Sommer was able to add 30 employees, bringing the total to 130, and still has room to grow. What’s more, Ippolito continues, “It’s become a showcase for potential clients.”

Plasterboard walls gave way to glass between the wings and the?atrium, allowing more of the latter’s sunlight to reach the long, curved white desks where the assistants work—they’re the ones always here, after all. Glass also fronts the perimeter offices and encloses the podlike team rooms, containing four workstations apiece, and meeting rooms. The private telephone pods, perfectly round, recall a Star Trek transport capsule, thanks in part to the LED halos in the ceiling. “We followed the building’s curves to create beautiful layerings,” Ippolito says.

Although transparency was paramount, acoustics were almost as important. A telephone pod’s glass enclosure is supplemented by an arc of slate-gray fabric-covered wood to both contain sound and keep it out. Carpet tile in an array of grays absorbs noise while assisting with way-finding. Height-adjustable panels separate the workstations. Overhead, Ippolito and Fleitz dropped the ceiling to conceal HVAC systems, then surfaced it with micro-perforated plastic laminate to dampen din.

Lively conversation is encouraged, however, in the Marketplace, which incorporates the café and lounge. With staffers out of the office so often, communication was a major concern, Fleitz explains: “When they come back to their base, it’s important for them to have a place to be able to discuss what they were doing, what they experienced.” A slatted oak ceiling and planklike vinyl flooring define the space overall. At the lounge end, Jasper Morrison sofas are positioned for comfy conversation or for teleconferencing on the flat-screen monitor. In the café, a medley of Tom Dixon lanterns illuminates a row of booths, as white shell chairs line a long lime-green table.

Speaking of procedure, a company-wide effort to go paper-free has drastically slashed storage needs. Before, there was an average of 30 linear feet of filing space per employee. That’s been reduced to less than 3 feet. Stacks of paper no longer define prime real estate.