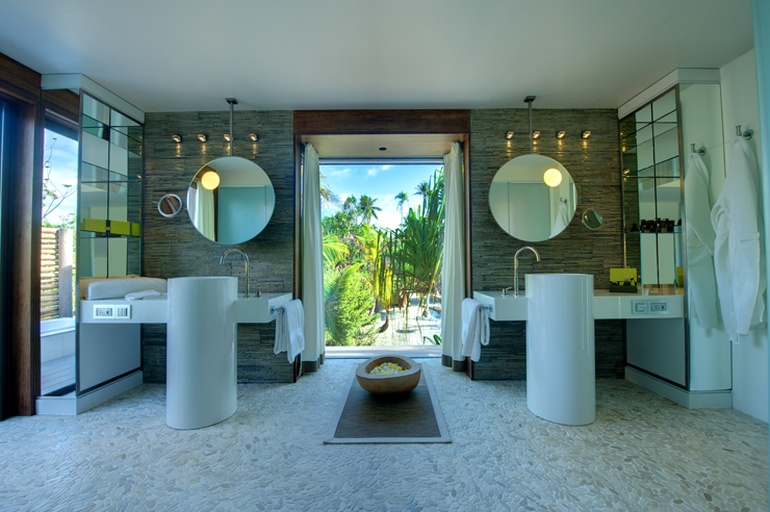 It has been almost a decade since actor Marlon Brando died, leaving his vision of turning Tetiaroa—his private atoll in French Polynesia comprised of 12 islets set on a stunning blue lagoon—into a luxury eco-resort to his friend hotelier and businessman Richard Bailey. That vision is now a reality at The Brando hotel by ID Associés Architecture Intérieure and Pierre-Jean Picarte Architectes. The 35-villa property, bearing the late screen legend’s name and Bailey’s expertise as an eco-resort pioneer, will begin welcoming guests next July. What they experience when they arrive will be the world’s first Net Zero Energy Use—meaning all energy consumed is generated via renewable sources such as solar, coconut oil biofuel and seawater air-conditioning (SWAC)—luxury resort on a private island.

“Brando was a man ahead of his time,” says Bailey. “He had heard of the SWAC principle (piping naturally chilled sea water to land and converting it to air conditioning) as early as the 1970s and he dreamed of making it a reality on Tetiaroa for aquaculture.” Bailey, president and CEO of Pacific Beachcomber, ran with the idea and successfully implemented it at his InterContinental Bora Bora Resort & Thalasso Spa in 2006. Now the systems are in place, including the photovoltaic cells along Tetiaroa’s airfield, that will provide half the resort’s energy needs and all of its hot water, and the finishing touches are being made on the one-bedroom beachfront villas.

To achieve LEED Platinum certification, Bailey notes, all building materials used at The Brando are of local or certified origin, are renewable or incorporate recycled components. And because Brando did not want French Polynesia’s ubiquitous overwater bungalows on Tetiaroa, Bailey respected his wishes and built villas designed to blend into the environment. “The value of the product proposal resides in the setting, the environment, the island of Tetiaroa—with its breathtaking and pristine beauty,” he says of the resort’s design. “Without being minimalist, the choices were made in keeping with what can be called ‘responsible luxury,’ which is part of The Brando’s DNA.” For example, the design team used aito (ironwood) trees, an invasive species brought here by man, in the villas’ design, the spa is set amid serene water lilies and features holistic treatments inspired by ancient Polynesian traditions, and the SWAC system is set to break new records in terms of renewable energy.

“At The Brando, luxury is unplugged,” says Bailey. “It is a place where indulgence lives hand in hand with respect for the environment.”