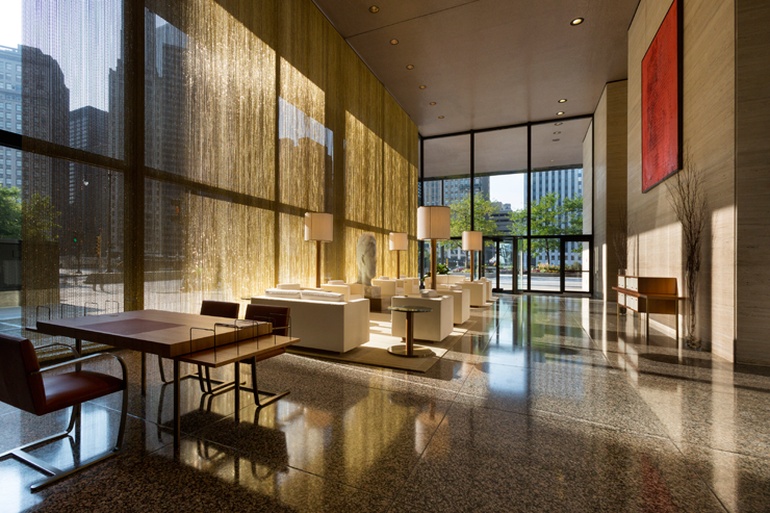 When you are developing the first hotel inside the last Mies van der Rohe-designed office building—the 52-story former IBM building on Chicago’s Wabash Avenue, completed in 1971 (two years after his death) and the youngest building in the city to attain landmark status—there needs to be a high level of respect for the original vision. Celebrated as a pioneer of the “curtain wall,” Mies designed skyscrapers in what he called “skin and bones” architecture, steel-and-glass structures intended to capture the essence of the mid-century modern era.

Enter The Langham Chicago, which partnered with Mies’ grandson, architect Dirk Lohan, to transform the first-floor from an office-building lobby to a luxury hotel lobby, all while retaining his grandfather’s visually fluid aesthetic created by 20-foot floor-to-ceiling windows. Lohan strived to honor this legacy by keeping the design simple and by incorporating a sofa Mies designed for his daughter (which had never before produced for the public) into two custom furniture groupings set atop expansive Lapchi rugs.

London-based Richmond International was responsible for the bulk of the design on floors 2-13, where the hotel is housed, from the expansive guest lobby with its hand-blown glass overhead “pebbles” from the Czech Republic to the “soft modernity” of the 316 rooms and suites where bathrooms feature light-colored travertine inspired by the original lobby. “We wanted to create an environment that was tied to the mid-century modern world, but not a Mies museum,” says Richmond interior designer Fiona Thompsen.

Using a simple palette of materials taken from the original architecture, including travertine and bronze, the design team added rich walnut and rosewood in homage to other Mies-designed buildings. The one-bedroom suites also feature a Mies-inspired chaise. Artwork is a key element in the hotel, too. Public pieces are by such notables as Claus Oldenberg, Anish Kapoor and Jaume Plensa, and tie back to Mies’ relationship with the Bauhaus. Mies also was the first architect to use thermal glass, what has come to be known as Thermopane, and thus the building is LEED Gold-certified. “The refurbished large windows open up the city to the interiors, extending the architecture of the building and flooding the space with light,” says Thompsen. “[This] creates a wellness experienced by all who pass through the space.”