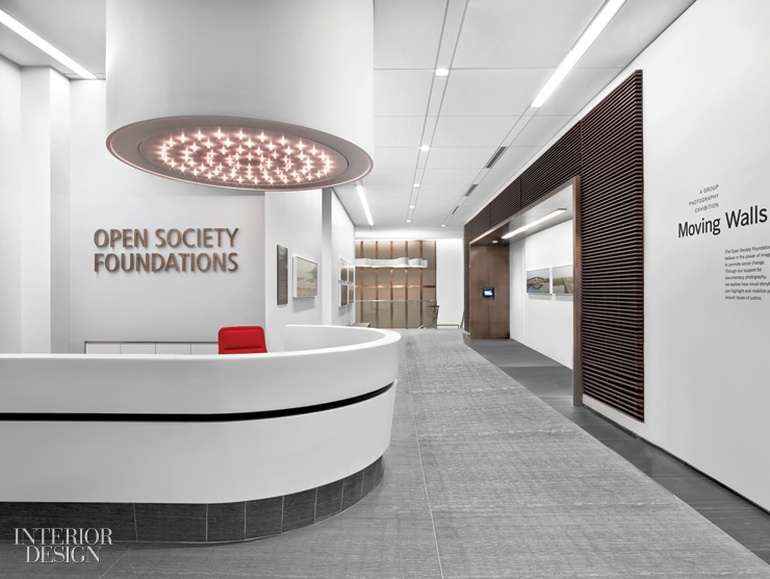 Soon after architects Asifa Tirmizi and Scot Campbell established Tirmizi Campbell, Campbell’s former employer “tossed” them a small kitchen renovation. The client was Stewart Paperin, executive vice president of the Open Society Foundations, financier George Soros’s network of philanthropies promoting global democracy and human rights, and that kitchen project led to jobs for the organization. When it planned to consolidate its two offices by taking over a 1909 landmarked building in Midtown, Tirmizi and Campbell were asked to compete for the commission—far bigger than anything they’d ever done.

Even with Paperin recusing himself, they won. Campbell’s ex-boss may have thought he was throwing them a small fish. But, as Tirmizi says, “It turned out to be a whale.” To help handle a project of that magnitude, HLW International came on in an advisory role, which included acting as architect of record and lighting consultant.

The nine-story terra-cotta exterior could not be altered, but the 163,000-square-foot interior underwent a complete overhaul. Given the Open Society name and mission, the?organization needed headquarters that felt welcoming but not extravagant. “We do a lot by consensus,” Paperin says. So the 400-plus employees got to pick their own furniture from a range of options—looking, touching, and voting on the spot.

Employees also voted for one of five way-finding colors for the eight office levels. “There is nothing worse than being in the elevator, and the door opens, and you don’t know what floor you’re on, because they look the same,” Campbell says. Four colors—red, blue, aqua, and straw yellow—got picked, which was the goal.

Layouts took a lot of negotiation, since Paperin favored a collaboration-friendly open plan, while other executives preferred traditional enclosed offices. The hybrid solution was private offices for some and unusually generous 6-by-8-foot workstations for others. The building’s steel columns were left exposed, freeing up square footage and creating a less corporate aesthetic.

Tirmizi Campbell really got to show its stuff at the top and bottom of the building. On the roof, a shedlike office made way for a cafeteria surrounded by planted, furnished terraces. The ground level and the basement became a conference center, thanks to 4 feet of excavation and a new  floating staircase. Anterooms serve as galleries to display documentary photographs of the countries where the Open Society Foundations operate—a constant reminder of the work being done.