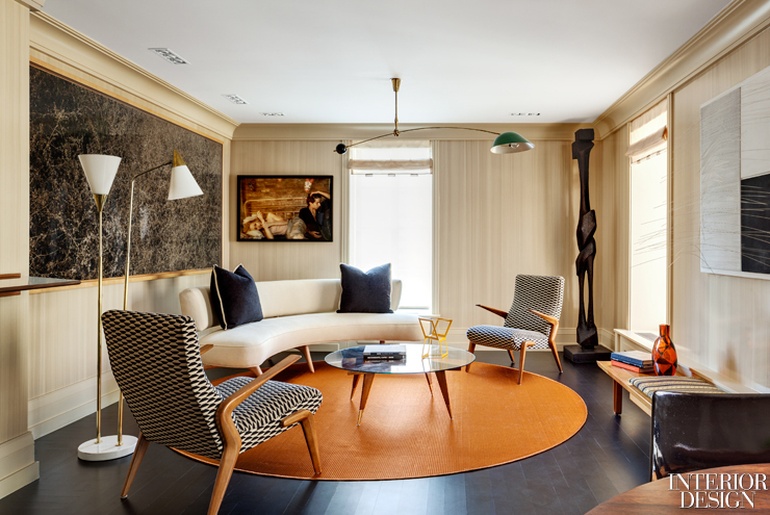 Dating a Venezuelan-born fashion designer, Angel Sanchez, was what introduced Christopher Coleman to South Florida’s Latin community. Before long, Christopher Coleman Interior Design was completing five projects a year in Fort Lauderdale and greater Miami, where the voluble redhead met a young Venezuelan couple looking to renovate a pied-à-terre on New York’s Upper East Side. The apartment was in a neo-Gothic tower that started life as the Barbizon Hotel for Women, temporary home to Grace Kelly and Liza Minnelli, before passing through various iterations culminating with a luxury condo conversion. Today, Coleman says, “It’s a building that caters to South Americans and Italians.”

Two bedroom suites take up most of the 2,250 square feet in the couple’s apartment, leaving a relatively modest living room. But by swapping an out-swinging kitchen door for a pocket door, Coleman was able to squeeze in a round dining table and six chairs newly acquired by the couple, who have amassed quite a collection of mid-century furniture at auction.

Their pair of Italian 1950’s armchairs now sit in the living area. Coleman gave them op-art upholstery, then picked Vladimir Kagan’s snappy Floating Curve sofa to coordinate. To anchor the seating group, he placed a round rug, braided from copper wire, on the dark-stained walnut floorboards.

It took some persuading to get the couple to agree that the living-dining room did not have to be painted white or beige. “The most important thing for them is their art,” Coleman explains. So he pushed for wallpaper hand-lacquered in a camel strié pattern just subtle enough to satisfy a collector.

Gio Ponti inspired the powder room’s feature wall of black, gray, and white ceramic tiles. “Everybody from Ven­ezuela loves Ponti, because he designed a famous house there,” Coleman says. (It’s a 1956 villa in Caracas.)

Even more expressive is the guest room’s Dick Tracy–yellow wall covering patterned with oversize slashes—it’s a dynamic backdrop for bunk beds built with steel pipe. Though the beds are a Coleman signature, he didn’t expect to be installing them here. “The funny thing,” he says, “is that the clients don’t have kids yet.”