Taking It To The Street: ARO Gives Knoll a Midtown HQ 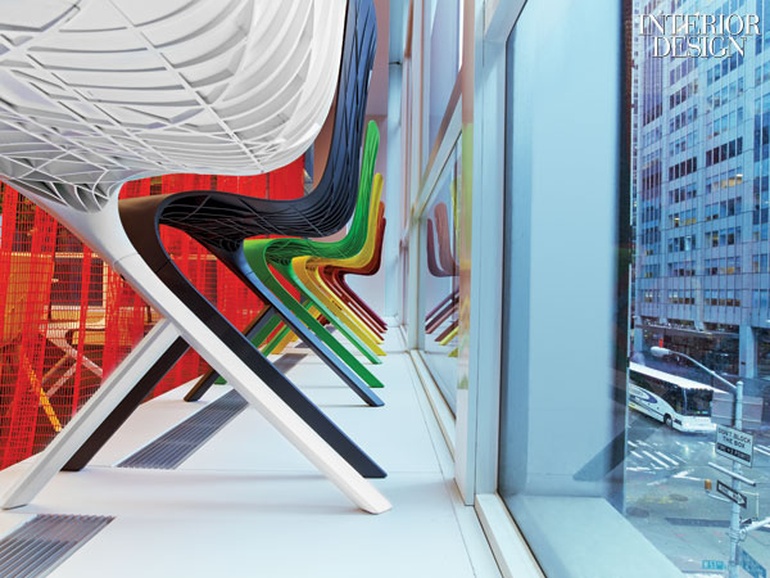 There were already plenty of Knoll products on display on West 53rd Street—at the Museum of Modern Art, where chairs such as Ludwig Mies van der Rohe’s Barcelona, Eero Saarinen’s Tulip, and Frank Gehry’s Power Play are in the permanent collection. But the range of furniture icons to be seen on that particular Midtown block just got a whole lot bigger, now that Knoll has moved to a tower around the corner from MoMA.

A home design shop, the first in?the company’s 75-year history, occupies part of the ground level. Directly above are the showroom and the headquarters, together occupying three full levels that seem suspended over the avenue. “You can practically hail a cab when you stand in one of the corners,” Knoll executive vice president and director of design Benjamin Pardo says. Seen from the outside, the four-level, 42,000-square-foot ensemble is a block-long advertisement—courtesy of Architecture Research Office, which draped all the windows with open-weave fabric in the “Knoll red” that Massimo Vignelli chose and named for the company in 1967.

A firm known for its pioneering approach to materials, ARO was hired to use Knoll products, including those of divisions FilzFelt and Spinneybeck, in ways that would ignite customer imagination. Principals Kim Yao and Stephen Cassell linked the showroom and office levels with narrow steel staircases, then wrapped the lower one in FilzFelt’s red wool felt and the upper one in Spinneybeck’s brown leather. “It’s the best-smelling stair in the world,” Cassell says. Pardo adds, “During meetings, we would fight over who got to hold the leather samples.”

At the previous headquarters, Knoll had showed its products against an industrial backdrop. But not every customer is working on a project with an adaptive-reuse vibe, the company’s senior vice president for communications, David Bright, points out. So the Midtown location offers a range of environments, from the conventionally corporate, built out with plasterboard, to rawer spaces, with beams and pipes exposed. To maintain continuity through the variety of settings, ARO repeated some materials, such as dark-stained end-grain oak for flooring, on all levels.

The second level clearly announces itself as a showroom starting in the elevator lobby, where supergraphics, light boxes, and illuminated niches display Knoll images, documents, and objects in a time line from 1938 to 2013. (Always exacting, ARO made sure that the lobby’s black granite floor and clear glass doors would reflect the time line as cleanly as possible.) Inside the showroom, furniture groups are kept low in order not to sacrifice the openness. Some sections are almost residential in character, with wool felt rugs and silk wall panels demonstrating how to create a “homey” office. Thick metal rails form structures for hanging fabric—a reference, Cassell says, to a 1960’s showroom designed by Florence Knoll herself.

Knoll’s sales, marketing, and communications teams are on the third level, which takes the form of an open-plan office based around the Workspaces flexible benching system by Antenna Design. For meetings and conference calls, ARO added small “touchdown” rooms. Some are lined, for both acoustical and aesthetic purposes, with corrugated felt that looks like oversize corduroy.

The top level is the most formal, its avenue frontage lined with executives’ offices. Each is different, partly because these ostensibly private spaces are meant to be seen by clients—well-designed offices are Knoll’s best advertisement. And that philosophy applies most of all to CEO Andrew Cogan’s spectacular corner office. Among its furniture from a collection by Rem Koolhaas’s Office for Metropolitan Architecture is the 04 Counter, a cantilevered bench and storage unit that’s surely one of the company’s most extravagant recent offerings.

From Cogan’s desk, properly known as the 05 Round Table, he can see Black Rock, the dark granite-clad 1965 skyscraper by Eero Saarinen and Associates. Saarinen was of course one of Knoll’s most prolific collaborators, and it was Florence Knoll who designed the interiors at Black Rock for its longtime occupant, CBS. If Cogan is looking for reminders of Knoll’s past, all he has to do is glance across the street. For the present and future, his side of the street will do.