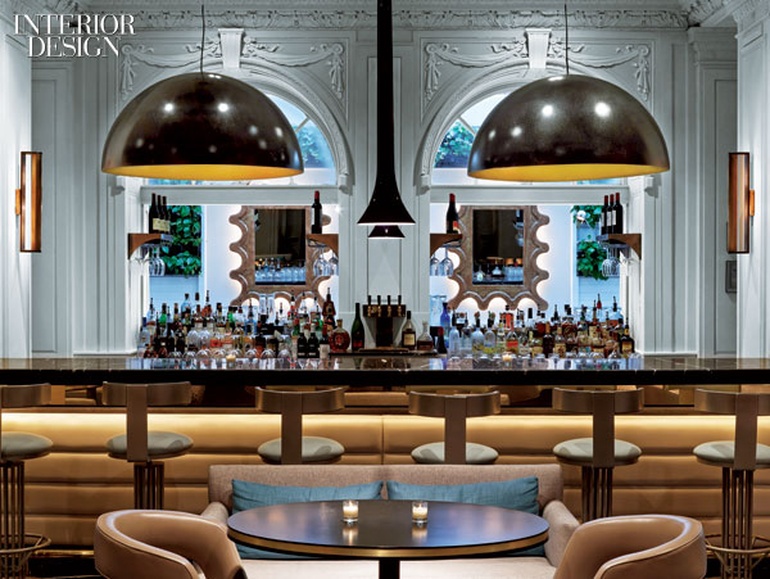 Harlow has a glamorous pedigree. In 1926, William Randolph Hearst built the Lombardy Hotel in Midtown and began using its rear dining room as a personal entertaining space. His paramour of many years, the actress Marion Davies, presided as his hostess there. Many would have said that she was better in that role than the ones she played on-screen.

After Hearst’s demise, the private rooms—their elaborate moldings, bas-reliefs, paneling, leaded glass, and crystal chandeliers intact—first became a restaurant, later morphing into an unlovable conference facility and ballroom. But Richie Notar, who got into the hospitality business wrangling celebrities at Studio 54, envisioned a dapper new social hub there. “A parlor and café,” he calls it. And he knew that the perfect firm to see a $3 million-plus renovation through was hip young Meyer Davis Studio, which had previously designed a Southampton restaurant for the Nobu chain, where Notar was then a managing partner.

The L-shape 7,000-square-foot Lombardy space is “the kind of jewel you dream about,” Will Meyer says. “The great thing is that nobody had messed up the original architecture, so all we had to do was bring it back.” Waitstaff is getting ready for a weekday lunch, as Gray Davis adds, “We tried to infuse it with the right cool touches but keep the links to the past.”

Those links at Harlow—named after the 1930’s screen goddess Jean Harlow to evoke its old Hollywood origins—include the bar-lounge’s original paneling, now painted a gentle but eye-catching shade of blue, and an over-door clock flanked by bas-relief rampant hounds painted a deep taupe to show them off in contrast. Oak paneling wraps the main dining room, its leaded-glass windows backlit to produce an amber glow. Dozens of Empire-style chandeliers were restored. “We had to clean and polish every single crystal by hand,” Meyer says, going on to point out new touches in the lounge that contribute to the festive vibe.

Black Venetian glass pendant fixtures flare trumpetlike over ebonized tabletops with brass edges. Oversize black pendant domes float above the?bar, which has a counter in black marble and a front upholstered in pearl-white faux shagreen. Bar stools are deco-style. Over the fireplace mantel hangs a mirror emblazoned with a quotation from Henry David Thoreau: “It’s not what you look at?that matters, it’s what you see.” Davis describes what you see at Harlow as “a mix of old and new, elegant and eclectic.”

Architectural details are virtually nonexistent in the dining annex behind the lounge, however this narrow sliver has a conservatory roof that provides Harlow’s only natural light. Meyer and Davis took advantage of that by installing a plant wall as an earthy counterpoint to the high-style gloss of Warren Platner–inspired dining chairs upholstered in eggplant velvet, mirrors with amoeba-shape frames, and floor tile in a pattern of M.C. Escher–esque optical-illusion cubes. All in all, it’s a bright yet soothing spot for lunchtime under the towers of Midtown.

At night, Harlow is becoming a destination for high-profile parties. One for Madonna had her entourage pushing aside tables and breaking into a hard-core dance-off. A bash for the premiere of Woody Allen’s Blue Jasmine left the place in need of some reordering. “I’m sorry about the destruction,” a manager says to Meyer as he surveys disarrayed furniture from the vantage point of the dining room’s imposing white raw bar.

It’s backed by antiqued mirror painted with schools of fish. Oyster-shape chrome bar lamps and top-hat chrome champagne buckets add a retro touch, as do steel-blue velvet-upholstered U-shape banquettes. Internally lit seating dividers’ tops glow bright white. Concealed at the top of the paneling, up-lights are as soft and discreet as the sound system is not. “Sick,” Meyer comments.

The whole gestalt of the place is a?mix of historic and kick-up-your-heels festive. That’s evident in the bright red shoes of the Andy Warhol silk screen in the entry, opposite a tufted banquette for phone conversations, and the black-and-white circus-tent striped paint in the long gallery leading back to the action. “The stripes let you know you’re getting into something fun,” Meyer says.

He might say the same of the ladies’ room, with its abstracted rose-petal wall covering, Hollywood Regency mirrors, and acrylic makeup tables. In the men’s room, meanwhile, charcoal-gray wall covering printed with wispy curls of cigarette smoke seems to mock a No Smoking sign by the door. “It’s a little naughty,” Gray says. But, as glamour shots of a cigarette-wielding Jean Harlow attest, some like it smoky.