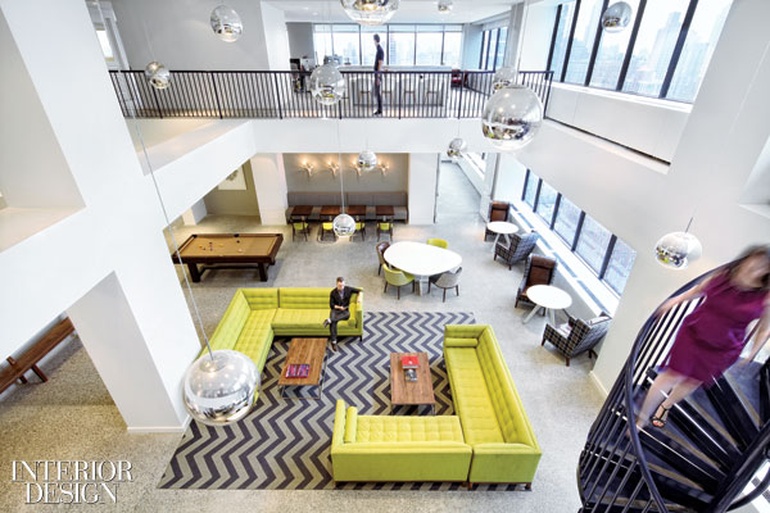 Constant buyouts, spin-offs, and mergers give a certain dynamism to advertising agencies—making them fertile ground for workplace reinvention. And it was high time for McCann Erickson to redesign its Midtown headquarters, home to 600 employees in both local and worldwide divisions. “Diplomatically put, the bank branch across the street had become more exciting,” McCann chief creative officer for global brands Linus Karlsson says. “Perhaps once right for a different era, the old space no longer represented who we are. It was designed for people to disappear into.” There was a distinct lack of places for casual interaction, and the best views were reserved for senior staff in corner offices.

The twofold task of charging forward while preserving the agency’s 83-year-old gravitas ultimately fell to two different yet complementary firms, Gensler and Tom Dixon’s interiors-focused Design Research Studio. While Gensler, led on this project by principal and design director Brian Berry, has virtually limitless corporate experience, McCann would be Dixon’s first office project as well as his first interior in the U.S. Of the five levels, totaling 130,000 square feet, the topmost one went to Dixon to transform for the worldwide executive team, while Gensler handled the four below, often pulling from Dixon’s catalog of furniture and lighting.

“A lot of people were hiding in their cubicles, never communicating amongst themselves,” Dixon recalls. “It was hard to find your way around, because it was so compartmentalized.” Now, corners are reserved for break-out areas and meeting rooms, allowing the newly liberated views to every side to create a passive form of way-finding. Traditionally hierarchical offices were jettisoned for benching workstations, plus plenty of meeting and telephone rooms in a variety of sizes. “The idea,” Berry states, “was super-flexibility.”

“In the ad world, employees might come in at 10:00 in the morning and leave at 10:00 at night. There’s a rhythm to creative work that’s not nine-to-five,” Berry continues, explaining why Gensler provided a selection of color palettes and moods that essentially go from darkest at the top to brightest at the bottom—a something-for-everyone way of working. “Even though you’ve been assigned a?desk on a certain floor, you can bring clients to a location that fits your personality.” Black and gray dominate the main reception area and the adjacent café. Two levels below, a pinup area is bright white accented with young, fresh lime. That level and the very bottom one are connected via the residential-style spiral staircase in the double-height main lounge, where sunny yellow Jonathan Adler sectionals and a zigzag rug lend the feeling of a living room.

The other double-height space is main reception, which resembles a hip hotel lobby with seating that’s tailored yet informal. “It’s a hospitality-meets-workplace environment,” Berry says. “Especially in New York, the hotel lobbies that people want to hang out in have little nods to a faux-historical world.” Instead of the main lounge’s spiral staircase, a much grander flight of stairs ascends straight to Dixon’s executive realm.

It’s entirely in keeping with his quasi-retro products in “honest” marble, brass, and hardwood as well as with his past interiors for such private clubs as London’s Shoreditch House. “Ten or so years back, people thought everyone would be working from home by now, that there would be flight from the cities, that people would be decentralized,” he says. “But almost the opposite has happened. People very much want to commune, despite the fact that they can communicate efficiently 24 hours a day. What I noticed with the private clubs was that people were joining not to go there at night but actually to work there during the day, to take a chance meeting over good coffee.”

In contrast to the Gensler-designed levels at McCann, Dixon assigned each department its own zone. His own curvy sofa, a table by Charles and Ray Eames, Moroccan vintage rugs, and generous rosewood veneer explain why the corner occupied by human resources is dubbed the Apartment. “It’s more of a communication space than an office—people work in a face-to-face way,” Dixon says. Low furniture and cabinets and glass-enclosed meeting rooms maintain the visibility. Meanwhile, the massive blue foam seating system of a break-out area nicknamed Central Park is set apart by dividers covered in live plants. “It was about getting away from your desk and having an unconventional sitting area with a bit of greenery,” he continues. “It’s adjacent to the finance department, which we felt particularly needed to enjoy a less formal environment and put their feet up on a large and complicated sofa.”

As reported by one of the New York office’s chief creative officers, Thomas Murphy, “Transitioning to an open space can be quite a shock, but we immediately saw the enthusiasm and pride.” That was evidenced, the very first week, by all the staffers running around Instagram-ing every conceivable angle.