On Top of TriBeCa: Penthouse by Steve E. Blatz 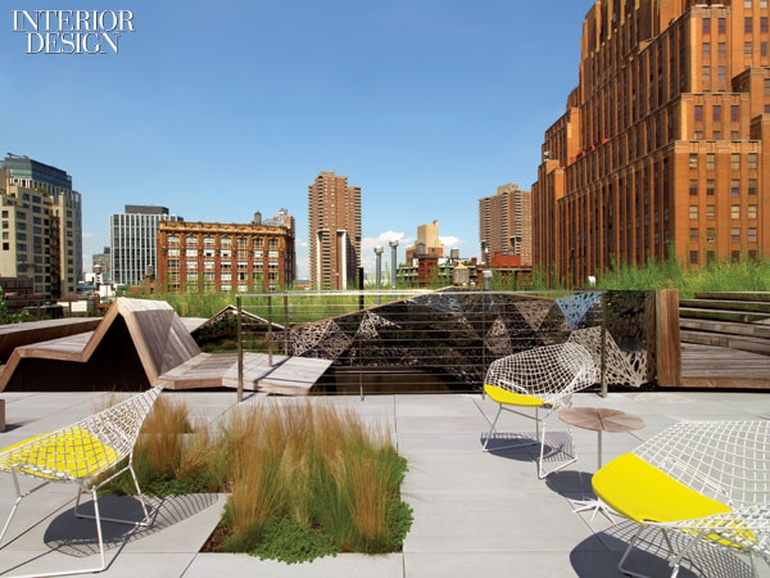 The manicured lawn, the hot tub, the indoor-outdoor kitchen. Steve E. Blatz Architect’s biggest residential project ever has all the trappings typical of a Los Angeles home. The only difference? This residence is smack in the middle of TriBeCa. Steve E. Blatz spent four years renovating the penthouse, built in 2004 on top of a landmarked low-rise, in order to create a Manhattan rarity: an urban oasis with more square footage outdoors (7,000) than in (5,000). “Contrary to what most people would do,” Blatz begins, “we actually reduced the space inside to maximize the outdoors and create a really wonderful relationship between the two.”

That balance was exactly what the penthouse’s owner, an outdoorsy thirtysomething software entrepreneur, had been looking for when he showed Blatz the penthouse. It had been languishing on the market for years. “Hideous,” the architect recalls. “Poorly designed and poorly built, with the primary views barely visible.” He drew up plans that involved first gutting the interior. Then he added floor-to-ceiling windows on the north and south elevations while subtracting a total of 400 square feet. It came out of the master bedroom, which gained a tree-lined private terrace, and the living-dining area, which gave way to a?glassed-in central courtyard.

Contributing a moment of Zen to the penthouse, the courtyard also contains the main access to the roof terrace: a?spiral staircase concealed inside a 16-foot-tall cocoon of laser-cut mirror-polished stainless steel fabricated in Italy. The perforated metal casts dappled light and shadows inside to mimic what it’s like standing beneath a canopy of tree branches—an effect underscored by the living area’s rug, its spot pattern developed with the same algorithm used for the cocoon. However, the most important function of the cocoon, Blatz says, is “to indicate that there’s something very special upstairs. Ascending is an almost baroque expe­rience.” Especially at night, lit by color-changing LEDs.

Up on the roof, he transformed barren tar and unsightly mechanical equipment into a glorious haven with not only the lush grass specifically requested by the owner but also?a wildflower meadow. Stretching along one side is an ipe deck folded into peaks and bleachers envisioned as?lounging space for parties—indeed, it came in handy when 50 friends were privy to a private John Legend concert bought at an auction to benefit City Harvest. At one end of the deck, it ramps up to surround a hot tub. The chaise longues nearby are ideal for admiring the Woolworth Building and 1 World Trade Center.

Views are treated with similar reverence inside. Blatz doubled the effect of the eyeful of terrace seen through the sliding glass doors in the master bedroom by mirroring the opposite wall. The master bathroom looks out to a small rock garden bordered by a privacy-providing thicket of bamboo. In places such as the dining area, horizontal slot windows strategically frame the skyline along with water towers and other charmingly gritty elements on local roofs. “To create a greater sense of being in TriBeCa,” Blatz explains.

Giving a nod to the neighborhood’s industrial heritage, patinated zinc panels, arranged in a staggered pattern derived from old loft buildings’ doors and elevator shafts, wrap a pair of large independent volumes in the public zone. These volumes are simultaneously evocative, decorative, and functional, housing the pantry, powder rooms, laundry, bicycle storage, and mechanicals—and thereby helping Blatz avoid carving up the apartment. He calls the fluidity “a younger way of dealing with space.”

He outfitted both the public zone and the three bedrooms with an artful mix of vintage, contemporary, and custom pieces that share a streamlined masculine sensibility. Rodolfo Dordoni sofas flank a cocktail table with a jigsaw-puzzle top in the living area. In the den, previously two bedrooms, a Serge Mouille swing-arm lamp extends from the wall to illuminate Jeffrey Bernett tub chairs on swivel bases. Upholstery on a biomorphic Finn Juhl lounge chair and a low-slung sleep sofa provides pops of orange in the office, intentionally darker than the rest of the apartment except, of course, the screening room.

A screening room? Are we back in L.A. all over again? Somehow this one—luxurious with a U-shape banquette covered in silk-mohair, ottomans covered in leather, and wall-to-wall hand-knotted silk carpet—manages to feel so very New York.