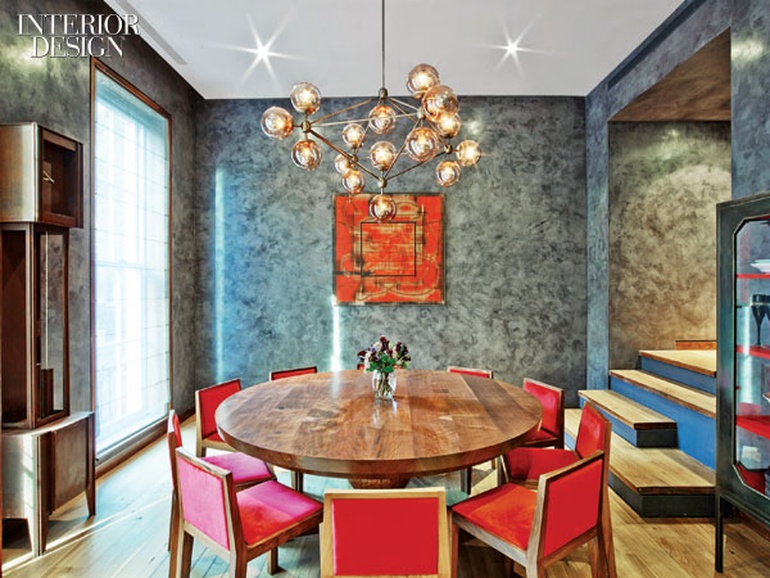 Possessing plenty of outward charm, starting with a location on a quintessential Greenwich Village block, the century-old town house purchased by a London family relocating to New York also boasted both a private garden and a roof deck with to-die-for views up to the Empire State Building and down to the financial district. The husband, who works in finance, and the wife, who  co-owns a contemporary-art gallery, loved the neighborhood and the house’s expansiveness—they have four children ranging in age from 1 to 13. However, the previous owners had completed a gut renovation that left the 7,800-square-foot, six-level interior rather soulless. Yes, it was like new, including an elevator, but every room was white except for walnut floors, walnut baseboards, and walnut surrounds on the doors and windows.

“The bones of the house were great, but it was a blank box, devoid of any personality. Luckily, that meant it was a clean slate we could take in any direction,” Revamp partner Danielle Fennoy says. “We gave it a little more drama, made it a little less pristine and a little more them.” The transplants’ stateside home is now anything but boring vanilla.

Fennoy and Cece Stelljes, the two Pratt Institute classmates who cofounded Revamp, infused the rooms with color, texture, and jovial nods to the family’s Britishness. In the entry, a cowhide rug takes the form of an oversize Union Jack. “We thought it would be a nice welcoming statement,” Stelljes suggests. At first, the couple weren’t sure about walking all over their country’s flag, but their sense of humor prevailed. “OK, we’re here to have fun,” they told Fennoy. Full steam ahead.

She and Stelljes had lots of fun rehabbing the elevator. The cab’s wood-grain plastic laminate resembled something out of a 1970’s office building. So Revamp, well, revamped it by upholstering its walls with tan leather quilted with renditions of a thronelike armchair, a chandelier, and picture frames to suggest an English drawing room. All are outlined with bright red stitching, and matching carpet completes the whimsical effect.

Much of the house’s newfound warmth comes from the choice of wall treatments. The dining room went from bland to bold courtesy of deep gray Venetian plaster with a shimmery metallic finish, offsetting jewel-toned chair upholstery and vivid artwork. Wall coverings appear in numerous rooms, to varying effect. The?master bedroom’s lustrous blue silk creates a soigné retreat. For the kitchen, an elaborate pattern was customized to fade gradually toward one end of the room, creating a softer transition to the stair hall. In the two oldest daughters’ shared room, pastel-colored butterflies flutter across walls. The silhouette of a favorite British soccer player, mid-kick, brings life to the teenage son’s room. Best of all is the ceiling of the master suite’s dressing room, where a kaleidoscopic pattern combines with feather-festooned drum fixtures and a sheepskin rug to give this inner sanctum a sexy glam-rock vibe.

Revamp’s most eye-popping intervention remains unseen by casual visitors: a lap pool. The logical spot for this luxury amenity was the rear of the basement, which could be divided, lengthwise, between the pool and a gym. “But we were worried about the gym feeling cramped,” Stelljes recalls. Then Fennoy asked, “Why don’t we make one side of the pool clear, like a fish tank?” And that’s what they did. Floor-to-ceiling acrylic panels, framed in steel, allow underwater views from the treadmills and stationary bikes. The?pool’s other sides and bottom are  brushed stainless steel, while walls above the waterline are covered in bright blue glass tile. Because the rear of the basement extends beneath the garden, glass blocks set into the ceiling bring in daylight.

Just before the lap pool was due to be installed, Hurricane Sandy struck, closing bridges and tunnels and putting construction on hold. Finally completed, the pool has become a focus of family life. As Fennoy says of her energetic clients, “They use the hell out of this house.” The husband does laps several times a day. The children enjoy swimming lessons at home. And it wouldn’t be unheard of to find guests at the lively parties taking a dip.