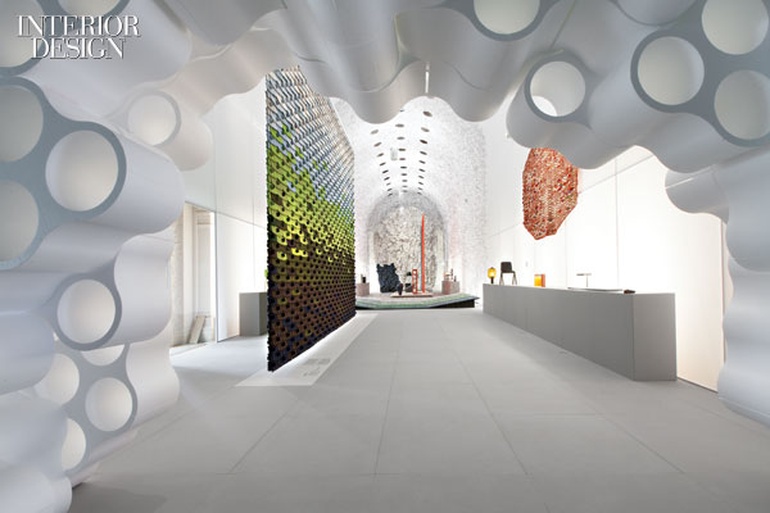 A certain amount of interaction is encouraged at “Ronan et Erwan Bouroullec: Momentané,” the Paris museum Les Arts Décoratifs’s summer-long exhibition showcasing the Bouroullecs’ 15-year career. You’re invited to remove your shoes and lounge on a canted platform composed of padded planks covered in green, blue, or gray felt. You’re also permitted to try out a number of workstations, though evidently some members of the public fiddle too much with the task lamps. “I’m just going to set these right,” Erwan Bouroullec says, interrupting our tour. The younger of the two designing brothers, he moves over to one of the office systems displayed and makes sure all the integrated lamps have their shades correctly pointing down. He then turns his attention to a group of tables and chairs, swiftly moving them back into place.

The brothers’ proprietorial attitude is understandable, since their firm, Ronan & Erwan Bouroullec, was responsible for not only all the product on show but also the installation. Through September 1, it occupies the temporary-exhibition galleries at the museum, located in a wing of the Palais du Louvre. That’s 13,000 square feet comprising a vertiginously high central nave, with ornate pillars and mosaic flooring, and the more modestly scaled rooms on either side.

While this is certainly not the brothers’ first exhibition—Ronan Bouroullec estimates they’ve participated in around 30—none has been in such a grand setting. “The dimensions,” he notes, “are quite exceptional.” They are also a problem. “We had to fight the monumentality,” Erwan Bouroullec admits. “A classical building like this is not easily adapted for contemporary interventions. The contrast with the architecture is just too strong.” The solution, the brothers decided, was to insert a white canvas barrel-vaulted structure to define a volume that’s no longer overwhelming yet still able, at 38 feet high by 30 feet wide by 130 feet long, to accommodate even the biggest of the pieces.

Along with the lounging platform, originally seen at London’s Victoria and Albert Museum, they include the spectacular modular screens that have become Bouroullec signatures. Clouds tiles, made of thermo-compressed foam and felt, interlock in a mass secured by rubber bands. Small branchlike Twigs modules in injected polypropylene link in serried ranks. A web of spidery injected-polyamide elements called Algues resembles diaphanous seaweed.

Suspended from the frame of the canvas enclosure, the screens serve simultaneously to structure the space and to guide visitors. “We tended to leave everything extremely open in the past, but sometimes that could be a little disorienting,” Ronan Bouroullec says. “This time, we take the public by the hand and lead them on a very precise route.” Algues, for instance, spans the width of the nave, forcing museum-goers to make a detour into the gallery on the left, which is devoted to a mix of office furniture and drawings, some of new products and others simply quirky. Ronan Bouroullec’s drawings tend to be abstract and brightly colored. His brother’s often feature animals—one surreal example depicts a dog with a man’s face staring at a long-beaked bird. The gallery on the other side of the nave displays primarily residential furnishings as well as ephemera that gives insight into the brothers’ working methods. Photos show Ronan Bouroullec in a craftsman’s atelier in Japan; sketchbooks,models, and prototypes fill recessed glass cases.

The aim throughout is to demonstrate the depth and breadth of the Bouroullecs’ oeuvre. There’s furniture for Cappellini, Established & Sons, Kartell, Ligne Roset, Magis, and Vitra; lamps for Flos; bath fixtures, fittings, and accessories for Hansgrohe’s Axor brand; fabric-based products for Kvadrat; and tableware for Alessi. The Hole chair, a classic introduced back in 1999, meets the recent Ready Made Curtain, an easy-to-install drapery kit. The brothers seem particularly proud that their output runs the gamut from mass-produced items—more than 8 million Algues modules sold—to more rarefied limited editions such as the Lianes fluorescent pendant fixture in fiberglass, solid-surfacing, and leather, commissioned by Paris’s highly influential Galerie Kreo. (Karl Lagerfeld is a client.)

Don’t look for a sense of chronology, however. You won’t find it. Objects from different periods are assembled to highlight similarities or, just as often, to emphasize differences. The one exception is Vitra’s office furniture, quite deliberately grouped together. Why? The collection seems to have a special significance for the Bouroullecs—the Joyn communal table and the Alcôve high-backed sofa in particular. “Joyn changed the way people look at open-plan spaces, and Alcôve inspired thousands of copies,” Erwan says. “They’re both real landmarks.” Rather like the exhibition itself. As Ronan adds, “It’s the end of an era. We’ll never do a show like this again.” Let’s hope he proves to be incorrect.