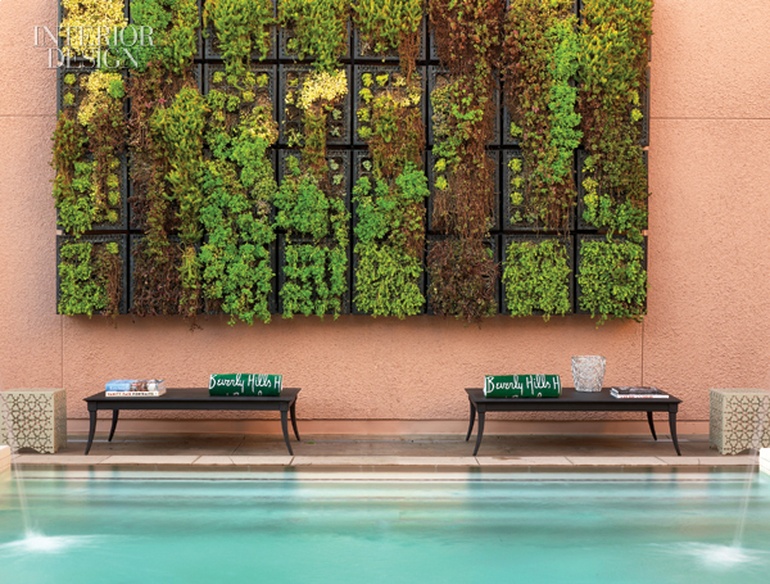 Lauren Rottet is on a roll. With only one hotel project to her name, the Interior Design Hall of Fame member scored big with a commission from the Beverly Hills Hotel, a Los Angeles grande dame now operated by the Dorchester Collection, to build a pair of "presidential" bungalows. That was a little more than two years ago. By now, Rottet Studio's hospitality roster has swelled to include a half dozen more hotels, for the likes of Rosewood Hotels & Resorts and the James boutique brand. Not bad for a firm previously identified with legal and corporate offices.

They're called bungalows, but for most of us they'd be dream houses. Each is 3,500 square feet with three bedrooms and baths. Cabinetry finely crafted in ash and burl veneer, wrapping a study, recalls luxury liners from yesteryear. The fully outfitted kitchen stands ready to serve executives skipping the power breakfast at the Polo Lounge. And how about a dressing room harking back to Hollywood's golden age-where a gal can have flashbulb-perfect hair and makeup done for the Academy Awards? Add an immense closet with a bank vault specifically built to accommodate a piece of roll-aboard luggage, jewel-filled or not, and we're beginning to scratch the surface of the luxury provided.

Nevertheless, from the perspective of the intended clientele-heads of state, Middle East potentates, and other members of the 1 percent-the bungalows are just. . .bungalows. "They're not meant to be mansions," Rottet says of the nearly identical retreats. Instead, she and principal Richard Riveire administered just the right amount of California glamour, minus the glitz. They walked that fine line gracefully.

"I have so many friends with multiple homes, and Beverly Hills is still their favorite place," Rottet continues. "These bungalows could be nowhere other than the Beverly Hills Hotel." Leave high-traffic Sunset Boulevard for the hotel's glorious grounds, and be transported. Rottet and Riveire first focused on the quintessentially Californian indoor-outdoor connection, reinforced by sight lines straight from the impressive foyers, with their nearly 13-foot ceilings, through the great rooms to the private swimming pools. At the same time, the architects never hesitated to feature their hallmarks, such as blue-chip contemporary art: Note the Claes Oldenburg and Coosje van Bruggen lithographs here.

Background moves are the same in both bungalows. Raised-beam ceilings recall the beloved L.A. house where Rottet lived for seven years before moving back to Houston. Floor planks are walnut, like much of the millwork. Fireplaces, six per bungalow including one outside, have limestone hearths and surrounds. Mirrors abound. "I always have them," she says. "They make a room seem as if it never stops."

Abundant, too, are custom furnishings. They're two-offs, fabricated in or around L.A. The city, Riveire notes, "has a great tradition of craftsmen, second and third generation." Sectionals and lounge chairs are upholstered in neutral mohair tinged pale pink or green in deference to the hotel's famous palette. Dining chairs, surrounding a walnut table for 10, are tougher in vinyl detailed with polished nickel studs. Lamps and chandeliers are in nickel-silver plate or painted steel. "We've been doing a lot of lighting-for cost as well as for design," Rottet says. Rugs showcase her deft hand in abstracting nature. Ditto for the walls of the den. Riveire asks with a grin, "Did you ever think you'd see Rottet Studio designing wallpaper?" The den's stylized interpretation of pine trees is perhaps a distant cousin of the banana-leaf pattern that's practically synonymous with the hotel. For a more literal reference, check out the banana-leaf carvings on the sink vanity in the master bathroom.

When your bathroom is essentially a spa in situ, why bother with the hotel spa? In addition to the soaking tub for two are a steam shower and an outdoor shower that's claimed as unique for L.A. hotels. The living area's entertainment center, another reason why guests need never leave, offers a movie-worthy 65-inch flat screen, plus shelves of novels and books on art and design. Mere steps away, the swimming pool comes with an underwater speaker system.

To optimize booking options, each bungalow has a three-key count. All bedrooms lock separately, so you can reserve, say, the master suite alone instead of the whole shebang. Of course, Marlene Dietrich and Marilyn Monroe preferred to have a bungalow all to themselves when they came to stay in the 1940's and '50's. And we don't believe that any strangers were sharing with John Lennon and Yoko Ono in the '70's. That's progress for you. This year, the hotel turns 100.