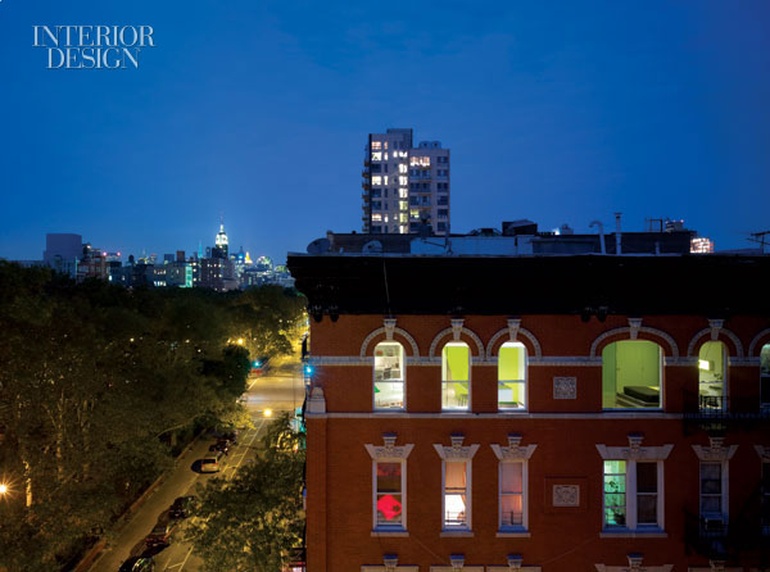 Behind the steel security door of a New York tenement building, fluorescent fixtures cast a cold glow on the entry's smudged floor tiles. Past the entry is an endless series of landings with mismatched welcome mats. Finally, five flights up, you're grateful to see the door of one apartment ajar. It belongs to Koray Duman of Sayigh Duman Architects.

"The building is not well kept, but that doesn't scare me at all," he says in his charming Turkish accent, flashing a wide sympathetic smile. "The interior of the unit is more important." As is the neighborhood. Chinatown is his favorite, and this walk-up is close enough to offer him a ringside seat for the Lunar New Year parade staging area, with floats fringed in red and golden yellow waiting on the street below.

When he first saw the 750-square-foot corner apartment, it had been carved up into a three-bedroom in a slapdash 1980's renovation. Gypsum-board walls on steel studs gobbled up quite a bit of the limited space, to say nothing of a ceiling that had been dropped 2 feet. There was a bunk bed shoved against one of the eight windows, and dark velvet curtains blocked the view of a sliver park across the street and the skyline beyond. The plan he sketched in an evening marathon with his firm's other principal, Laith Sayigh, called essentially for a clean slate. On the day the sale went through, a crew arrived to tear down walls-the start of four months of work.

In the chaos of construction, Duman took care to preserve a bit of history in the form of scraps of ancient kitchen wallpaper still clinging to original plaster. Most of the other walls are exposed brick finished with a sheer white-pigmented sealer chosen to reveal more character than white paint would have. Bleaching the new white-oak floor, he used a wipe-off finish to ensure that the freshly sanded look would remain in perpetuity.

Gypsum-board was not entirely banished from the renovation scheme, however. The gyp-board ceiling, now dropped only 6 inches, incorporates indirect lighting and surround-sound speakers. Along the wall opposite the longer run of windows, the bathrooms, the laundry machines, and closets occupy a gyp-board enclosure. "Everything that you want to hide is inside," Duman says.

The idea at one point was that the kitchen would pivot out of that volume when needed, but the plan proved too complicated and expensive. Instead, the kitchen extends perpendicular to the enclosure-painted a chartreuse that Sayigh helped to pick. "We felt that it's representative of our time," he explains.

As Duman was struggling to find a sofa big enough to anchor the living area yet small enough to carry up the staircase, a friend offered assistance custom-designing a seating island in two pieces. So he and her firm, Carol Egan Interiors, collaborated on a pair of egg-crate bases that could be built from digitally milled plywood fins. "Like a lot of others in our generation, we are very interested in digital technology," he says. To identify the final position of the fins, each of them was incised with a code that, incidentally, remains visible below the white top-stitched upholstery.

Carol Egan also brought in the living area's colorful, mod shell chairs by Poul Kjærholm and polished stainless-steel cube cocktail table by Interior Design­ Hall of Fame member Joseph D'Urso. For the bedroom, she contributed to the design of a platform bed made by stacking layers of heavy gray wool felt. A zoomy wall-mounted nightstand was entirely her inspiration-the outfit that made the egg-crate bases can furthermore carve plasticized foam for experimental furniture. (She hopes the piece will one day serve as a prototype for her own furniture line.)

Duman splurged a little on the powder room, which is tiled in a honeycomb bas-relief. "When you're an architect, there's pressure to find the perfect materials," he says. But in the master bathroom-really just a clear glass shower enclosure and open sinks in the bedroom, plus a water closet-the tile is simplicity itself. The walls and floor sport ordinary 4-inch white squares. "It's actually the cheap­est tile you can get," he admits. Painstaking installation is what gives the squares their graph-paper look, and the gray of the grout drives home the allusion to a grid drawn with great precision in pencil, on pristine architectural vellum.