Over the River and Through the Woods: ZGF's Randall Children's Hospital 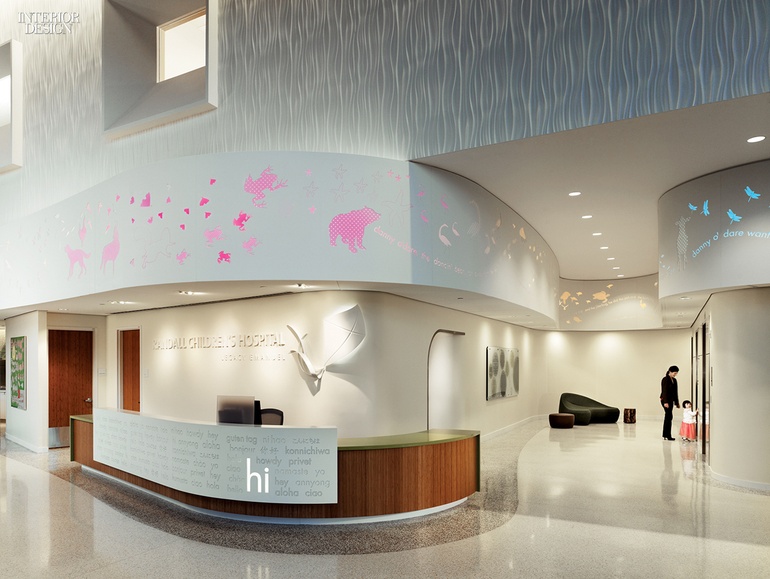 Of course, no one wants to go to the hospital—mostly for the obvious reasons. But the design has something to do with it. Those waiting-room chairs, those antiseptic floors aglow under fluorescent buzz. Yet, at the same time, the clinical aesthetic is oddly reassuring, as if to say, “There are more important things at stake here than color palettes.”

The challenge of hospital design, then, is to balance competing reactions, to keep intact the message of serious treatment while softening the medical glare. Just because you’re in professional hands doesn’t mean you can’t be comfortable. A good hospital should visually “reflect the quality of the care,” Zimmer Gunsul Frasca Architects principal Sharron van der Meulen says. “It has to look respectable but welcoming, deinstitutionalized.”

Van der Meulen, an interiors specialist, and partner Robert Frasca, overseeing architecture, accomplished just that with the new Randall Children’s Hospital at Legacy Emanuel Medical Center in Portland, Oregon. The first thing you see from the Fremont Bridge crossing the Willamette River, the nine-story, 330,000-square-foot building had to strike the right note in softening the institutionality of Legacy Emanuel—as venerable as it gets, at a century old. “Optimistic” is how Frasca describes the Randall’s tone. Reminders of the natural world are a major factor, starting with the garden outside the lobby.

Since patients come from every part of Oregon, Van der Meulen cast her net wide, gathering inspiration from all corners of the state: the Pacific coast, the Cascade Range, the eastern high desert. Each hospital zone is themed to a region: soothing ocean blue or cheerful sun yellow in the neonatal intensive-care unit, lush mountain green in outpatient areas, desert orange in day surgery. And each level gets a native animal for a mascot, its silhouette serving as a way-finder.

Whether etched into glass partitions or housed in birdhouse-shape vitrines, the deer, foxes, bears, mustangs, salmon, and hummingbirds are friendly and bright. The motifs are a refreshing spin on what, in most children’s hospitals, would surely devolve into cartoonishness. “We serve patients up to 21 years old. Are kids of even 12, 13, or 14 going to identify with SpongeBob?” Legacy Emanuel vice president of hospital operations Bryce Helgerson asks.

Then there’s the age range of the visitors. “It’s family-centric care. We don’t have signs saying Visitor Hours 10:00 to 4:00,” Helgerson says. That means parents and extended families have to feel welcome as well. Take the check-in and reception desks. At a child’s height, animal shapes light up. “You and I won’t notice that,” he continues. “We’ll see a beautiful piece of art on the wall behind.”

In the patient rooms, some things can’t change. Easy-to- clean vinyl floors are here to stay. But the Randall gave Van der Meulen freedom to alter some elements that are off-limits in most hospitals. The standard bedside table, a nuisance to nurses and unused by families, morphed into a mobile multitasker for meals or computer work. Head-walls, which store an arsenal of medical gadgetry, are often package items, ordered from a catalog. But ZGF built a handsome version out of bamboo-veneered panels, then used them for an enveloping canopy. “Is bamboo indigenous to Oregon? No,” she admits. “But it is rapidly renewable and ties together with the lobby, lounges, and nurses’ stations.”

While focused on the comfort of patients, the rooms also take the full family experience into account. The sleeper sofa, for example, is roomy enough for two parents or a parent with a second child. In fact, there’s hotelquality furniture throughout. “We blur the line between hospitality and health care,” Van der Meulen notes. Another overlooked facet of hospital design is designated areas for family members. “Often, lounges are the leftover space,” she says. Here, they get prime real estate. Stacked at a glass-wrapped corner with an epic view of the Cascades, these double-height rooms are each outfitted with a kitchenette, an entertainment center, and upholstered furniture for work or simply relaxing together. Also stunning are the staff lounges, overlooking the gardens. The third story’s quiet winter garden, which opens onto a terrace, offers a respite and retreat for both families and staff.

Escape is woven into the hospital’s fabric. As the sun sets over the Pacific, and Portland’s lights come up, constellations of LEDs glow in the lobby. Hallways are quiet. You might just forget you’re in a hospital at all. Which is exactly the point.