For the Sake of the Lake: Lakeside Vacation House by Kaufmann Widrig Architekten 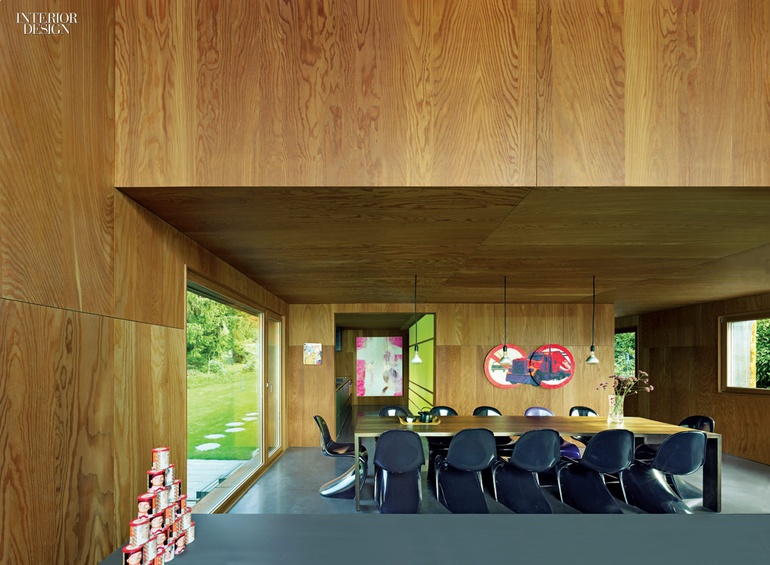 Not often do you get the chance to buy the former site of a Roman temple. Nor the location of one of the first movies ever made. But that very opportunity came about for real-estate developer Marc Dee when he was looking for a place to build a vacation house. One of the last parcels of undeveloped lakefront in Thonon-les-Bains, France, the property had appeared in a film by Auguste and Louis Lumière, the brothers credited with the invention of cinema. All that history, combined with the Lake Geneva panorama, was irresistibly appealing for Dee—despite two significant negatives. The 1/2 acre was long and narrow as well as being on the part of the shore where the sun decamps early, behind the mountains. "It's the dark side," Dee acknowledges. To address these drawbacks, he returned to Kaufmann Widrig Architekten, which had designed a previous villa for him, his wife, and their two daughters.

Researching the area, Michael Widrig explains, "We saw two typologies, big stone villas and smaller wooden boathouses." The house that he and Daniel Kaufmann ultimately constructed could, at first glance, be mistaken for a boathouse, thanks to the slender footprint and the woodlike tones of the oxidized steel cladding. The steel was selected not only because it reminded Dee of an Ateliers Jean Nouvel building he admired but also because the metal is "a reference to the way boats rust with age," Kaufmann notes. Widrig adds, "It recalls the boathouses without seeming artificial."

The height of the 3,700-square-foot house angles upward in staggered sections as it approaches the lake. At the far end, with the water a mere 20 feet away, almost the entire elevation is a square window fronting the double-height living area. There's also a clerestory each time the roof rises, eliminating the need for the added brightness of recessed ceiling fixtures. Flooring is dark gray waxed concrete, and walls and ceilings are paneled in locally sourced larch, a wood often used in alpine chalets. It turns silvery when it weathers outside. As it ages inside, it becomes more orange, Dee notes. Here, the larch grain has a moiré effect.

Dee did the decorating himself, combining antique, vintage, modern, contemporary, and custom furnishings with his extensive collection of Latin American contemporary art. "I have an allergic reaction to the white, minimalistic houses built in the last 15 years," he admits. "If you put a pack of cigarettes on the table, the whole place is a mess. Mine was going to be uncomplicated." His version of "uncomplicated" might entail, for?example, the living area's ensemble of a daybed by Ludwig Mies van der Rohe and a lounge chair and footrest by Charles and Ray Eames facing a pair of Danish vintage armchairs and a floor lamp by Tom Dixon.

Black leather upholsters all the seating, and the sculptural fireplace of polished steel is likewise black. "It's not matte and not shiny but somewhere in between," Dee notes. Black continues to dominate with the bookcase that serves as a barrier between the living area and the dining area, up a short flight of stairs. And, yes, the Verner Panton chairs at the dining table are shiny black plastic. Nonblack makes its biggest splash in the adjacent galley kitchen, where the cabinets are painted citrusy green and yellow shades developed by Le Corbusier. Upstairs bathrooms are tiled in Corbu-esque green and blue. "It's what you saw in swimming pools in the 1960's and '70's," Dee says.

Of the three bedrooms upstairs, the master is the one that best demonstrates his passion for art via a grisaille drawing and a trio of colored-pencil portraits, all on a "bed" theme. For the dining area, he chose artwork comprising a pair of stolen traffic signs with the image of a Coca-Cola truck stenciled on them. The entry features a gold-plated sculpture of a man's head and a hanging made of trash. Art creation takes place on the premises, too. Right off the entry is a studio centered on a long Hans Wegner table and chairs.

Dee's interest in history and patina is perhaps best represented by the house's oldest piece of furniture: the Louis XVI desk in his office, an upstairs niche overlooking the living area. "Marks on furniture, dents in materials. . .this is in French culture," he says. "We don't like things to look new all the time. We like to see how something lived." Apparently, the scuffs on the mahogany top of his desk were made by its original owner, philosopher Denis Diderot.