Around the World in 20 Stores: Peter Marino and Louis Vuitton Land in Shanghai 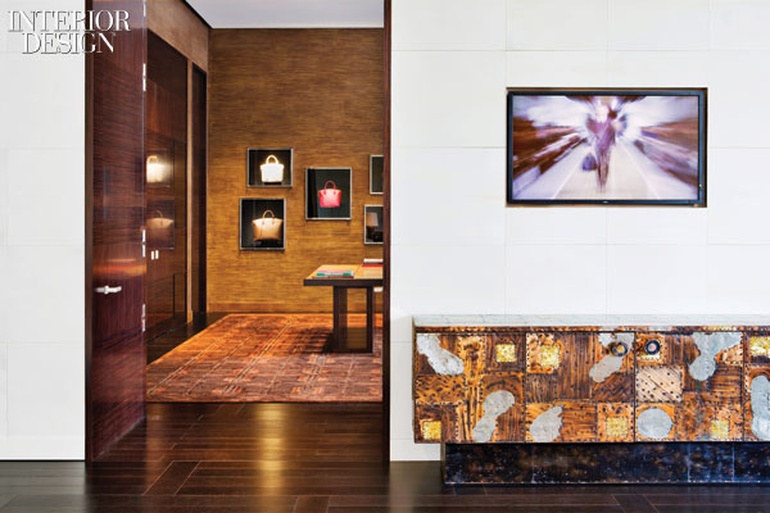 Need proof that Shanghai is nipping at the heels of Paris, Milan, and New York as an epicenter for fashion brands? Look no further than a “Maison Louis Vuitton” by Interior Design Hall of Fame member Peter Marino—in a mall that also offers Giorgio Armani, Balenciaga, Céline, Chanel, Christian Dior, Dolce & Gabbana, Fendi, Hermès, Lanvin, Prada...the list goes on. Equally mind-boggling is Peter Marino Architect’s history with Louis Vuitton, starting in Paris in 1995. “They hired me for the Champs-Élysées store, which today gets 2.6 million visitors a year,” he says. “Lately, I’ve been averaging seven projects a year for the brand.”

First, some background on the Maison designation. It means that a store carries the entire Louis Vuitton collection. And no two Maisons are alike. In Singapore, for example, another Marino-designed Maison is a nautical tour de force befitting its waterside setting. Whereas this glamorous Shanghai cousin, at four stories and 43,000 square feet, is “about the bustling, hustling nature of a city that’s both a fashion and a finance capital,” he notes. “It’s all about commerce and totally vulgar, which I adore.”

Here’s how things work at the Maison in Shanghai. Access comes either through the mall or from the street. Inside, probably the most unusual aspect of the shopping experience is the fifty-fifty split between men’s and women’s areas. All those high-powered male financiers, requiring high-fashion suits, have successfully challenged women’s typical sales supremacy. After luggage, accessories, and fine jewelry (ground level) come menswear (second), women’s (third), and two VIP salons (fourth).

All levels are connected by a spiral staircase, a multi-ton feat of construction intended as a customer magnet, luring ’em in to?drop megabucks—or euros, pounds, or yuan. The steps are a rare Iranian onyx, its brown-gold-white mélange coincidentally referencing classic Louis Vuitton colors. The gleaming balustrades have been electroplated in a pale champagne color. (Think fellow LVMH Group brand Moët & Chandon.) On walls surrounding the stair, paneling sports “a speedy stripe, like seen from a train,” Marino explains.

Each level is composed of a series of lounges that read not exactly retail but more residential, as if an art aficionado lived here. Which brings us to a subject near and dear to Marino’s heart. “Art is a big part of what I am and what I do,” he says. “I call my career art-chitecture.” According to the New York Times, his personal collection includes 37 Renaissance bronzes, 11 Andy Warhols, and a Damien Hirst spot painting.

For the Maison in Shanghai, Marino embarked on a commissioning spree, tapping a coterie of French, German, and American artists to accompany the Chinese, both established and emerging. Around the base of the stairs stands a trio of colossal “pagodas,” as he describes them: sculptures derived from an image on the yuan note. Suspended overhead in fine jewelry, another sculpture resembles a canopy of chain mail. Upstairs in men’s, the regal purple of a mixed-media work really pops amid vintage seating by Kaare Klint and Arne Norell. A women’s fitting room boasts wall covering based on original artwork. There’s even a golden wall sculpture in an elevator vestibule—revealing Marino’s philosophy that art goes everywhere, not just the focal points.

Ubiquitous, too, are the custom furnishings and fixtures, taking cues from the brown, beige, gold, and brass of the classic LV steamer trunk. “I never use pure black,” he states. Backgrounds are variations on the theme, interpreted in an array of materials. Stalactite stone prevails for flooring, punctuated by an 8-foot-wide runway of Iranian onyx leading from the mall entry to the spectacular stair. Walls are surfaced in either eel skin, straw, metal mesh, or resin-flecked lacquer. Vitrines combine brass with composite wood, a nod to sustainability. When not custom, furniture boasts such international signatures as André Dubreuil, Alessandro Mendini, and Paul Evans.

The mood shifts a bit on the women’s level. Although equally luxe, it’s white and bright. It’s also the area that pays the most homage to Louis Vuitton creative director Marc Jacobs. “The brand’s new femininity is based on Marc, and Shanghai is the first store to reflect it,” Marino says. Indeed, the reds, pinks, and yellows on the sofas, armchairs, and pillows could have come straight from the spring-summer 2013 runway show.