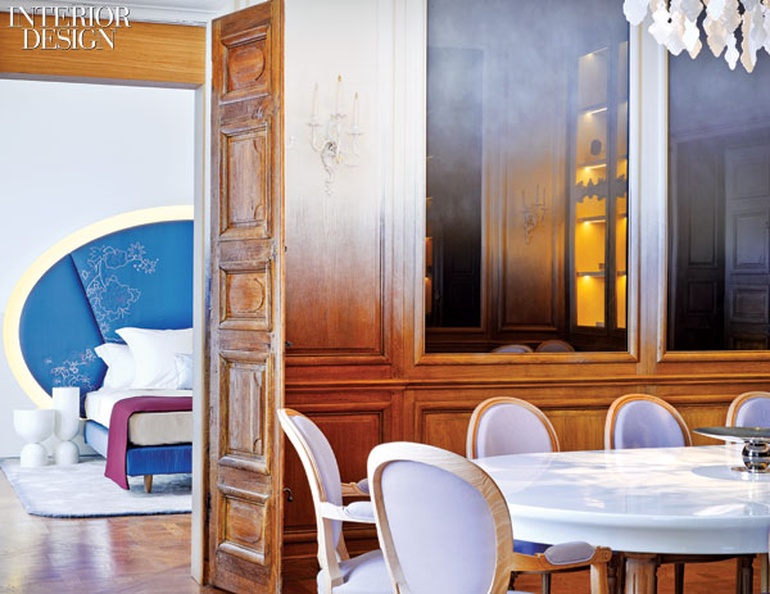 On the edge of Paris, where the wealthy 16th Arrondissement meets the leafy Bois de Boulogne, an apartment building is hidden from the street by a wrought-iron fence and a thicket of greenery. The building is 1930’s art deco, but the duplex maisonette that Ramy Fischler was asked to renovate had evolved, he says, into “a mix of many eras”—starting with the 18th-century paneling in the living and dining rooms—after passing through the hands of many different owners. The latest ones, a couple who bought the 3,800-square-foot duplex as a pied-à-terre, are decidedly traditionalists.

Fischler, however, is resolutely contemporary. Before founding RF Studio, he’d worked for Interior Design Hall of Fame member Patrick Jouin for nearly 10 years. So the mélange devised for the duplex is uniquely witty and full of surprises.

The stage is set by the entry hall. It’s lined with trompe l’oeil full-length “curtains,” plaster shaped into folds and hand-lacquered in varying shades of white. For the flooring, Fischler laid pink-veined Burgundy limestone in a pattern that imitates a narrowing perspective. Where the sight lines converge, at the far end, tradition gets a wink in the form of a large framed photo reproduction of a famous painting of one of Louis XIV’s hunting dogs. This version was digitally printed on two mirrored panels, the doors of a coat closet.

In the adjacent living and dining rooms, Fischler replaced the parquet de Versailles, badly damaged, with identical oak squares. He also removed and restored the 18th-century paneling, then returned it—with a twist. Since those two ground-level rooms don’t get a lot of daylight, he brightened them up by painting the top of the paneling the same brilliant white as the ceiling. The paint fades out as it descends, leaving the natural-finished oak visible, a startling effect like a shimmering ghost. Another note of fantasy: Scattered sprigs of white porcelain roses sprout randomly from the woodwork.

To literally lighten up the gravitas of the living room’s brown marble mantelpiece, Fischler laid pearly glass on top and up-lit it. Overhead illumination for the room as a whole comes from a circular ceiling cutout ringed with an LED halo and spots. Existing Louis XV–style sconces, mounted on the painted part of the paneling in both the living and dining rooms, have likewise been coated in white. Ditto for the dining room’s chandelier, originally gilt and crystal.

The dining room’s lozenge-shape table and medallion-back chairs are Louis XVI in style. But the tabletop wears gleaming white lacquer, and the chair frames’ natural oak might have shocked Marie Antoinette with its unvarnished nudity. Alongside, bronzed mirrors add a smoky effect.

Furniture, whether contemporary or traditional, is couture-caliber, almost all handmade by the same artisan cabinetmakers. Rugs are also custom. In the fairly spare master bedroom, the few major pieces embody the mix of?new and old. An internally lit resin frame surrounds the bed’s oval headboard, upholstered in hand-embroidered blue silk. Next to the bed stand a pair of Jaime Hayon tables resembling abstracted chess pieces. Across the room are a standing lamp, pure 1950’s, and a Louis XVI–style recamier for lounging. Above them, a Louis XIV–style carved and gilded frame contains a mirror—its glass integrates a hidden TV screen, which becomes visible with the touch of a remote control.

Parquet de Versailles from the master bedroom extends part-way into the bathroom, then changes to white resin that repeats the parquet pattern. In the same vein, the mirrors’ ornate frames pick up the motifs of the paneling in the living and dining rooms. Mirrors aside, the bathroom walls are dazzling Calacatta marble—even the doors to the shower and water closet are marble-clad. The only splash of color is an inset photo reproduction of an 18th-century painting of chubby cherubs.

White resin flooring also reigns in the kitchen, housed in an extraordinarily free-form extension that Fischler describes as “theatrical.” It’s lined with white-lacquered cabinet doors—the cabinet interiors and the counters offer a contrast in natural-finished walnut. Such a large eat-in kitchen is unusual in Paris. “But the owners like to spend time in the kitchen. For them, it’s a place to relax,” Fischler says. Casual meals take place beneath a glass-bubble chandelier by his mentor, Jouin.

Guests can relax in their own suite, downstairs. The sitting room’s hidden charms include another framed photo reproduction, this one with a lower section that flips down to become a desktop. There’s also a bookcase that disguises a closet door. The guest bedroom, meanwhile, is all-contemporary. With its upholstered walls, it’s a chocolate-colored cocoon equipped with sound-and-light units called NightCove. One of Fischler’s projects when he was at Jouin’s firm, they’re designed for cool, high-tech sleep.