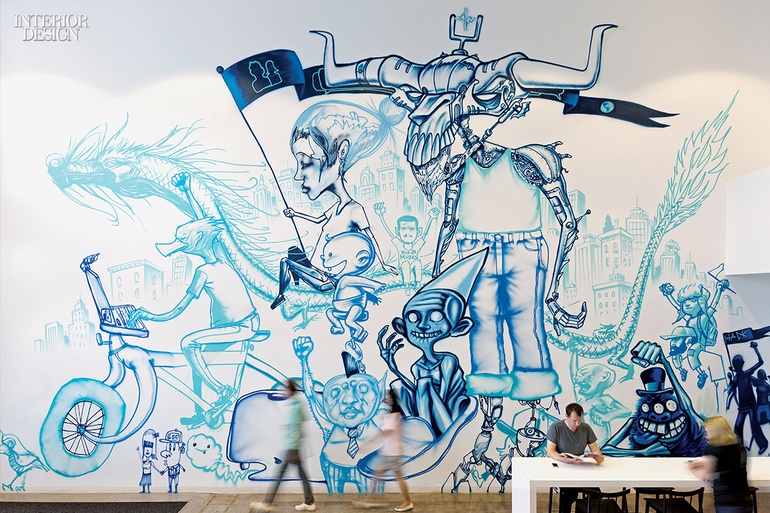 Facebook dominated headlines when it became a publicly traded company and, one day later, CEO Mark Zuckerberg had a surprise wedding and changed his relationship status to “married.” That made him just one of 955 million people who use Facebook as a platform to post updates on their love life or photos of their trip to Rome. So it was important that employees could have a similar degree of self-expression, in the physical domain, when they moved to a new Silicon Valley headquarters, the former Sun Microsystems campus in Menlo Park, California, to be specific.

Built in the 1990’s and abandoned after Sun was bought by Oracle, the nine buildings offered a labyrinth of private offices and cubicles—the antithesis of Facebook’s anticorporate culture. But that didn’t faze Gensler senior associate Randy Howder, who’d already completed Facebook offices in London and Seattle. “The Sun campus hailed from an era that was the beginning of the end of a certain kind of architecture for technology companies. There was a one-size-fits-all approach,” Howder says. “Facebook told us, ‘We need you to help us ensure that, as we move into this corporate environment, it doesn’t make us corporate.’” Zuckerberg is known, after all, for wearing a hoodie and jeans to meet potential investors.

For the initial phase of what will eventually be a 1 million-square-foot project, Howder tackled the two-story building designated to house business-support functions. Much of that job involved stripping out private offices to make way for the social networking opportunities offered by open neighborhoods of workstations linked by break-out areas. The result has an in-process look that fits with one of Facebook’s mottos: “This journey is 1 percent finished.” Score marks on the concrete floors, where the office enclosures used to stand, persist as reminders of the hierarchical past. All doors and ceiling tiles were existing.

“One of the great things about Facebook is that, because the culture is so strong, it has a way of leaving its mark on whatever space it’s in,” Howder says. “There’s no corporate branding department that gives us Pantone colors we have to match with the furniture and carpet.” Facebook was even confident enough not to bother removing many of Sun’s logos.

“We had our younger designers work on the initial building, so they could bring a fresh approach,” he continues. That approach has served as a prototype for the deconstruction and renovation of the rest of the campus. But to be absolutely sure that no corporate aesthetic takes hold, no matter how anticorporate in spirit, he brought on a different lead designer for each building, and being a workplace specialist wasn’t a qualification. For an engineering building, Gensler’s lead designer on San Francisco International Airport’s Terminal 2 headed the team. A hospitality expert was responsible for the sales-and-marketing building.

Regardless of this abundant expertise, what Facebook had in mind was less design, not more—a blank screen for employees to personalize continually. Standard contract furnishings met with skepticism. “Facebook looks at them as being already figured out in a way that doesn’t allow for staff’s own interpretations,” he says. “Let’s say we discovered that engineers need to huddle around their laptops together. There are products out there that respond to that need, but Facebook employees are more interested in making those things themselves, because they can innovate.”

Right from the initial visioning session, the discussion focused on individual artistic expression. Employees scribble on walls coated with chalkboard paint. On other walls hang framed sections of graffiti murals sliced out of locations at the previous headquarters—think cut-and-paste. Still other walls he agreed to leave empty for new murals. Facebook commissioned several from professional artists, but most pieces are employee-generated. Staffers with an idea for a mural or a graffiti tag they’d like to add simply check with nearby coworkers to see if they’re OK with the idea. Howder puts it this way: “Design to a certain point. Then let the users finish the rest.” That’s letting go more than he’s used to, but it’s in keeping with the improvisational and crowd-sourced nature of Facebook’s own process.

An in-house screen-printing studio, aka the analog research laboratory, develops motivational slogans to print on posters and paint on the walls. “Move Fast and Break Things” and “Hack Early, Hack Often” are favorites. Another is “Our Work Is Never Over.” That might also describe Howder’s experience with Facebook. Not only is the 400,000-square-foot final phase of the headquarters project still under construction, but he’s also working on satellite offices in Tokyo and São Paulo, Brazil.