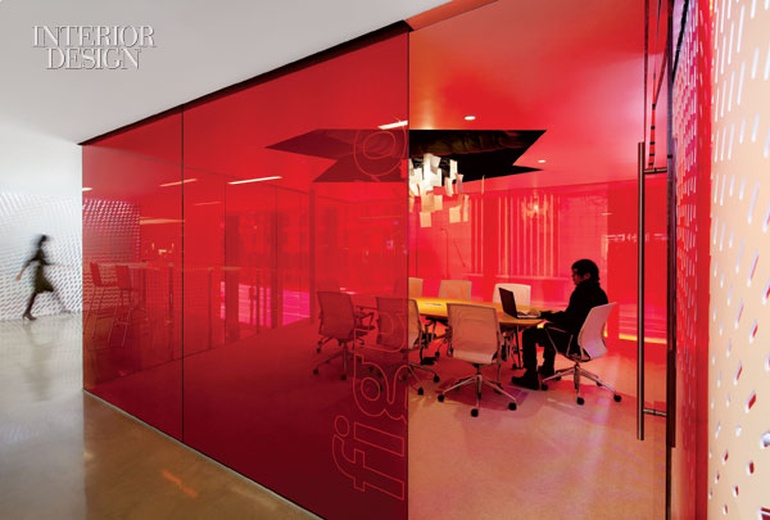 Number-one on Interior Design’s list of the top Giants firms for 32 years, Gensler had been at the same Los Angeles address for two of those three decades. And the office resembled, to put it kindly, a generic law firm—a tired one at that. Finally, the lease was ending. Though the economy was still in the doldrums, a glimmer of light shone at the end of the tunnel. So what did principal and managing director Robert Jernigan do? Shake things up. In a big way.

Gensler opted to move from Santa Monica to downtown. In L.A., where geography and traffic patterns rule, relocation was a disconcerting prospect for a good many Genslerites. But downtown held incomparable draws starting with sheer square footage. Gensler needed desk space and parking space for current staff, plus room to expand. (That was prescient, as 120 more employees have since signed on, bringing the count up to 330.) A new setting would also enable Gensler to explore one of the few sectors underrepresented in its extensive portfolio: interiors for creative businesses. "Why wouldn't we experiment on ourselves?" Jernigan mused. Creative is as creative does.

The site, an office complex from 1972, stretches a full block, with twin towers flanking a low building. Originally Bank of America's Southern California headquarters, it had been empty for nearly 10 years before Gensler arrived. Major enticements were street presence, another downtown draw, and a rear plaza featuring a distinctive fountain-sculpture that once made a cameo in the movie Marathon Man. The building's ground level, a glass box wrapped in 26-foot-high windows, would prove the ultimate marketing tool-neighbors have even been requesting tours. Above was windowless document storage. "Our job was a build-out showing respect for the property," Jernigan continues. "At the same time, it had to be innovative, showing that we practice what we preach."

Much of what Gensler preaches revolves around strategic planning. In other words, process is as important as end product. So Jernigan's deputies, design director Richard Hammond and senior designer Sabu Song, embarked on a four-month period of full-on staff engagement. They hosted presentations, organized focus groups, and asked colleagues to compile photo diaries of favorite or disliked spaces-activities to engender pride of ownership. "We did a lot of homework, talking to everyone from principals down to juniors," Song says. Hammond took responsibility for the "3-D form-making," as he calls it, while Song oversaw planning. Song: "We met in the middle." Hammond: "Where there were sparks."

Chief interventions entailed cutting a massive hole in the roof, inserting an operable skylight to cap the central atrium, and, around it, hanging a mezzanine. Bringing total square feet to 45,000, the mezzanine also alters scale. "The place became less grand, more friendly to prospective clients," Jernigan notes. From there, he shifted organization from horizontal to vertical and high-visibility. Meeting rooms stack and cantilever around the atrium. One of them enclosed in glass laminated, yes, Gensler red brightens the office-scape. Others are clad in panels of zinc or-in the case of the one dubbed the Tree House, hovering over the main lounge-translucent white polycarbonate. The different materials come through loud and clear, making the whole place vibrate with kinetic energy.

Steps from the entry, white perforated screens present Gensler's own eye test. Squint at the pattern, and you can make out a map of L.A. Opposite, an identical screen incorporates a giant monitor looping through still photography and video of worldwide projects. The best place to catch the show is a stool at the adjacent barheight table, built mostly from white solid-surfacing with a swoopy cantilever. Known as the SLO table, it's the work of students from San Luis Obispo, the location of California Polytechnic State University, where Gensler sponsors a course exploring digital design and fabrication. spray-on fireproofing throughout. Quiet is a valuable commodity in a studio with only 14 private offices. For everyone else, Gensler went for a bench system-a compact one at that. "Shrinking individual work space from an average of 9 to 6 square feet and tripling the amount of collaborative space was a device to help create community," Hammond notes. Media walls afford a bit of visual privacy.

Environmental responsibility wasn't forgotten. Chilled sails, motion-sensor lighting, mechanized window shades, and air ionization contributed to a LEED Platinum rating. Ditto for, believe it or not, transportation. No, we're not talking bicyles or subways. But Jernigan reports a decrease in drive-time to meetings in Burbank and Orange County. As for civic responsibility, Gensler conceived that main lounge as piazza to host private and public forums. To wit: L.A.'s mayoral candidates all had pitch sessions there.