A Wardrobe Makeover: Marc by Marc Jacobs' Showroom Gets an Update 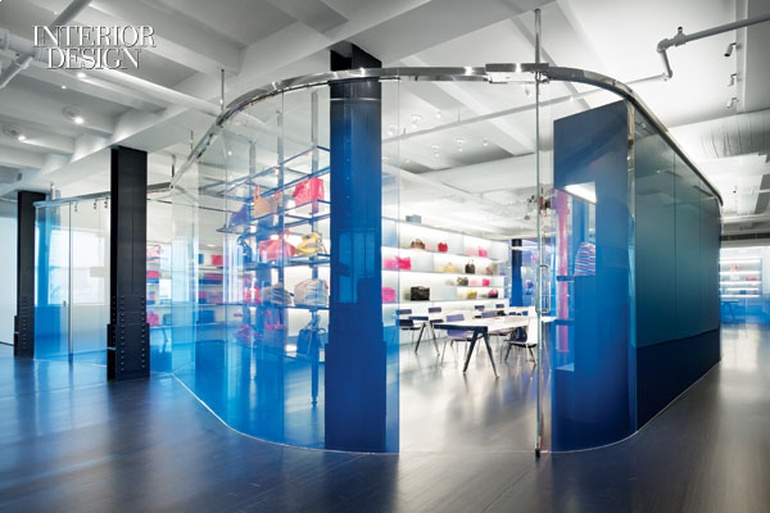 Marc by Marc Jacobs has grown exponentially since Stephan Jaklitsch completed its showroom in New York in 2001. So has the merchandise itself. "The handbags keep getting bigger!" Jaklitsch marvels, gesturing to an array of candy-colored leather totes and clutches. That's an uncharacteristic observation from Jaklitsch, who's more inclined to steer the conversation to datum lines and inflection points than to accessories trends, even after designing dozens of boutiques and workplaces for the Marc Jacobs empire and five residences for president Robert Duffy. In fact, Jaklitsch has enjoyed such a longstanding relationship with the brand—a rarity in a famously fickle industry—that he now gets tapped to refresh his own work. That includes renovating the Marc by Marc Jacobs showroom to reflect the diffusion label's evolution. "It was important to have the showroom reflect the shift in the store identity, from a bit industrial to more refined," he says. (A store identity that, of course, he also conceived.)

The client's two overall goals were seemingly mutually exclusive: Maximize daylight and airiness, but make sure that zones are distinctly carved out. In addition, the layout needed flexibility. Since the showroom plays host to buyers from around the world, whether boutiques or department stores, entourage size varies from a handful of visitors to?as many as 100—the average hourly churn during market weeks. Adding to the challenge, construction had to be finished in three months.

Jaklitsch/Gardner Architects blew open the floor plan, tearing down walls to liberate the run of windows along the rear-a move that meant locating executive offices elsewhere. He also demolished a restroom hogging another luminous corner. "I stole the light from there and filtered it through," he explains. "Plus, opening up the perimeter gained 1,000 square feet of showroom space, but it feels like way more. The subconscious effect can't be overstated."

He divvied up part of the newly expansive 6,500 square feet with laminated-glass panels that are secured by ceiling and floor tracks, forming a slightly irregular square room. The glass sandwiches film that's been digitally printed—in the label's signature blue—with a gauzy gradient pattern that progesses from denser at the base to sheer at?eye level before virtually disappearing. Without blocking sunlight or sight lines, the blue haze offers a modicum of privacy while exuding a quiet presence, flitting in and out of consciousness as you move through. To reiterate the color palette, flooring that Jaklitsch had ebonized last time is now painted midnight blue.

The glass room houses areas for women's shoes, handbags, and other accessories, separated by gleaming white shelving units backed in acid-etched mirror. "They're oriented perpendicular to that rear window wall so as not to block the flow of sunlight," Jaklitsch explains. Individual shelves, rather than being mounted at uniform heights, create a lively composition to accommodate bags of various sizes. "There's a golden zone at eye level, which is where smaller, more intimate merchandise gets placed. That's why the rhythm gets tighter there," he notes. Other wares are displayed in spare stainless-steel units that accommodate shelves or bars as desired. Everything is custom except the seating, Lievore Altherr Molina's stacking chairs with seats of leather-covered molded polypropylene.

Panels of the gradient glass also enclose the jewelry area and par­tition men's ready-to-wear from women's. The latter is a lofty sweep of space featuring rows of trestle tables, each white Corian top scored down the middle with a thin band of stainless steel. "My racing stripe," Jaklitsch says.

The tables get pushed aside during fashion-week bashes, and the pendant fixtures that normally hang directly above can be raised for more headroom. If you're lucky enough to score an invite, be sure to wear blue.