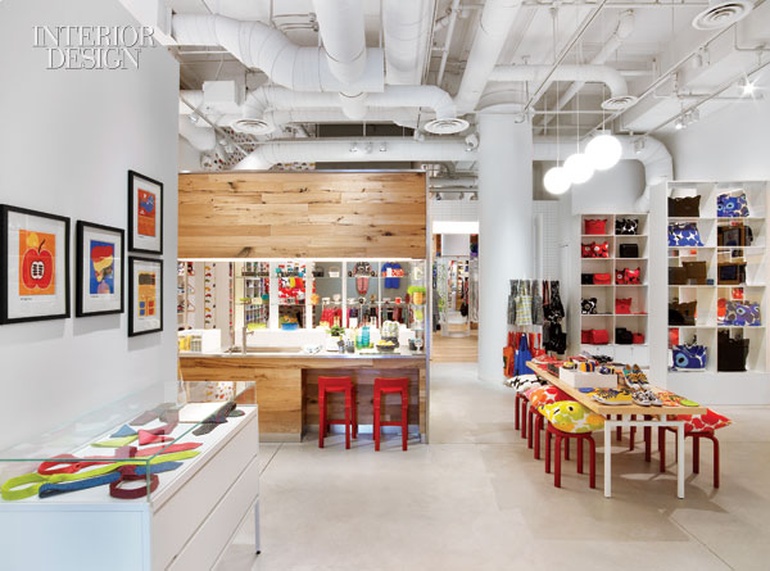 Long after those Design Research shops closed, only a few bright spots remained for Marimekko in the U.S. market. One, fittingly, is the original Design Research building's current tenant, Crate and Barrel. Some of its stores have suspended Marimekko banners from the ceilings and cherry-picked the home line. Still, the fab brand, particularly its fashions, had fallen off the radar. What to do?

Marimekko plotted an ambitious plan for a North American comeback, inaugurated by a New York store. It would be modeled on the Helsinki flagship recently renovated by the Tokyo architecture firm IMA-chalk up that distant choice, perhaps, to the mysterious stylistic affinities and linguistic similarities often noted between Finland and Japan. At the flagship, IMA architect Takashi Kobayashi explains, "There's an openness that seamlessly connects with the town outside to encourage passersby to step in and explore Marimekko." Bringing that idea to the much busier island of Manhattan was a task that fell to Studios Architecture.

Not able to travel to Helsinki, Studios principal Tom Krizmanic studied photos and plans. The latter were all metric, of course, so his team adjusted them, standardizing to common sizes for metal stock. Any questions that came up were resolved by e-mails to IMA. "We'd get answers at 3:00 in the morning, because that was their awake time," he says. "It was an around-the-clock e-mail fest."

A foil to Marimekko's carefree mix-and-match heritage, the New York store's building is a 1909 beaux arts behemoth long filled with toy showrooms. Celebrity chef Mario Batali's Italian marketplace, Eataly, now throbs with customers on most of the ground level. Upstairs, Studios had already supervised a $100 million conversion of the showrooms into offices. Because the storefronts' 1909 bay windows had disappeared, replaced by incongruous flat glass, Studios installed replicas. Historical details inside were also scant. Studios replaced the columns' missing Doric capitals, but the result is far from a textbook restoration.

Raw concrete-block partitions and parts of the brick shell got nothing more than three coats of white paint, as in Helsinki. Most of the floor in New York is newly poured concrete custom-tinted to match a sample supplied by IMA, then simply polished. "Keeping things basic architecturally lets the products stand out," Krizmanic says. "You're completely submerged in Marimekko." Cheeky print sneakers, vintage-inspired dresses, and classic striped shirts are placed on equal footing with a profusion of the more familiar tableware and bedding, plus the beanbags that are magnets for children.

Other elements picked up from Helsinki include two similar "dining" tables. One might be laid, impertinently, with shoes, the other, realistically, with dishes, glassware, and napkins and set under a pendant fixture's huge oblong shade covered in assorted black-and-white prints. With the latter vignette, you might imagine the dinner guests were about to arrive from the adjacent lounge's plush seating. The concrete floor switches in the lounge to cozier planks of matte-finished tongue-and-groove engineered oak sourced from a European manufacturer, because their width of 20 centimeters, about 7 4/5 inches, isn't commonly found in the U.S.

More blond wood-clearfinished maple, utterly Nordic in spirit-veneers a cubby wall filled with pillows, one to a square. Maybe the pattern you prefer is not available on a pillow in the cubbies. Never fear. Steel racks offer bolts of fabric that can be taken out and cut into pillows, tablecloths, or napkins by the seamster on duty in a glass-wrapped booth.

The 16-foot ceiling is even higher than that in Helsinki, and Krizmanic took full advantage by exposing ductwork and pipes and snaking a mix of energy efficient LED fixtures and metalhalide track lights between. Seizing another chance for drama, he pumped up the scale of IMA's modular elements by a few inches. "We packed the products to the roof, baby," he says with a laugh. Or suspended them Helsinki-style: In the fashion section, ranks of bold garments sway on hangers hooked onto slender ceiling-mounted rods.

Other details would surprise in a more conventionally American store. Take the vertical series of engineered-oak niches, which serve as bunks fitted with mattresses dressed in different patterned bedcovers and piled with a jumble of pillows. For the kitchen setting, Marimekko specified the white-glazed floor and wall tile that lends an unexpectedly residential handcrafted look. And the sink dropped into the island's stainless-steel counter actually works. "You could make an arugula salad here," Krizmanic suggests. What other leafy green-colorful with a European flavor-could be so perfectly on-brand?