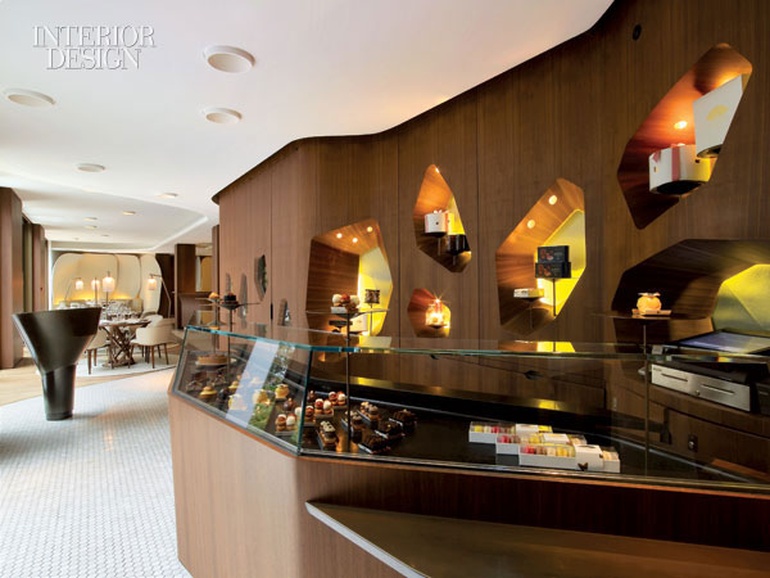 "The project of a decade." That's how Sanjit Manku describes Agence Jouin Manku's design for five dining venues at the Mandarin Oriental, Paris. And it was a project that almost didn't happen.

To get the job, firms needed to enter a competition, but there was a strict rule at the highly regarded Jouin Manku, which has won fame thanks to restaurants for chef Alain Ducasse: no competitions. Patrick Jouin and Manku also felt that the Mandarin Oriental brand was too traditional to be a good fit for them. Executives persisted, however. When they explained that what they had in mind was nothing less than the Parisian hotel of the 21st century, Jouin and Manku couldn't resist the challenge. "Even if 10 million love songs exist," Manku points out, "you can?still express something new, in your own way."

Just steps from the Musée du Louvre, such high-style fashion boutiques as Chanel, Hermès, and Valentino, and their trendy little sister, Colette, the Mandarin Oriental occupies a deco-inspired building on the Rue Saint-Honoré. The building has been completely re­imagined by Wilmotte & Associés, which enlarged the central courtyard, now an Eden of leafy trees and white camellias and magnolias. On one side of the garden is the haute cuisine restaurant, Sur Mesure, accompanied by Bar 8. On?the other side are a casual all-day café, Camélia, and Cake Shop. (Saint Honoré is the patron saint of bakers and pastry chefs.)

With characteristic savoir faire, Jouin and Manku conceived the four indoor spaces and garden dining as a totality. "Every place has a?different mood, but they're all related," Manku notes. Jouin adds, "Camélia café and Bar 8 are two faces of nature. The café is light and airy, so it merges with the garden, while the bar represents the darker side—a cave, earth, water."

The jewel in the crown is the restaurant. It's presided over by the Michelin-starred Thierry Marx, whose method of food preparation is very far from traditional French—consider him France's answer to Spain's molecular gastronomist Ferran Adrià. Jouin and Manku know well that dealing with culinary stars can be difficult, but Marx was always open-minded.

"Most top restaurants are temples to food. You don't feel comfortable. People have frozen faces," Manku continues. Here, Jouin describes the tantalizing sensation as "floating in a cloud."

At strategic spots on the walls and ceiling, simple white cotton fabric is gathered into random folds held in place by pins left clearly in sight. "Some things are better unfinished than finished. There's poetry in something not achieved," Jouin says. "Perfection is too rigid, too strict."

If the marble bar had been damaged or broken in shipping, Jouin and Manku, always prepared, had a plan B and a plan C worked out. "It was stressful. But you cut up the stress like a cake. Everyone involved gets a small piece of it," Manku says.

Luckily the gray monolith, which took four months to extract from a?quarry in Spain, arrived safely in the Mandarin bar, where the concrete slab beneath the floorboards had been reinforced with a steel structure. The other showstopper in the bar is a curtain of Venetian glass tubes lit by white LEDs. In a nook, dark-stained oak veneer is inlaid with small crystals that glitter like raindrops.

Behind the banquettes in the café rise 8-foot-high "camellia petals" surfaced in white plaster in accordance with the quiet palette overall. "We like white and wood, because they absorb the light and shadow and really let the food and people shine," Jouin says. His separate product-design firm, Patrick Jouin ID, collaborated with famed French manufacturers to produce furniture and tableware to complement the color scheme.

Jouin and Manku do use strong color occasionally-but only one at a time. Jouin points to the fanciful steel gazebo standing in a corner of the courtyard. Cascading from the top of this human-size birdcage is a multi-armed chandelier that terminates in a cluster of shades wrapped in waterproof bright red fabric, like a spray of giant tropical flowers. When you and your friends are seated on the?gazebo's round banquette, it's?hard to remember you're in the heart of a city.