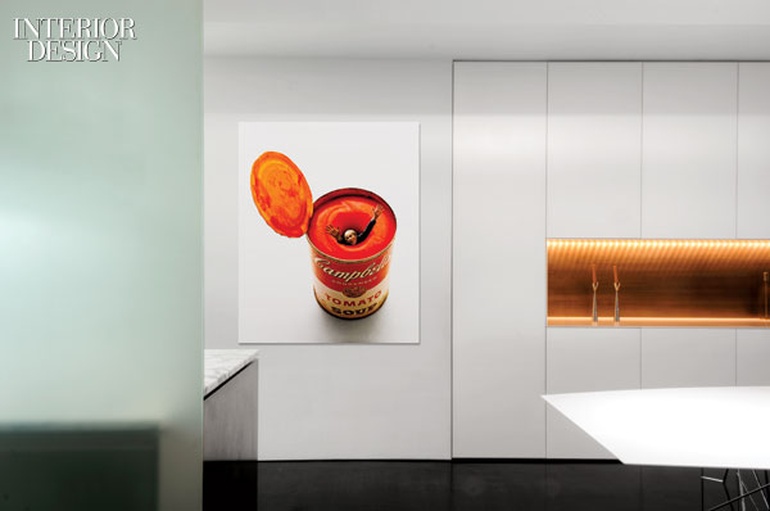 To be closer to their children’s schools, photographer Ken Fischer and his lawyer wife, Robin Cohen, decided to move from a downtown loft to an Upper West Side duplex. But they worried about feeling claustrophobic. Though their new apartment was 4,000 square feet, it was chopped up into rooms that closed off the views, and the ceilings were only 8 ½ feet.

Fortunately, West Chin Architect knew just how to open things up. Upstairs, a boxy kitchen was banished in favor of a streamlined version that flows, on one side, into a den and, on the other, intomade-for-entertaining dining and living areas. Tucking built-ins into corners also kept sightlinesclear.“Wherever there was dead space,” West Chin says, “we added shelves.” When you step into the widened entry, you can now see from one end of the apartment to the other—and beyond.

For all the openness, however, zones are distinct. The corner master suite remains a private parental retreat, thanks to an automatic pocket door on a 15-second timer. Another corner comprises Fischer’s studio and Cohen’s home office. Downstairs is the domain of the children.

Cabinetry in their playroom incorporates a microwave, popcorn-ready, and a half-fridge, juice-box stocked— parents don’t like children traipsing in and out of the kitchen all day long. For the 10-year-old son, a Star Wars fan, Chin molded a resin bunk that would look at home on a spaceship. The 12-year-old daughter’s room is a blank slate. (With Twilight posters and tennis trophies on display today, perhaps something altogether different tomorrow.)

While Chin focused on architecture, the firm’s creative director, Roseann Repetti— who happens to be his wife— handled “the beauty part,” he says. The combination of  his clean lines with her choice of furnishings, primarily contemporary Italian, puts the focus squarely on photography by Fischer’s father, Carl. He’s the one who shot most of Esquire’s covers in the 1960’s. Remember that shot of Andy Warhol, drowning in a can of Campbell’s tomato soup?