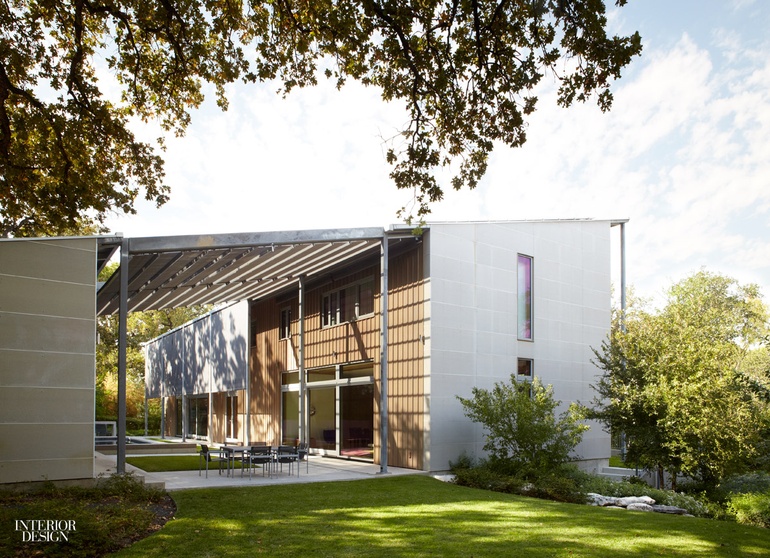 New Yorkers say it all the time: The city is no place to raise children. One of them was international banker Timothy Dowling, raised in Manhattan himself, who resolved with his wife, Kim, to relocate with their two young sons to her native Texas. But to inject a bit of the Big Apple into the Lone Star state, the Dowlings invited Ali Tayar to Austin to inspect their newly acquired property there. Like a true New Yorker, the Parallel Design principal wasted no time and jumped on a plane.

Years before, a friend of the Dowlings, the founder of the Tayar-designed Pop Burger restaurants, had introduced them to the architect, who subsequently designed the family’s Manhattan loft. For the Austin house, Timothy Dowling says, “Ali was the first person I thought of because he is a real problem-solver.” The lot was just under an acre at the terminus of a dead-end street in a mature suburb close to downtown. Neighboring houses included a Georgian brick and a restored mid-century modern—what Dowling terms “a mishmash,” illustrative of the city’s raffish eclecticism. Although the previous owner had razed the old house, the site was exceedingly private thanks to parklike landscaping, which remained mostly intact despite several years with no maintenance.

What emerged from Tayar’s initial sketches was a two-story rectangular block, 25 feet wide by 90 long. The visible exterior structure was envisioned as an armature of hot-dipped galvanized steel; slender steel columns, which also serve as downspouts, line the perimeter to support the eaves. “It’s certainly not a postmodern house, but Mount Vernon was an influence, in terms of the colonnade,” Tayar says.

The shed roof is pitched at an ideal angle to maximize sun exposure for the flotilla of photovoltaic panels mounted on it. Three-quarters of the house’s electricity is generated on the roof, including power for the family’s Nissan Leaf, which plugs into the wall. “Some people put in marble fireplaces, but I was attracted to solar as a cool technology that actually works,” Dowling says. Indeed, the family skipped an indoor fireplace, although there is one in the yard, attached to a circular ipe deck that nestles against a fern-cloaked retaining wall.

The architect intended the exteriors to be uniformly sheathed in wood. However, the contractor insisted on concrete panels for the facades that would bake in the Texas sun. “I’m opinionated, but he was very opinionated,” jokes Tayar. For walls sheltered under overhangs or motorized awnings, Tayar used wide cypress planks fitted with battens to cover the gaps between boards. He finished the planks with a sheer, gently pigmented stain and employed gray-painted wood for window frames to avoid the heat-gain problems of metal.

Wood extends to the interiors, too. Flooring throughout is rift-sawn white oak, a material inspiration Tayar lifted from the oak-studded Texas landscape. And the main staircase scissors around a central oak-veneer plywood stringer that serves as a solid balustrade.

The house is 5,000 square feet, plus a 350- square-foot guest wing housed in a separate structure. Upstairs, where continuous transoms bring daylight into an oak-lined internal corridor, is the master suite plus three bedrooms, one of which the boys share. Downstairs are open-plan living and dining areas, along with a minimalist kitchen with oak cabinetry and wall-to-wall garden views. In an adjacent sitting area, perforated MDF wall paneling is backed with fiberboard and fiberglass, to soften the acoustics amid the abundance of sound-reflective glass.

Throughout are vintage furnishings the Dowlings brought from their New York loft, such as a sculptural floor lamp by Vico Magistretti, Sergio Rodrigues lounge chairs, and another by George Nakashima. Art from their collection includes a lithograph by Joseph Beuys and a photograph by Lyle Ashton Harris, but Pae White’s loose-hanging tapestry woven from a digital image was newly acquired for the dining area. Among the new furniture are Tayar’s custom pieces. His breakfast table has a celadon-lacquered top, while the dining table’s travertine top seems to hover above a pair of pedestal bases cut and rolled from wide ribbons of thick bronze. The living area boasts his elm-topped cocktail tables and a low sideboard of the same material with travertine. His oak bed and cabinetry join the Nakashima chair in the master bedroom.

With two little boys running around, the couple requested that the ground floor have the capacity to be well lit after dark. Unconventionally boxy flush-mount fluorescents— Tayar gleefully likens them to Mad Men–era office lighting—were installed in long strips on the ceiling. A gridded oak egg-crate diffuser and carefully chosen tubes disperse energy efficient light that’s easy on the eyes. Yet another problem solved.