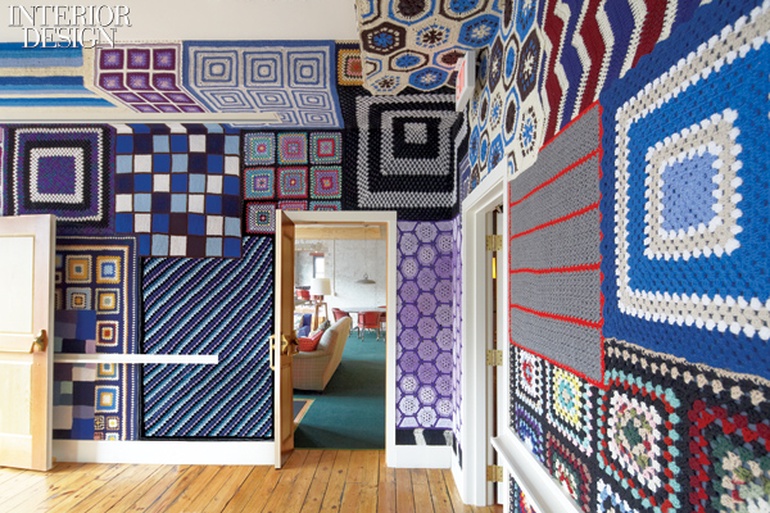 Peer House in downtown Minneapolis was a first for all players involved. Eric Dayton, born and raised in the city and a Stanford University MBA, bought the 1881 former warehouse in 2008. He and his younger brother Andrew, a lawyer, had the idea of converting it into a restaurant, bar, and retail complex, even though neither had any hospitality or real estate–development experience.

The firsts keep coming. Although the brothers’ intention was to preserve as much of the building’s original character as possible, it still needed a massive overhaul. Their choice of architect? Second cousin James Dayton, who also had no real restaurant-design experience. The plot— or minestrone—thickened when James Dayton Design brought in interior designer Janet Gridley. A long-time Minnesotan now living in Dallas, Gridley has a strong background in residential and set design. But predictably, as this story demands, the restaurant line on her resumé. was blank. And for the final kicker: Peer House was the first time any of these individuals had collaborated together on a project.

Fortunately, the 14,800-square-foot site provided the freshman team with some first-rate ingredients to work with. Although derelict when purchased, its brick and timber bones provided plenty of innate character, spread across three expansive levels, which divvied up nicely: Marvel Bar, a cocktail lounge with a speakeasy vibe and its own clandestine  entrance, occupies the basement level; Askov Finlayson, the retail component, fills approximately a third of the ground floor; and the Bachelor Farmer restaurant and bar, the project’s headliner, takes up the remainder of the ground floor and the whole second floor, where it offers a private dining room and three event spaces affectionately dubbed the rec room, library, and living room.

“The building was really a mess,” James Dayton says, though he’s quick to praise its “beautiful original textures like the hardwood flooring and brick walls.” The architect also lauds the clients’ tight, shared vision: “Eric and Andrew were hands-on and came with a clear idea of what they wanted to accomplish. Our job was to tease out the particulars.”

Given the project’s deep Minnesota-Scandinavian roots, Nordic was an obvious choice for the design concept. Not that this sophisticated crew was about to evoke reindeer sweaters or devise a menu heavy on moose meat. (OK, there is one deer head, but it’s actually a needlepoint-embellished artwork by Fr.d.rique Morrel.) In the team’s view, Nordic meant authentic, straightforward, even humble. “Nothing too tricky or zippy or nostalgic,” Gridley says. Instead they took cues from the building. “We referenced industrial, retaining most of the patina and paint surfaces,” she explains. “Nothing is too sanitized.” When time came for furnishings, Gridley and Dayton filled the entire place with antique, vintage, new, and custom pieces; and they layered on patterns, giving each space a quality all its own. For example, the private dining room of the Bachelor Farmer—so named by Alida Rockefeller Messinger, mother of the entrepreneurial brothers—is a veritable showcase of exuberantly colored, hand-knitted afghans. “It’s not granny at all,” insists the interior designer. In fact, the treatment looks hip and contemporary.

Gridley spent six months scouring the Internet for the 74 blankets, sourcing them from as far away as Reykjavik, Iceland; Townsville, Australia; Lakenheath, U.K.; and Rio Rico, Arizona, as well as nearby Woodbury, Minnesota. Their installation required little more than a heat knife and adhesive. “I started out as a photo stylist,” notes Gridley, who doesn’t knit or crochet. Nor does James Dayton, but one of his staffers got on the knitting board and “yarn-bombed” the building’s only new support column in vibrant bands of wool. The colorful totem stands in the rec room, which is outfitted with reclaimed benches ideal for movie screenings.

On the ground floor, the Bachelor Farmer’s main dining room and bar likewise include a lot of texture, both old and new. The latter comes in the form of a bar mural by artist Todd Norsten, James Dayton’s duck hunting pal. The work comprises a room-spanning line of text—“a picture for this time and place”—its letters made of what appears to be royal-blue painter’s tape. It looks so real, the architect reports, that customers have tried to peel it off. Meanwhile, in the main dining room, Gridley designed another kind of artwork, Swedish Heart, a blue-and-white wall covering, and upholstered the long banquette in bolts of mismatched fabrics.

As for the Bachelor Farmer’s menu, many of the organic ingredients come from Peer House’s rooftop garden. When President Barack Obama was at the restaurant for a fundraiser last June, he and guests enjoyed Copper River salmon and roasted chicken with confit. Had the President seen the women’s restroom, he would have appreciated its ceiling painted in Democratic-blue stripes. But the design team’s color choice was more playful than political: The ceiling in the men’s restroom has pink stripes.

Throughout the project, much of the furniture is custom. For the living room, James Dayton had tables built with plywood tops and bases of repurposed metal-shop stands. A wall hung with nearly a dozen 19th- and early 20th–century oils by unknown Swedish painters, sourced from a local gallery, evokes Scandinavia. Eric and Andrew Dayton commissioned local artists to create pieces to complement the old-world paintings. The results include a black-and-white diptych by David Coggins and Carlos Amorales’s abstract map of the world.

Marvel, the basement-level lounge, is no less artisanal. For the floor, Gridley assembled what she calls a “patchwork rug” of Spanish tiles, each a different pattern. It anchors the slender room lined with James Dayton’s 30-foot-long marble-topped bar on one side and booths upholstered in Merlot-hued leather on the other.

The store, Askov Finlayson, named after two northern Minnesota towns, is the piece of the puzzle that’s most personal to the brothers Dayton. The merchandise, a mix of mostly menswear and design objects, is chosen entirely by them; some of its furnishings—the antique rug, a pair of chairs—even came from their apartments, located 5 minutes away. But retail is the one element of Peer House that the brothers were already extremely familiar with. In 1902, their great grandfather founded Dayton’s, a department store that eventually went on to become the parent company of another Minneapolis success story: Target.