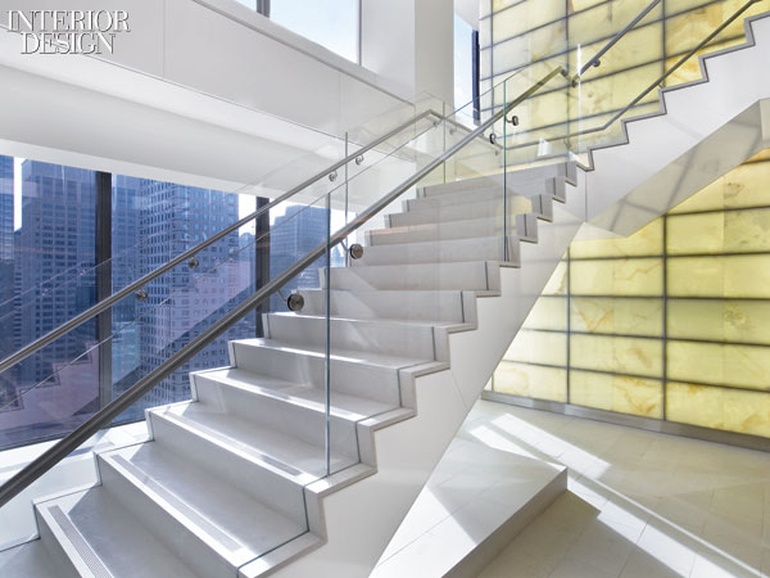 Lauren Rottet always dreamed of living in New York. The opportunity to do so hasn’t yet presented itself, so the Interior Design Hall of Fame member has done the next best thing. When Rottet Studio was renovating the Surrey hotel on the Upper East Side, she opened a satellite office downtown. And she was off and running. The satellite is now every bit as busy as its long-established counterparts in Houston, her native city, and Los Angeles, long her adopted hometown. Completing her first New York financial-services project, for an asset-management group, has made her a bona fide player in the big league in Gotham— for her and many of her clients, it’s still the center of the world. “The consultants are there. The investors are there,” she says. Even if the projects themselves are increasingly far-flung.

“This particular client’s headquarters was perfectly fine,” she continues, explaining that the catalyst for change came from the company’s foreign locations. “London and Tokyo had already ventured out designwise.” Not to be outdone, New York–based management embarked on an Internet search for “office interiors.” A few clicks later, yes, Interior Design opened up. And, yes again, it turns out that most of the crisp, confidence-building environments that management bookmarked were by Rottet Studio: Artis Capital Management in San Francisco and the law firm Paul Hastings in New York, L.A., and London.

A few phone calls brought Rottet to the asset-management company’s Midtown space. It encompassed 100,000 square feet on four levels, two of them lower in the tower and two higher. The first order of business, therefore, was internal connection for each pair. In her inimitable fashion, Rottet designed not mere circulation routes but extraordinarily graceful stairways that appear to float in front of glowing onyx walls. “The stairs provide something lovely, filled with light, for a team that works long hours,” she says. Talk about understatement. Similarly, her simple overview of the program-packed project—with its irregular floor plates and window placements—belies its complexity: “There were a lot of enclosed offices and conference rooms, plus an offset core. I oriented the plan to the sunlight and the end views, those mid-Manhattan panoramas that I love.” Her solution accommodates 300 employees, more specifically human resources, accounting, and other service personnel on the two lower levels and traders and analysts on the two upper ones. The trading floor is of course the heartbeat of operations. Since traders and analysts are glued to their desks during market hours, she made sure that nothing impeded visual access—rows of offices flanking the trading floor are fronted in glass. To further the egalitarian spirit, their size and furnishings are largely identical.

Furnishings absolutely capture the company culture. “This is a stable firm that does well in good times and bad. They are solid investors, world-savvy, with their feet on the ground,” she says. So she offered some of what was expected and a healthy dose of what was not. Finishes, for example, are cool and calm: gray-striated cream marble with limestone accents, shiny white lacquer, leather for much of the seating. For cabinetry and millwork, she chose oak, either rift-cut or flaky, for its subtle grain. Nothing flashy. Nothing screaming, “Look at me.”

At least until we get to the artwork. To know Rottet is to know there will inevitably be a terrific art program. In this case, the client stipulated 100 percent photography, a medium new to her portfolio. She began research by reaching out to a consultant connected to an expert in large-format digital photography. Purchases ultimately included a haunting color image of a corridor passing through empty museum galleries—hung, trompe l’oeil–fashion, at the end of an actual corridor—and Robert Longo’s black-and-white shots of crashing waves.

Rottet’s own artistry makes itself evident in the office’s lighting scheme. She spent hours determining the placement of coves and the best way to illuminate columns from above and below. The goal was to counteract the potentially claustrophobic effect of the low ceilings, averaging 9 feet once mechanicals and highly specialized security systems were installed. “I used plenty of tricks to make the space feel expansive when it was not,” she says. Sounding like a true New Yorker.