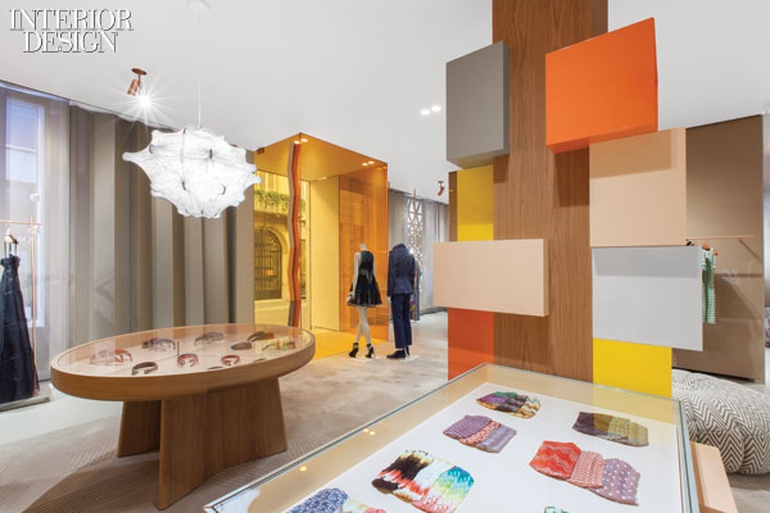 Ever since Spanish designer Patricia Urquiola arrived in Milan 23 years ago to study with the legendary Achille Castiglioni, she has shown a strong predilection for collaboration. The Interior Design Hall of Fame member’s nascent career took off thanks to her early partnership with Vico Magistretti at De Padova, and later with Piero Lissoni—another Interior Design Hall of Famer—at Lissoni Associati, where she led the design studio.

Since founding her namesake studio in 2001, Urquiola has achieved design preeminence through her singular furniture pieces for B&B Italia, Kartell, Flos, Driade, and Moroso, while also producing striking interiors, installations, and stage designs. But throughout her career, she has never lost her collaborative bent, teaming up from time to time with such design luminaries as Sung Sook Kim and Eliana Gerotto to create products. So it’s natural that when Urquiola recently undertook the renovation of the 3,100-square-foot Missoni flagship store in Milan, she joined forces with Angela Missoni, the creative director of the luxury-knitwear company and daughter of its founders, to develop a bold and innovative interior concept.

There was good reason to think the two women would have excellent creative synergy. Urquiola was more than familiar with the brand’s trademark multicolor knits. She made memorable use of the signature patterned fabrics in “Big Bags,” an inventive installation for Milan’s Salone Internazionale del Mobile in 2012. And not only does Urquiola’s wardrobe include the label’s unmistakable clothing—her first purchase, a purple Lurex scarf with long suede fringes, came from Angela Missoni’s first collection in the 1990’s—but the fashion designer owns two of Urquiola’s Tropicalia couches made of thermoplastic polymer threads in playful combinations of red, turquoise, and fuchsia.

Given the colorful men’s, women’s, and children’s clothing and accessories the boutique would display, Urquiola and Angela Missoni could well have decided to make the interior a cool, neutral backdrop against which the hot, vivid merchandise would pop. “That would have been the easy way,” Urquiola says. “But it would have been the wrong way.” The right way, the two concurred, was to create a space that replicates classic Missoni zigzag, striped, and patchwork patterns on its walls, floors, ceilings, and fittings. “The Missoni ‘language’ is eclectic and versatile enough to be translated in this manner,” Missoni says. “It’s a matter of giving form to one of its many possibilities.”

Urquiola seized on the chance to exploit “our capacity to produce textures and weavings in stained wood, pink perforated anodized aluminum, and other overlapping and enlaced materials,” she continues. The result is a sophisticated collage of colors, textures, materials, and volumes that achieves the desired effect, which the duo dubbed “zigzagging.” It begins at the windows, where vertically folding perforated aluminum panels not only conjure the zigzag pattern in three dimensions but also become as diaphanous as fine knitwear when backlit by daylight. Beige wool rugs may be monotone, but they feature a raised-pile pattern that echoes the oak parquet underneath and appears on walls as either sheets of cell-cast acrylic, oak paneling, or oak latticework.

Other vertical surfaces provide expanses of color. Entry to the store is through a box of yellow glass, and columns and partitions are faced in brilliant red, pale blue, or soft gray back-painted glass. For accessories, lacquered-wood displays—glass-topped tables, stacked cubes, illuminated cases clustered on columns—offer additional color bursts. Clothing hangs on simple rods of copper-tinted steel; the same metal is used for a large dome pendant and myriad spotlights.

In spite of all the pattern, texture, and color, the ensemble coheres, providing a lively environment in which the merchandise remains the main event. Urquiola is particularly masterful in her handling of the contrast between glossy and matte surfaces, using it to draw the customer’s eye to the clothing and accessories without any exaggerated emphasis. The designer credits Missoni with identifying this quality as an essential part of the brand’s DNA—instantly recognizable fashion that manages to be attention-getting while remaining completely integrated into a world of luxury style and taste. It’s a tension that the new store embodies. “The moment you find your comfort zone, that area of stability, then you must go beyond it,” Urquiola says. “What were once your boundaries become the new terrain for you to work with. That’s where you begin to explore.” It’s no surprise then that the zigzagging concept will soon appear in Missoni boutiques as far afield as New Delhi; Riyadh, Saudi Arabia; and Doha, Qatar.