Peak Performance: A Mega-Office for Adobe by Rapt and WRNS

May 27, 2013
By William Bostwick
View Slideshow 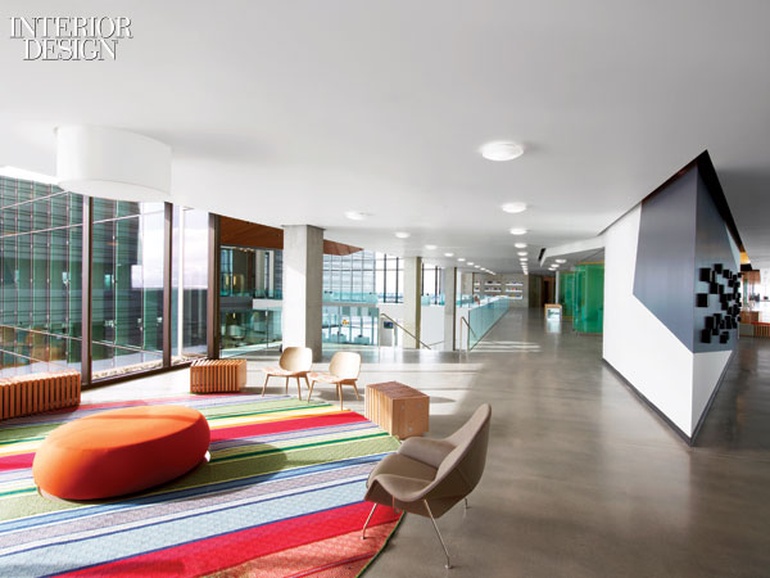 “Are you kidding me?” that’s what WRNS Studio partner Bryan Shiles remembers saying to himself when he first saw the site for Adobe Systems’s new regional office. Lehi, a tech-industry boomtown that Utah optimistically calls Silicon Slope, is on the high desert plain between Salt Lake City and Provo. Shiles describes the landscape as “spectacular two mountain ranges, a lake occupied by worthless, exurban dreck.” There’s McDonald’s and 7-eleven. To make matters worse, the 40-acre plot Adobe had chosen is split clean in two by the faceless asphalt ribbon of interstate 15.

Shiles, however, began to see that obstructive highway as an apt metaphor for the unique character of the project. The more he thought about the setting—the ethereal beauty of nature as backdrop, everyday ugliness as foreground—the more that dichotomy seemed to echo the challenge of representing, in glass and steel, Adobe’s intangible world of digital design. Aesthetics and tectonics. Art and life. And a highway runs through it.

?Headquartered 800 miles away, in San Jose, California, Adobe was at a crossroads. What had started as a design software company had just bought the Utah-based Web-analytics company Omniture and therefore needed a facility to gather activities under one roof while capturing an expanded identity. Adobe’s next move was atypical: hiring the interiors firm Rapt Studio, which then helped select WRNS as building architect. The result was Adobe’s third-largest U.S. location, a four-story, 280,000-square-foot structure that comprises two wings, one built right over the interstate.

Rapt and WRNS decided to focus not on what Adobe makes, its products and services, but on what it does. “We peppered the spaces with references to the crazy range of creative output the products allow,” Rapt design principal David Galullo says. The four levels are broadly themed: entertainment, sports, work, and dining. one conference room’s windows are printed with quotations from a mix of enlightened minds: Jackson Pollock, Muhammad Ali...Adobe cofounder Chuck Geschke. “The idea is that the innovation Pollock brought to art is just as important as Ali’s in sports or Geschke’s in software,” Galullo explains. “We show that Adobe isn’t just for creative directors at ad agencies anymore.”

Adobe’s venture into analytics is referenced in hip, data-visualization graphics such as the white-on-black interconnected nodes drawn on a wall with a Sharpie by tattoo artist Mike Giant. Another mural, spray-painted by Los Angeles street artist El Mac, depicts a child drawing, a reference to the Adobe art tool illustrator. “You’d think El Mac would be the furthest remove from the digitalization of art,” Galullo says. But the artist paints from photographs digitally manipulated on his iPhone with Adobe’s Photoshop, naturally and behind the paint is a subtle gradient of binary code.

The architecture has to accommodate a hyper-energetic staff of 1,100. “These guys get up at 6:00 Am, go heli-skiing, come to work, then climb a mountain,” Shiles says. Galullo continues, “We learned they’d meet anywhere. Sometimes with AV equipment, sometimes not. In a conference room, in a lounge. on a chair lift.” So, along with conventional conference rooms, he gave Adobe open, flexible space with multiple possible gathering places. They start in the lobby, where, steps from a freestanding fireplace, interactive monitors allow teams to videoconference with coworkers in places as far-flung as New York and Tokyo. For breaks, the vast light-filled atrium offers Ping-Pong and billiard tables. “Sometimes you need to blow off some steam at 2:00 PM. That’s just part of the creative process,” Galullo says. Visitors find themselves in the midst of the action as soon as they walk in dodging Ping-Pong balls, snooping on open meetings.

Like Adobe employees, the building draws energy from the outside world, including that pesky highway. “The site plan mimics what’s around it. The wings like mountain ranges, cradling a green space, and the freeway like a great river flowing,” Shiles explains. The energy gathered then radiates back out, as an “an active billboard” for the company, he adds. On full display behind the curtain wall are meetings in conference rooms, of course, but also pick-up games on the indoor basketball court, which cantilevers over I-15 on the largest steel beams ever used in Utah.

All this is a big change for Adobe. “Their first offices in San Jose were 100 percent private,” Galullo says. “Closed doors, no energy, no informal passing of knowledge. That isn’t good for the creative process.” The Utah building buzzes with the creative tension of unexpected convergences. “If a workplace is going to be successful,” he adds, “you have to bring as many voices as you can to the conference table.” Or the chair lift.