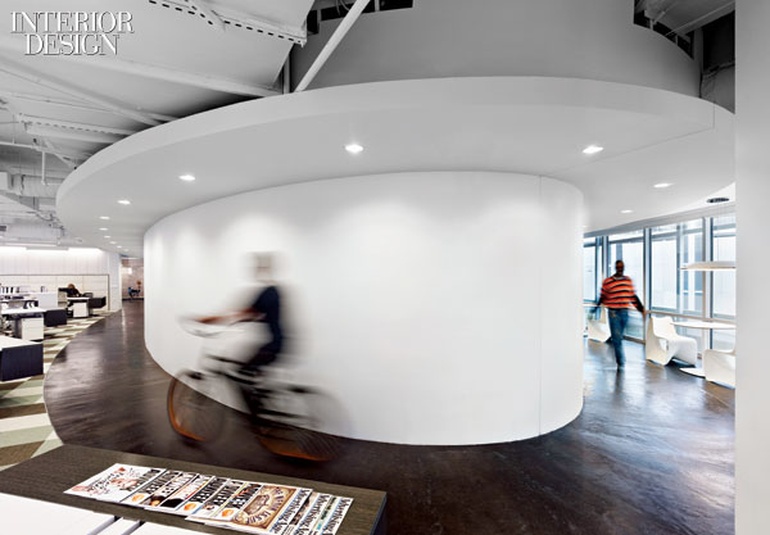 Knowing how to make a good first impression is part of Becca Weigman’s job as Ceo of TM Advertising, a Dallas subsidiary of the Interpublic Group. Prospective clients coming to a meeting at TM might very well find their name up in lights, thanks to a clause she inserted in the agency’s lease. The office is at the Victory Plaza complex, where the Dallas Mavericks play at the American Airlines Center arena, and she secured regular airtime on the Jumbotrons in the central plaza. “When clients were showing up consistently 20 minutes late, we eventually realized they were outside taking pictures of their own name on the big screens,” she says.

Making an impression on TM’s own culture was one of Weigman’s goals when she joined in 2010. At the time, the 79-year-old agency operated out of an office taken over from a utility company, in a high-rise catering mainly to financial and law firms. She immediately saw problems. “The space was totally not conducive to creativity and collaboration—unwelcoming offices and bulky cubes that were isolated from one another,” she continues. When she decided on the move to Victory Plaza, she tapped Gensler to help make her vision for TM a reality.

The main draw of the new location—a hub for media companies by day and a lively venue for basketball and concerts by night—was the 24-7 energy, a plus that outweighed such minuses as challenging space planning. Culprits were the offset core and the asymmetrical, rounded shape of the floor plates. “It was a space that had been hard to lease, because there’s not a regular column grid,” Gensler design director Christopher Goggin says, explaining that the arena’s underground garage was what had determined the core’s position. “It wouldn’t work for a law firm, but it’s perfect for an ad agency.”

At 48,000 square feet, on two large levels and a smaller one, the sunny space is open-plan, save for five offices and the elliptical enclosure that Goggin built around the core on the larger levels. These enclosures house everything from the reception area to pantries, printers, and heads-down workrooms for copywriters, video editors, and IT. For the surrounding space, Gensler broke with TM’s previous cubicle setup in favor of benching workstations that can radiate outward at any angle. The starburst they create can comfortably accommodate up to 225 employees per level, with ample space remaining for common areas. so much space, in fact, that employees have been known to transform the circulation paths around the ellipses into mini velo-dromes, riding TM-branded bicycles around and around. (Originally intended to be taken out on the neighboring Katy Trail, which follows an old railroad line through Dallas, the bikes are part of TM’s internal Beautiful You program, which encourages employee health and well-being.)

To retain the industrial edge of the raw space and make the most of the 15-foot ceilings, Gensler exposed the electrical, plumbing, and HVAC systems, then simply painted them white. Underfoot, polished concrete is predominant. For accents, Goggin laid a checkerboard of woven-vinyl squares in three colors rather than carpet tile. “We tried to not do anything you’d typically find in a commercial building,” he says. “We randomly sprinkled the vinyl throughout an otherwise neutral space.” Tangerine orange, lime green, and lemon yellow are the colors of the lockers that compensate for the benching system’s limited storage. The same yellow appears on the balustrades of the staircase that brings clients up from reception to the suite of conference rooms known as the Treehouse.

Goggin focused the conference rooms’ views onto the plaza to take advantage of Weigman’s savvy Jumbotron deal. In a sense, the plaza became a design feature, dazzling clients during the day and pumping up staff working into the wee hours.  “The plaza creates a really interesting effect at night,” Goggin says. “It’s like a club. All the flashing lights outside bleed deep into the space, totally changing the feel.” ?An interior that’s enough of a blank canvas to take on different personalities is of course a help for an agency with accounts as diverse as Bausch & Lomb and, not coincidentally, American Airlines. In addition, the aesthetic reflects the agency’s refreshed culture. “We stayed away from over-design,” Weigman says. “You buy an empty house—it’s only by living in it that you make it a home. The TM environment embodies the people who work here.”

She kept the new design under wraps until staffers walked through the door for the first time. When they reached their desks, everyone found a time-lapse video of the construction process and, to ward off any anxiety about a potentially noisy open plan, a pair of headphones. She need not have worried. Employees gave TM sufficiently high marks to earn it a spot on Advertising Age’s “Best Places To Work” list.