The House that Radio Built: This is NPR 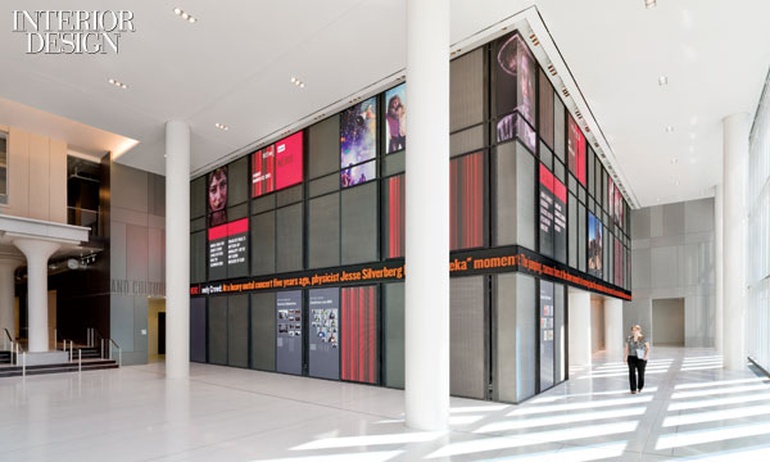 It’s an unseasonably warm spring morning in Washington, and National Public Radio is still a few days away from making the premier broadcasts from its new headquarters, but pedestrians are already peering through the windows and snapping pictures. “Oh, cool. Now that’s the point!” Maury Schlesinger exclaims. As NPR’s director of real estate and administrative services, he was the one who coordinated with Hickok Cole Architects as it transformed a 1927 art deco concrete warehouse, once occupied by the Chesapeake & Potomac Telephone Company, into a flagship for state-of-the-art radio and a destination that’s definitely tourist-map worthy. (The location is just a few blocks from the Capitol Building, in construction-crane clogged NoMA, the neighborhood north of Massachusetts Avenue.)

Standing with Schlesinger in NPR’s glass-wrapped corner lobby, Hickok Cole principal and director of interior design Sean Wayne and senior associate Jessica Maples nod appreciatively when Schlesinger remarks that moving from NPR’s former home, a forbidding structure clad in granite and travertine, to the current one, filled with natural light, is like going from a transistor radio to an interactive gaming console. The new headquarters, 330,000 square feet targeting LEED gold, combines the landmarked four-story warehouse—its rear portion partially sheared off to make room for new construction—and a seven-story office block grafted onto the back and cantilevered over the roof. Inside and out, the project is designed to tell the 43-year story of NPR the public-supported multimedia company, from its radio roots to present-day video, apps, and photojournalism. Visitors can hang out on a landscaped plaza and watch headlines scroll across the LED “ticker” mounted above the setback entrance. Or step inside the lobby, where a digital “media mosaic” is composed of floor-to-ceiling LED panels. Like oversize Android phone apps, LED tabs flash programming by and about NPR.

Behind this dynamic feature wall is Studio One, NPR’s largest production space. At 2,400 square feet, it can be used to broadcast concerts, lectures, and theater-in-the-round or to host staff meetings—heck, perhaps badminton. Maple acoustical panels, harvested from the previous building, give a sense of warmth as they moderate the energy of the sound waves.

Wayne and Maples made multiple references to the science behind the NPR sound, interpreting radio frequencies in different colors and patterns. An abstraction of FM waves, vertical fins in six shades of transparent blue jut from the exterior of the curtain wall, giving it dynamism and identity. (They also create an ever changing shadow pattern along the perimeter circulation corridors that provide employees a stunning 360-degree view, including the Capitol dome.) The wavelength theme continues with vibrantly striped carpet and wall covering. Studios are numbered with large wall graphics in a “reverberating” font. Even the reception desk is fronted in prefab acoustical panels, their wavy vertical baffles adding textural interest.

In reception and the nearby Soundbites Café—which contains concrete stadium seating for staff events—Wayne and Maples retained many of the warehouse’s 14-foot-high mushroom columns. Even loftier, the double-height newsroom is the heart of levels three and four. Reporters, producers editors, digital media staff, and bloggers  sit out in the open in this bull pen. Hence the small, quiet rooms for recording a phone interview or for meeting with two or three other people. “We call these 30-minute rooms,” Wayne says. “There are no locks or scheduling systems. We’ll see how that works out.” Seen from the outside, rooms that are in use positively glow as light shines through the colored vinyl surfacing the glass walls.

Color denotes studio hierarchy as well. When NPR’s best-known shows, Morning Edition and All Things Considered, are broadcast live, LEDs near the ceiling change from white to blue. Sprinkled throughout the levels around the newsroom, five identical pairs of recording and editing studios are green.

Wayne and Maples departed from the red-black-blue of the NPR logo to expand the way-finding palette. Its jewel tones of magenta, green, and a more electric blue look all the more vibrant against the dominant white and gray. White is used exclusively in the elevator cabs and lobbies, all the better to focus the ear on the familiar voice that announces the different floors. Can you place it? Wait, wait—don’t tell me! Welcoming you is Susan Stamberg, the veteran reporter whom another NPR staffer calls the Mother of Us All.