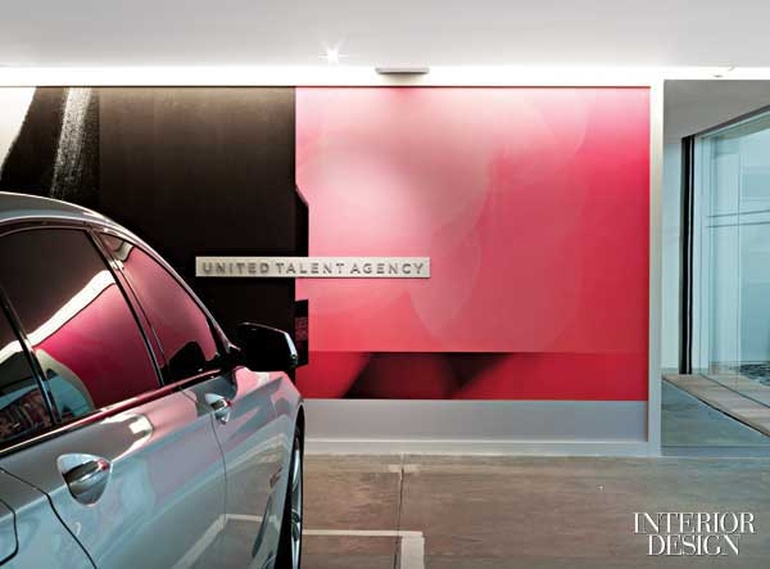 It’s a known fact. Talent agencies are as much about image as they are about business. Nowhere is this truer than in entertainment’s epicenter, Los Angeles. Two of the city’s big three agencies already had design-statement headquarters. Creative Artists Agency’s, known around town as the mother ship, is an awe-inspiring work of corporate power construed by Gensler. William Morris Endeavor’s building is a paean to Neil M. Denari Architects’s cutting-edge architectural theory. These descriptions come courtesy of Richard Riveire, principal of Rottet Studio, the firm tapped to put United Talent Agency on a design par with its peers.

Riveire’s first task was to differentiate UTA from the competition. “What you guys need,” he told CEO Jeremy Zimmer, “is a place that’s talent-friendly, comfortable, and a little more residential, while still showing the power and prestige of corporate architecture.” Like a film script, this collaboration came with a backstory. Four years ago, Rottet Studio was asked to propose a redesign of UTA’s existing boardroom, part of a cobbled-together Beverly Hills headquarters that evinced the agency’s rapid growth since its 1991 founding. “That’s when we were deciding whether to move or stay,” Zimmer recalls. “The firm’s concept for a conferencing center on top of the building was original and beautiful. My only regret was that we didn’t get a chance to build it.”

Move the agency did, though not out of Beverly Hills. “As a client-service industry, UTA needs to be close to its customers,” founding principal and Interior Design Hall of Famer Lauren Rottet adds. UTA took over the former Hilton Hotels headquarters: a pair of buildings that flank a plaza, each with four stories, one of which is below grade. Though the interiors, 120,000 square feet in total, accommodating a staff of 350, were badly cut up, some of the innate vocabulary was spot-on. To Riveire, it was like a studio lot; to Zimmer, a campus.

At this point, Zimmer stepped up to the lead. “I want this to be the best space in Los Angeles,” Riveire recalls him directing. “A place where colleagues looked forward to coming,” Zimmer adds, “to have a hospitality feeling—functional, but with buzz.” To be avoided: “Anything that told people how powerful we are.”

Zimmer’s contribution to that “best” rating is his extraordinary art collection, mostly large-scale photography. Andreas Gursky’s hyper-kinetic view of the Kuwaiti Stock Exchange looms just beyond reception. In a corridor, Thomas Struth’s image of a Eugène Delacroix painting in the Tokyo National Museum is a personal Zimmer favorite and among his earliest purchases. One of the newest, an abstract tapestry by Pae White, adapted from her photograph of crushed foil, was commissioned for a huge swath of wall in reception. But not everything is monumental. “There’s a small oil on canvas by my grandmother in my office,” Zimmer says.

In addition to the art, the quotidian workings of an agency and L.A.’s car culture dictated certain design conditions. Take the valet-parking setup. It has its own small lounge that’s also art-packed. A piece by street artist Retna keeps company with John Miller’s oversize gilded “No,” which, as Zimmer says, “is particularly appropriate since, as agents, that’s what we’re always hearing.”

Weekly all-staff meetings take place in the west, secondary building, where most of the ground floor is dedicated to a divisible multipurpose room. The east building, however, is the primary showpiece. It’s home to UTA’s six board members, including Zimmer, most of the 21 partners, the majority of the 130 agents, their assistants, and seven conference rooms that are semitransparent and well lit by clerestories.

Its bi-level screening room, on the lowest floors, is the antithesis of a black box. It’s a richly textured volume, with high-low furnishings. At the luxe end of the scale, seating—caramel-colored “Bentley banquettes,” as Riveire calls them—insures the room works equally well with sparse or SRO attendance, as was the case for Flight and This Is 40 screenings. But the glowing moiré effect on the ceiling canopy comes from nothing more than folded swaths of inexpensive polyester. Similarly, theater drapes are a low-cost hospitality velvet, glammed up with Fortuny borders.

Rising next to the screening room is Rottet Studio’s main move: a large hole, blasted through all four floors, for a switchback stair in cerused oak and tinted glass, its floor-through views stretching from side to side and front to back. Off the stair, the 9-foot-wide connecting corridors are more than mere passageways; they also function as meeting spots and galleries, their chiaroscuro-patterned wool rugs adding that aforementioned residential quality. Work areas adhere to the industry standard: Runs of agent offices have assistant workstations within easy visual and aural access. Conference rooms are lined with banquettes to accommodate overflow seating.

Far from standard, though, are the massive conference tables topped in Bardiglio marble and the degree of custom work throughout. In reception, for example, the desk comprises folded planes of black limba, a hardwood, and blizzard-white solid surfacing, and the stairway’s handrail is wrapped in hand-stitched leather. “Take away the decorative elements,” says Riveire, “and the office is actually reductive—just white, black, wood, and glass.” The vocabulary is austerely cinematic, a mise-en-scène that works equally well for clients as diverse as Johnny Depp, Gwyneth Paltrow, and Judd Apatow.