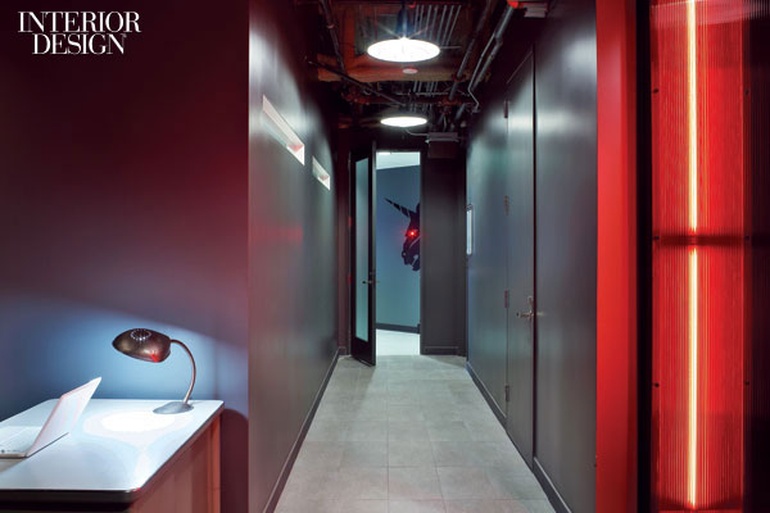 Kixeye. Kick-ass. The former is the name of a San Francisco online gaming company. The latter was its CEO’s vision for a new headquarters for his staff of 300. Kixeye had leased three high-rise floors totaling 50,000 square feet in the Financial District, “so their landlord was initially terrified of the gamers in hoodies,” reports David Galullo, CEO and design principal of Rapt Studio, the firm hired to make the virtual idea a reality.

Since intimidation looms large in Kixeye games — Battle Pirates and Backyard Monsters are examples— Rapt suggested evoking it from the start. Blood-red light columns, reminiscent of full-bodyscanners, mark the entry, on the top floor. Next comes a vintage steel security desk where guests sign a nondisclosure agreement. Only then can they leave this ante room for reception, where they’re greeted by a 7 1⁄2-foot-tall rendering of Kixeye’s logo: a scary stylized unicorn fitted with a single red LED eye, it alludes to gaming cultures, ancient and modern.

All floors are rectilinear in plan: Open workstations line the perimeter, meetin grooms sit at each corner, and private offices are near the core. Each of the two lower floors has a conference room; the boardroom and canteen are on the top floor along with reception.

The palette is predominantly white and gray with occasional shocks of color. Furnishings are a sleek mix of contemporary and classic: seating by Charles and Ray Eames, Don Chadwick, and Yves Béhar; pendant fixtures by Enrico Franzolini and Vicente Garcia Jiménez; flooring of glossy epoxy, checkerboard linoleum, or pixilated carpet tiles. Rapt makes movie references, too: The boardroom’s imposing steel light ring above a huge rectangular table channels the situation room in Dr. Strangelove, while the canteen’s exposed ceiling was inspired by the Ministry of Information in Terry Gilliam’s Brazil.