Till the Cows Come Home: Barn Conversion in Washington State 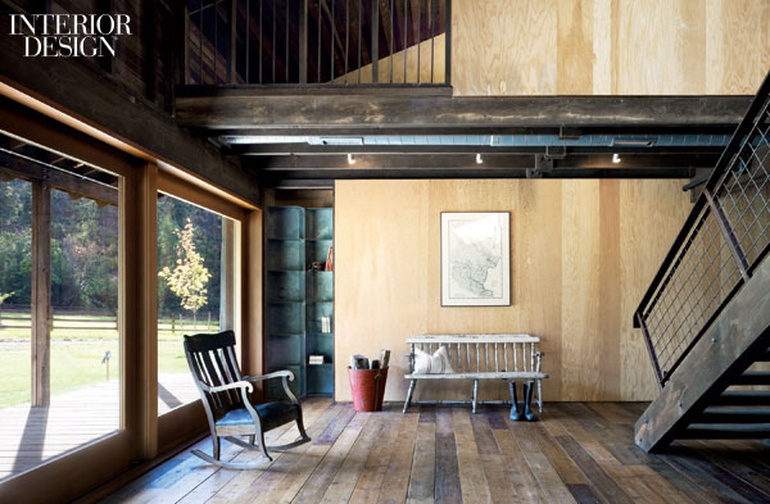 Whoa. What happened to Interior Design as a proponent of all things contemporary? Or, for that matter, to MW/Works Architecture + Design, a firm with a similar bent? In the case of this converted barn, furnished with antique and vintage finds in step with its early 20th-century origins, contemporary means a state of mind. “It’s not about style. All our moves tell an honest story related to the setting,” MW/Works principal Eric Walter begins. Principal Steve Mongillo continues the conversation: “Barns are the most modern of traditional structures. straightforward, practical, free of decoration.”

Set on 380 acres in the Washington town of Cashmere, two hours east of Seattle, the barn started out as the real thing, the keystone of a functioning dairy farm. “It smelled like cows when we first toured,” Walter reports. What that visit also revealed was a building rife with structural shortcomings. Badly listing, it was never going to transform into the weekend escape envisioned by its new owners, a Seattle couple. Mongillo and Walter broke the news straight off—they’d more or less have to demolish and rebuild.

Besides lacking a foundation, the dairy barn required I beams for reinforcement. So the siding came down, planks were numbered, and a concrete foundation was poured around the base of the bare studs. After the concrete cured, insulation went up, followed by salvaged planks of Douglas fir or cedar. A new roof was required, too—the existing one was riddled with holes. Rather than removing it, Mongillo and Walter layered Corten steel on top.

As for that original siding? It was transferred inside, where it became paneling in locations that correspond to the places it had formerly occupied.

The organization of the 3,900-square-foot interior echoes that of the dairy barn. Its milking parlor, the lower level, became the den, comprising areas for socializing and TV-watching, as well as two guest rooms and a laundry room, a root cellar, and a storeroom with a dumbwaiter that makes it easy to hoist supplies upstairs, to the former hayloft. There’s slightly less square footage there, because the den is double-height. Surrounding it are the public spaces—encompassing kitchen and pantry, dining area, and living area—and the couple’s own bedroom and bathroom.

Obviously the lower level, once home to livestock, never had flooring. Mongillo and Walter installed reclaimed planks. Above, the existing floor of the hayloft was salvageable. Connecting the two levels is no simple ladder, as there was in the past, but a gutsy steel staircase. Clearly, it’s new. Yet its manmade patina speaks the prevailing barn vernacular. Likewise treading a fine line aesthetically are two freestanding wood stoves. They could be existing elements or, just as easily, custom insertions. In fact, they’re the latter.

Other elements are purely new. “When we thought we should bring in things that were not of that rural world, we tried for contrast,” Mongillo says. That translates into plywood for walls in the entry, kitchen, bedrooms, bathrooms, and laundry room. The kitchen island is also strongly contemporary: steel with a butcherblock top. Surrounding counters are concrete. Throughout the kitchen and living-dining zone, pendant domes are basic galvanized steel. “We needed something subtle that would also throw light up into the rafters, and we needed a lot of them,” Walter notes. Meanwhile, expanses of new glass bring natural light into what was once a fairly dark environment.  A trio of sliding doors open the den to a sun porch. The kitchen got an additional window. At the opposite end of the upper level, the powerful opening that once provided access to the hayloft has now been glazed.

For furnishings, credit Nelleen Berlin Interior Design, which participated in meetings from the start—understandably, since Nelleen Berlin had renovated and decorated the couple’s seattle residence, a mid-century house with nothing rustic about it. This time, flea markets, vintage shops, and higherend antiques stores all yielded serendipitous finds, often harking back to the dairy barn. A milk crate was reincarnated as a bedside table. An antique garden gate was repurposed as a headboard. Stacked apple crates are now a dresser in a bedroom and a cabinet by the stairs. the dumbwaiter’s pulley operates on lengths of chain often found on farms.

Her commission for the barn started out on a charming note, she recounts: “It was the wife’s birthday, and her husband wanted to surprise her with something.” That “something” turned out to include a life-size wooden goat for the living area.