Rise to the Occasion: Views Inspire A Penthouse by Steven Harris 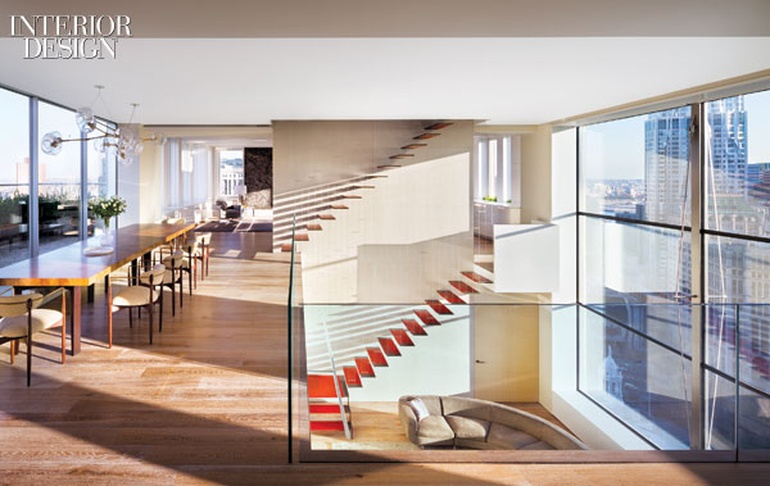 In a profession dominated by word-of-mouth referrals, walk-in clients are a rare breed. So Steven Harris didn’t have high expectations the day passersby knocked on the New York storefront that serves as the studio of Steven Harris Architects. “We’re buying an apartment down the street, and we need an architect,” they said. “Are you interested?” The Interior Design Hall of Fame member recalls thinking, with unsurprising skepticism: oh yeah. Right! Wouldn’t you?

That conversation turned out to lead, however, to a rather plum 8,000-square-foot assignment. A couple with three teenage kids, those passersby indeed purchased and moved into the apartment they’d mentioned, a duplex at the top of a converted 1930’s office building. Harris was first tasked with transforming this penthouse into a family-friendly residence, complete with self-contained guest quarters, as well as adding a glassed-in pavilion on the roof. Then, along the way, the project ballooned into something even bigger. “Once we hammered out the scope of the work, it became apparent that they’d have to move out, and they weren’t keen on leaving the building,” he explains. So they bought another duplex, down the hall, and had him renovate that, too, in order to live there temporarily while their dream home took shape.

The building’s unusually slim proportions make the original duplex “feel oddly like a town house,” Harris says. “Except that a town house doesn’t have light coming in the sides.” Nor flyover views of City Hall and the Brooklyn Bridge. Windows line all four exposures—70 double-hung windows that he replaced with single-panel tilt-and-turn versions. And a perch on the 27th and 28th floors is just right for taking in the cityscape. “Higher apartments often lose foreground views,” he explains. “You don’t have that issue here. It’s like a good landscape painting—your eye constantly moves back and forth.”

Specific views guided the layout. “I always advocate for giving the best real estate to the rooms you use the most,” Harris says. Thus he devoted one window-wrapped end of the upper level to the kitchen, where the family often congregates. Directly below, sharing the same generous 25-by-30-foot footprint, is the master bedroom, where he raised the floor slightly, so vistas can be enjoyed while lying down. The couple’s favorite gesture might just be the window in the laundry room. “To them,” he explains, “that’s the ultimate extravagance.”

Obviously the very best panorama is from the rooftop pavilion, an exercise room intended for cardio, ballet, yoga, and meditation. “Too many people relegate the gym to some dark nook,” Harris continues. “Which further discourages you from using a room you’re already trying to avoid!” Here, glass walls retract to open the space to a terrace carpeted with artificial turf.

Adding a rooftop pavilion necessitated subtracting square footage elsewhere, since the condominium conversion was already at its allow-able floor-area ratio. Cutting a hole in the ceiling of the lower level solved that problem by creating a double-height family room. With an 18-foot-high window framing the neo-gothic tower of Cass Gilbert’s Woolworth Building, the family room serves as the apartment’s heart, generally commandeered by the kids.

Opposite its side-by-side flat-screen TVs, a wall clad in shiny, subtly striated gray resin veneer anchors a vertigo-inducing staircase. The center of each cantilevered steel tread is wrapped in tobacco-brown leather, with a stitching detail inspired by Jacques Adnet furniture, and the far end appears to be supported by a trio of stainless-steel wires. Together, they resemble the strings of a giant harp—spaced 4 inches apart and connected with staggered stainless horizontals casting intriguingly stripy shadows.

“This, I'd argue, is the most elegant legally compliant balustrade on the planet,” Harris says. “We looked at a dozen options, from draped mesh to glass, and the stainless-steel wire was the most minimal.”

From the floor of the family room, the first flight of stairs takes you up to the living area, dining area, and kitchen, which form a U around the top of the void. Harris sees the latter as a spatial organizing device: “It’s the yolk to the egg. You always know where you are, relative to it. Otherwise, the apartment is so big—you’d need a trail of bread crumbs to get around.”

Upstairs and down, decor is designed to play a supporting role. “When you have 70 windows, you defer,” Harris says. “Because the space itself is so dramatic, we kept the palette relatively neutral. Colors are muted, fabrics soft.” The constellation of orbs belonging to a chandelier by Lindsey Adelman are clear glass. To do homework in the kitchen, the kids pull up white tulip chairs by Eero Saarinen. A tone-on-tone faux sable covers an ottoman in the living area. Rugs in silk and worsted provide cosseting in strategic locations.

In lieu of assertive colors, Harris relied on subtly textured finishes to temper or sculpt illumination. Window surrounds, for instance, are matte sandblasted white solid-surfacing. “It’s like faux-marble plasterwork—it holds light in such an interesting way,” he notes. The kitchen counters and backsplash are the same material in a honed finish, paired with white back-painted glass cabinet fronts.

The kitchen’s window-hugging banquette is granite. Two types of marble tile appear in the powder room. Though undeniably luxe, the materials are also hard-wearing, an important consideration with three kids, Harris notes. Should the parents ever need to, they can hose the place down.