Under the Hill: Denieuwegeneratie's Dutch Mountain 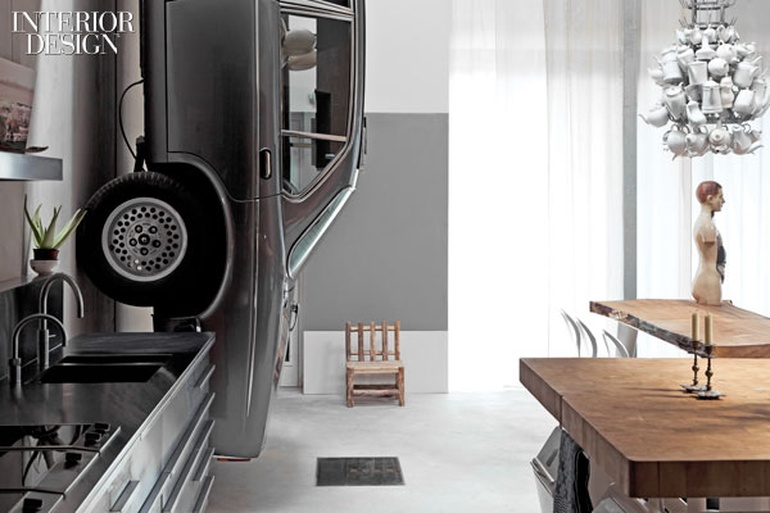 The Netherlands is famous for many things, not least its prodigious output of fine design. Varied topography, however, isn't one of its big signifiers; when people think Holland, chances are they think flat. So Dutch Mountain— the name of the first residential project from Amsterdam firm Denieuwegeneratie is a deliberate contradiction in terms, a sort of tongue-in-cheek oxymoron.

And yet the name accurately describes what the suburban Amsterdam house is: a glass, larch, concrete, and steel structure partially encased in a manmade hillside, which acts as a natural, sustainable—not to mention conversation-starting—form of thermal insulation. “Believe it or not, the house sits in what is, by Dutch standards, a hilly area,” notes principal Thomas Dieben, who, like his two coprincipals, is in his early 30’s. (Denieuwegeneratie, by the way, is Dutch for “new generation.”) “And many of those hills are artificial, having been constructed in the 19th century by local noblemen so they could survey their land.” Occupying a 1 1/2-acre plot in a verdant, government-protected area, the new hillside is also a clever response to council authorities’ requirements that the house be contextually appropriate to the landscape.

“We really challenged ourselves at several practical levels,” coprincipal Oskar Vos says. “There’s nothing more idiotic than trying to bury a house, since you need to bring in light and air.” Vos and Dieben—along with third principal, Sanne Oomen, who lives in Dutch Mountain with her husband, advertising executive Lucas Mol, and their two children—began by approaching an engineering and sustainability consultant to help them conceptualize and build their vision. “Our specific knowledge of the software part of the project wasn’t sufficient to the task,” Dieben admits. “But we believe the sustainable goals can and should mostly be reached with the actual architecture.”

Totaling 7,600 square feet, the house is essentially one large space on three staggered levels. The north side is covered by the mountain of soil, which was excavated from the site and re-constituted around the poured-concrete foundation; the south and southwest facades are glass-enclosed, surrounded by a locally sourced larch frame. “It’s very local,” Dieben jokes, “from a forest less than a half mile from here. The idea was that everywhere there wasn’t mountain, there would be wood and glass. Wood is the intermediary between the earth and the glazing.”

The glass walls leverage the south-southwest exposure to the fullest, pulling light far into the house. The entrance, opposite these windows, is embedded in the mountainside. “It’s like approaching a bunker,” Vos notes. “People are astonished when they walk through the door and they’re facing that transparent facade.” The entrance is on the top level; twin staircases descend to the double-height, split-level public space: dining and kitchen areas on the upper side; living and den areas on the lower. “Looking down from the entry gives an Alice-in-Wonderland effect. Into a mountain, through a tiny door, into this amazing volume,” says Oomen. The architects used wooden partitions to divvy up the private space in the earth-encased rear of the house. “None of the walls are structural,” says Vos, “so their configuration can be easily altered later.” The rooms are stacked in slightly irregular fashion, with a workspace, two bedrooms, and a bathroom at the top; a utility room that connects the garage to the kitchen in the middle; and the master suite on the lowest level.

The envelope is all about austerity: The materials— rough concrete walls, poured concrete flooring, glass, steel, birch plywood—are in full view and undisguised. “It speaks a language that’s honest and clean,” says Dieben. Chandeliers and pendant fixtures throughout are suspended from steel tension rods that traverse the breadth of the space. “The load-bearing structure in the roof is steel,” he explains, “so the rods could be very thin.” As for natural light, “it was tricky to find light sources for the lowest floor,” Vos says. The team solved the problem with what they call a “light chimney,” essentially a well from a skylight in the roof, through a second-floor bedroom, and down to the master bedroom some 13 feet below.

The furnishings stand in cheeky contrast to the surrounding austerity; replete with color, custom designs, and flashes of humor, it’s the collective work of the firm and the couple. “Most of the elements”—reclaimed doors and windows, a chandelier fashioned from second-hand teapots, skateboards repurposed as stair treads—“found their way in during the process,” says Ooben. “But this principle of flexibility suits the sustainable story of the house. The interiors adjust to the inhabitants, in this case, my family. We have an eclectic style. We like surprises. We like details. And we didn’t want to live in an architectonic box. The house can handle all this, which means the design succeeded.”

Vos and Diemen also cited Mol’s vast collection of art, relics, and curiosities, amassed on his extensive travels, as an important design consideration: the generously sized basement was conceived to store most of it. One particularly large piece, however, is displayed on a kitchen wall: Mol’s Daimler Double-Six from the late 1980’s. “It retired for the green dream,” jokes Oomen. But it still has a function, holding cookbooks in its seats.