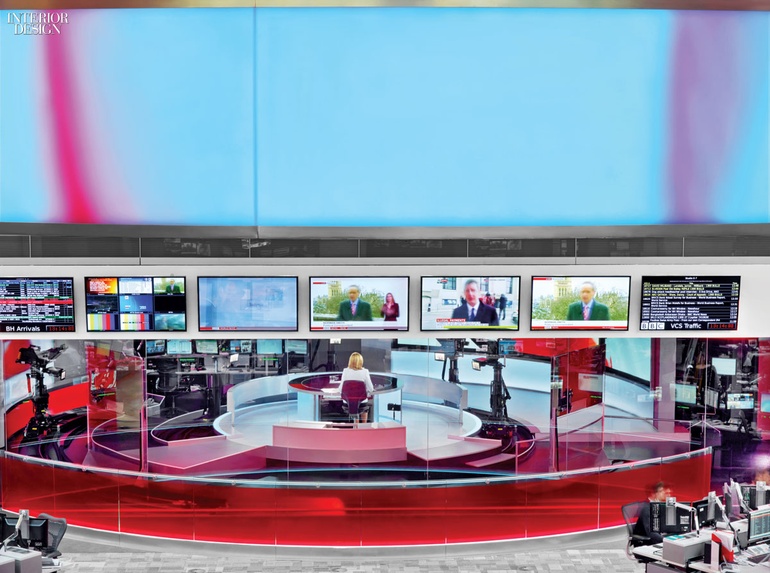 On March 18, 2013, at 1:00 in the afternoon, Greenwich Mean Time, the first domestic tele­vision news program was aired from the show­ stopping addition to British Broadcasting Cor­poration headquarters, Broadcasting House in London. The journey had been a long one, cul­minating with an interior by HOK but previously involving two additional firms as building archi­tects. MJP Architects had delivered phase one: refurbishing the original Broadcasting House from 1932 and building a separate annex across the front courtyard. Sheppard Robson stepped in for phase two: a middle structure to unify ev­erything with a glass curtain wall. This 10-­year project cost the equivalent of an eye-­watering $1.6 billion.

The result is overwhelming: 1 million square feet that not only houses Europe’s largest live­ television newsroom but also brings all the BBC’s live­ broadcast television, radio, and on­ line services under one roof for the first time—both the public­funded domestic output and the commercial international output. Up to 6,000 staff now swarm in and out of the nine­ story building every day, along with throngs of civilians. Heavyweight politicos and sports supremos slip through the speedily revolving doors, cross the public reception area, and disappear behind a second glass wall, this one blast­proof, into the heart of the building. Celeb­rities of the Will.I.Am–Black Eyed Peas variety ascend to the top level to visit the youth broad­ casters radio 1 and radio 1Xtra.

Most large broadcasters would prefer their headquarters to look lusciously expensive, a glossy monument to ratings success. But not necessarily the BBC. “A publicly funded project shouldn’t appear as if money is being squan­dered. We needed to hit that sweet spot be­tween function and modernity, nothing over­ the ­top,” HOK vice president Beate Mellwig says. Her firm fought off 102 others to provide the furnishings and materials for phase two. “However,” Mellwig continues, “broadcasting is a competitive business, and the BBC has to attract and retain the best staff.”

There are five television studios, 36 radio studios, and 60 edit ­graphic suites in addition to the enormous newsroom, a column ­free expanse. Reached by two downward­ spiraling staircases, it’s sunk below ground but sunlit by the nine ­story atrium above. “It’s more like a trading floor,” Associate Daniel Herriott says, gazing down from the ground-­level public café at ranks of journalists’ desks, two tiers of moni­tors, and a vast digital board announcing the arrival of new stories. Throbbing to one side is a swath of illuminated red, the studio that’s familiar to anyone who watches BBC News.

BBC signature reds and or­anges appear throughout. “Nearly every spot in the building is a broadcasting space, so the colors had to be camera­ ready,” Herriott explains. “Because they were tested for filming long ago, pre­-HD, they had to be tested all over again.”

On the top level, which is for radio, not tele­vision, the palette expands significantly to in­clude vibrant purples and blues. Added hipster cool is provided by retro red fridges, foosball, and a long corridor, known as the runway, that features a wall of celebrity graffiti. Purple, teal, and gray lockers cluster in pretty arrange­ments—pedestal storage is banned. Micro­waves are, too. Ditto for electric kettles: boiling water for the British cuppa is dispensed at the turn of a faucet in kitchens where counters are recycled glass.

Sustainability is everywhere. Screens are made of recycled plastic, certain chairs of re­cycled soda bottles. Other furniture comes from a local workshop that refuses to deliver beyond London’s ring road. These environmentally determined choices, along with green construc­tion practices, have garnered the project full BREEAM status, the U.K. equivalent of LEED certification.

Perhaps the biggest triumph is that an interior bristling with so much technology shows such a human touch. Break­out areas are furnished in a style that’s residential rather than corporate. Café­ type booths for private meetings feature wall covering adapted from photographs of cit­ies with BBC foreign bureaus. Conference rooms are named after fictional characters. Why not get together in Mr. Darcy or Patsy-­and­-Edina? Staffers at the BBC World service brought over idiosyncratic souvenirs—old microphones and studio paraphernalia—from its previous home, nearby, for HOK to incorporate. “Otherwise,” Herriott says, “they’d have done it themselves.”

Shedding several smaller buildings around London as part of a major, ongoing consolida­tion effort has allowed the BBC to introduce a unified technology system—one IT department, one type of training. Not to mention the huge economic payoff. Starting in 2017, savings should total $75 million per annum.