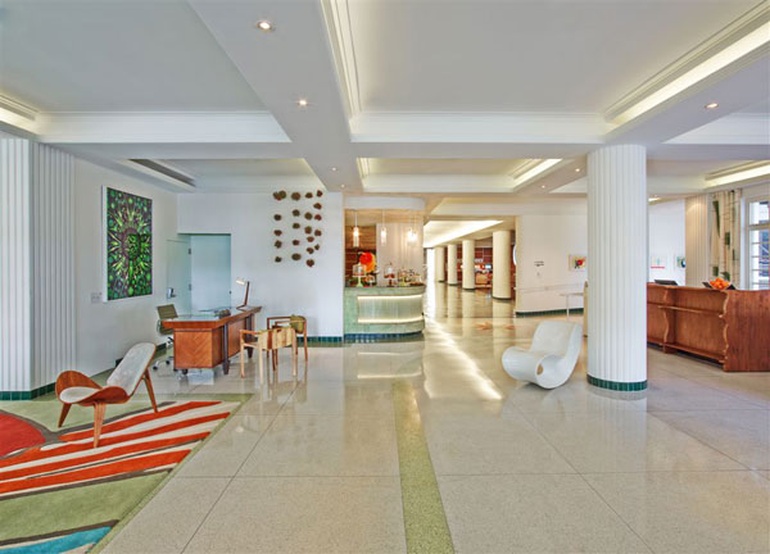 There’s no questioning Lauren Rottet’s stature as a formidable hospitality player. And the James Royal Palm in Miami Beach is the Interior Design Hall of Fame member’s largest hotel project yet, at 393 rooms divided among three deco-style towers standing on a beach-front acre. The James Royal Palm is the third James, following properties in Chicago and New York. Rottet’s charge was to revamp the towers as one cohesive package that furthermore connects with the brand’s tag line, “not predictable luxury.” Her easy-breezy solution, much like the designer herself, belies the grit and rigor that went into the $42 million renovation.

Rottet confronted a property with a past. The tale begins with the Royal Palm and the Shorecrest, adjacent hotels built in 1939 and 1940, respectively. They served the military during World War II, hosted celebrity revelry during their mid-century heyday, and fell into disrepair during the ’70’s downturn. After the Royal Palm was discovered to be structurally unsound in the late ’90’s, it was demolished, and a replica was built. At the same time, a pair of 16-story towers were added, and the Shorecrest was annexed. Rebranding as the James took place when the Denihan Hospitality Group, a repeat Rottet Studio client, began operating the whole thing, now owned by KSL Capital Partners. That’s where Rottet picks up with a narrative of her own: “Whenever I do a hotel, I invent a story line. Here, Virginia Woolf and Jean-Michel Basquiat meet on the beach, then go back to the hotel to talk.”

Most guests, however, enter from the street side, where topiaries pruned in the shape of furniture transform what could have been a forgettable pass-through into a real gathering place. From the entry, Rottet leads guests down a 75-foot-long swath of gleaming white terrazzo, retained per historic preservation ordinance. This apparently endless expanse posed organizational challenges, so Rottet lined both sides with amenities—reception and concierge desks, seating groups, lounges and bars—that encourage stops en route. At the far end, guests emerge into a landscape with two swimming pools and a rustic-chic beach café.

But not so fast. Looking for an engaging poolside read? Look no farther than the book collection lining the hand-carved walnut reception desks’ integrated shelving. (Books are either about the city or written by local authors.) Meanwhile, the original reception desk in green glass and local coral—another mandated save—has been reincarnated as the counter of the coffee bar, also the spot to stop for an afternoon aperitif. Emerald-green rear shelving displays vintage glass accessories. “The second I came up with the idea, we started collecting them,” Rottet notes.

A corner of the lobby is anchored by an immense rug in cherry red, turquoise, and grass green. “It’s way more color than I usually use, but the seating makes this feel like a guest’s living room, not a hotel lobby,” she continues, indicating the slim, 1940’s-style white sofas. Guests next encounter the James Club lounge, its two halves flanking the terrazzo passageway. On both sides, inlaid strips of white lacquer pick out the edges of walnut paneling, and porthole windows salvaged from the original hotel complete the backdrop.

The hotel already had a stairway up to the mezzanine. “But it turned its back on you,” Rottet says. She changed that with a switchback design in articulated walnut planks. Below the new balcony, another cool seating enclave comprises low chairs in patterns derived from vintage surfboards. Nothing matches. As she points out, “it’s the beach.” At the top of the stairs is the restaurant Florida Cookery. “The restaurant is lighter and brighter than the rest of the hotel. There’s little dark wood,” Rottet notes. That means more white terrazzo and a window wall overlooking the pools.

On the water theme, “An Ocean Apart” is the name she gave to the art collection assembled for the James Royal Palm. To know Rottet is to know she’s art-obsessed, and here she was curator as well as designer. Works reflect the deep multicultural roots of Miami as a whole. Locals share billing with big names, the latter not necessarily front and center. At south shore, a bar in a space formerly occupied by a laundry room, a slim Aarons photograph is surrounded by vintage shots by anonymous lensmen. What appears to be driftwood, mounted opposite the elevator lobby on the ground level, turns out to be a sculpture made of clothespins. The meeting room’s wall covering, chair upholstery, and rug bear patterns based on a painting hung nearby. As for those squiggles on the walls of most guest rooms, that’s not Cy Twombly. It’s pure Rottet—rendered in ordinary lighting cord.