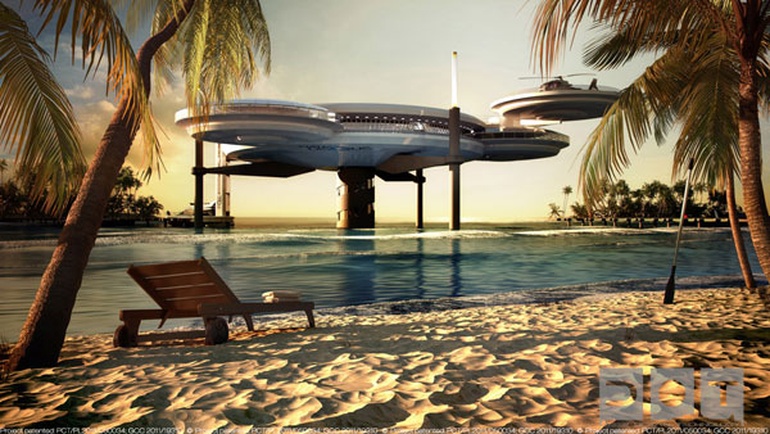 When your base team consists of engineers, scientists, plus an architect, you know your product will be interesting. But that’s an understatement when it comes to Deep Ocean Technology (DOT) and their customizable underwater hotel.

Construction started in January (in Poland) but the first planned Water Discus hotel (in Dubai) will likely not be finished until March 2015, although development began in 2010. The basic version starts at $50 million, not including local research or transportation. Location and configuration vary the price. Building takes place in a shipyard where DOT manages the plans and tools, and sees to it that everything is right. Then, the hotel is transported to the desired site and installed.

“So far the main issues are tides and waves which don't allow project to be mounted everywhere,” says a spokesperson for the company.

In Dubai, the hotel will have a diameter of 100 feet above water, and one of 160 feet when underwater. The underwater disc will be 20 feet high. There will be a second disc above water. Spread between the two will be 21 suites, a bar, and, appropriately, a dive center.

“There are no underwater hotels so far,” says a spokesperson. “So to be the first person to spend night at underwater hotel will definitely be a great experience.” How and why? Stay tuned.