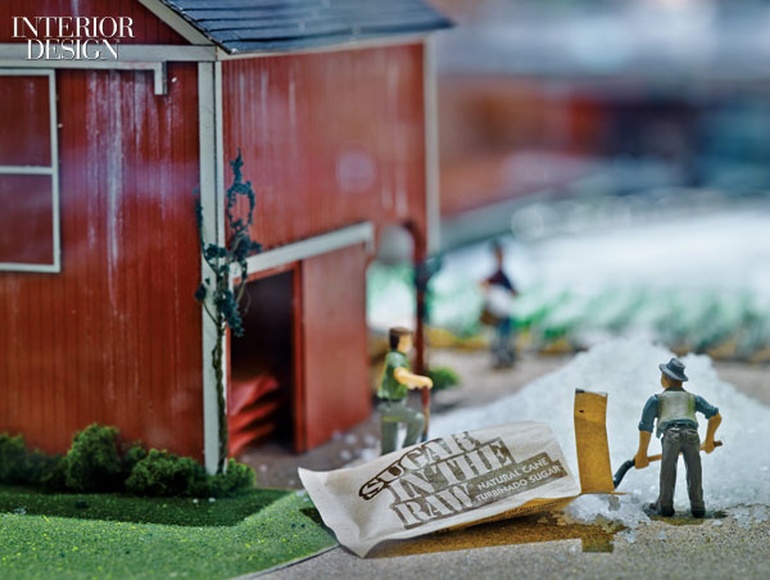 Farmers may be used to nature’s wrath, but North Dakota Farmers Union members were nevertheless shocked when a flood-gate malfunction on the Potomac River in Washington ruined their farm-to-table restaurant Farmers & Fishers. Griz Dwight of GrizForm Design Architects recalls how “7 feet of nasty, gross Potomac water seeped in slowly, making all the tables and chairs float upward, perfectly in place, then settle back as it receded.” This surreal scene seems to have inspired dwight in transforming Farmers & Fishers into Farmers Fishers Bakers, where the victuals pay homage to agricultural America, and the design takes farmhouse kitsch in a slightly twisted direction.

Sure, mulled cider simmers all day on a reproduction cookstove in a corner, and jars of pickled produce line the shelves in another. But don’t let the folksy touches fool you. Dwight would rather stab himself in the eye with a pitchfork than give in to rustic nostalgia. A clue to his Blue Velvet sense of humor is evident the second you walk in the door. Poking up amid the potted herbs set in rows on shelving—a sort of multilevel terrarium—are white. . .chicken feet. The installation is by an artist who bought actual poultry parts at a farmer’s market and cast them in resin.

Farm-themed dioramas, encased in glass boxes, form a partition in the dining area. “Something a little cheeky,” dwight offers. In Sweet and Hoe, a Lilliputian farmer shovels sugar into a normal-size paper packet. Sunday Funday depicts topless beauties sunbathing on the top of a water tower, while their vintage convertible waits below. A scene of a giant egg “frying” on the roof of a dilapidated barn, Sunny Side Up is a particular favorite of Dwight’s children, because their very own kitchen supplied the cracked shells.

Other site-specific artwork and unusual materials continue the tongue-in-cheek down-on-the-farm theme. A tangerine-painted wooden goat stands guard in a cage suspended from the ceiling. Upholstery evokes horse blankets or grandma’s lace curtains. Rusty shovel blades are attached to shafts that have sprouted branches. The treads of old tractor tires cover a wall—for both sustainability and acoustical purposes. In the private dining room, rolling pins are mounted horizontally with the assistance of Osh Kosh B’gosh overalls hardware. In the anteroom between the restrooms, it looks like someone forgot to turn off the shower: Water flows into a claw-foot tub, a kind of makeshift fountain. Oops. Things take a dark turn inside the men’s restroom, where bull-castration tools are welded into sculptures above the urinals. A small sign warns, “Please pee neatly. Don’t be an animal. Animals get fixed.” Yikes. As Dwight deadpans, “it’s good to get people slightly out of their comfort zone.”

Restroom misbehavior aside, a restaurant’s finishes and fabrics have to be bulletproof, whether you’re dealing with a boisterous nighttime bar scene or the stroller crowd during brunch. A solution was to clad many walls in reclaimed barn siding—among the elements projected to earn the project LEED Gold certification. “The wood is already beat-up, so it doesn’t matter if it gets kicked,” Dwight says. Also covering part of the ceiling, the planks provide a warm contrast to the exposed concrete columns and walls, on which an artist has stenciled homespun graffiti. A column with a missing chunk bears a white-painted arrow pointing to the problem, plus the words “urban beaver!”

One silver lining of the flood damage was the opportunity to reconfigure function areas within the meandering 9,700-square-foot space—picture a comma with irregular angles. The front was dominated by the bar in the old days. Dwight relocated it farther back, where it now doubles as a sushi bar. Then he grouped tables in various “microclimates” to suit different dining styles. On the side known as the Larder, communal tables, topped in salvaged walnut, seat 10 diners apiece. On the other side, the higher of two tiers is at the rear, where u-shape booths are tiled in small wooden squares. “Every table offers the best seat in the house, with something interesting to see,” he says. To give diners a better view of the esplanade, he replaced the narrow bifold doors along the curved front of the building with a glass wall.

Seating along the front wall, in the rear booths, and in the private dining room is banquettes. Spindle-back chairs elsewhere are Paul McCobb–inspired with a touch of whimsy. Their legs—and just the legs—are painted barn red. As a reminder, Dwight says, of the floodwater’s levitating effect on chairs at Farmers & Fishers, he provided posts high on the barn siding, so the new chairs can be hung up Shaker-style every night after the restaurant closes. Just in case.